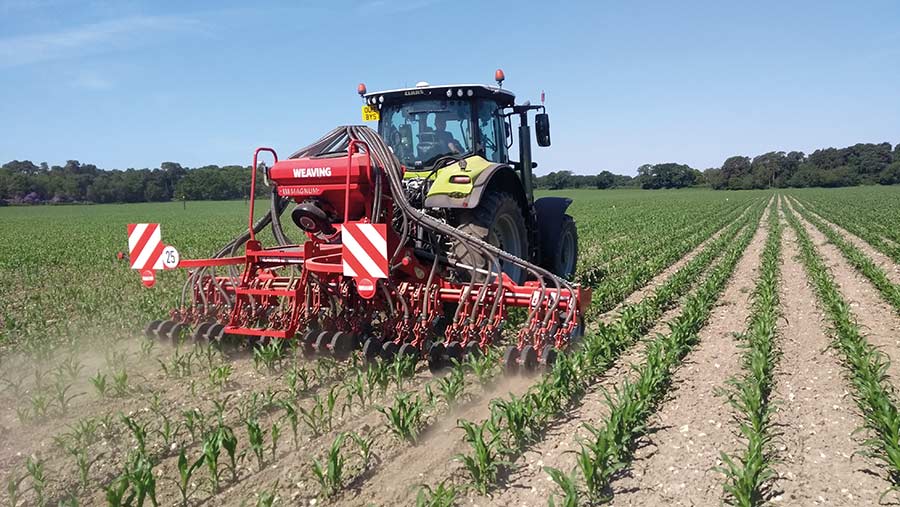 Nitrogen (N) leaching can be reduced by 61% – the equivalent of 20kg of N/ha – when maize is undersown with grass, a recent trial has demonstrated.

The challenges presented by a very wet 2019 maize harvest prompted many growers to look at undersowing their crops, especially in high-risk fields with heavy soils and sloping ground. This practice is being actively encouraged by water companies in their catchment areas.

Long-term and short-term Italian ryegrass mixes were drilled into standing maize plots at 20kg/ha (8kg/acre) on 26 June, four-and-a-half weeks after the maize was established (at the eight-leaf stage).

The plots were drilled by Shaftesbury-based contractor George Fraser using a purpose-built Weaving inter-row drill. The drill has a double-disc opener followed by rubber press wheels, which provide good seed-to-soil contact, he says.

“This led to an even emergence of grass across all of the different soil types we have used it on,” adds Mr Fraser, who has seen demand for undersowing increase markedly in the South West.

Pre-emergence herbicide was applied after drilling on 23 May at 3 litres/ha (1.2 litres/acre), and ammonium nitrate was applied in two doses – the first before drilling at 200kg/ha (80kg/acre) and the second on 15 June at the same rate.

Advice for undersowing maize with grass

The maize was harvested on 17 October and undersown plots grew more grass – between 1.8t and 4.9t dry matter (DM)/ha – by the following spring, compared with grass plots alone. 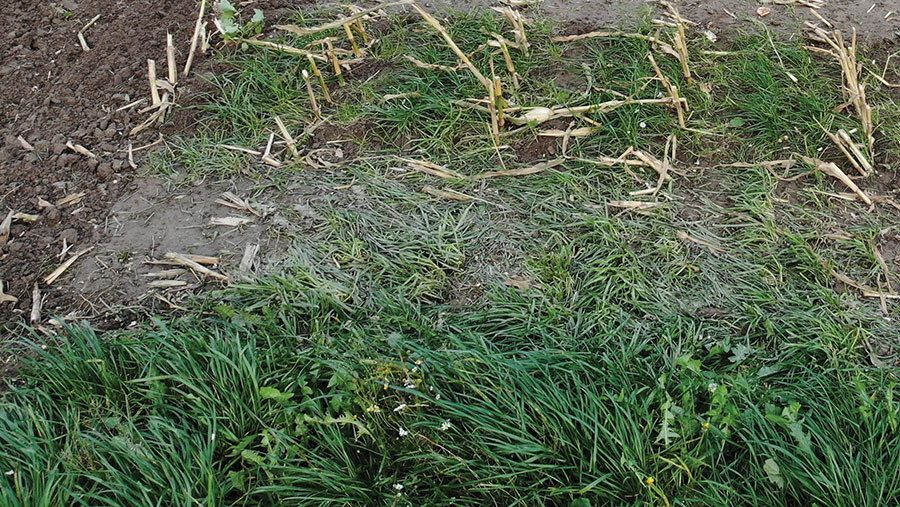 As well as permitting machinery to travel on the land sooner in comparison with maize stubble, it radically reduces the risk of N run-off into watercourses, which could cost farmers thousands of pounds in cross-compliance fines.

Based on figures from the trial, 20kg of N/ha costs about £10, so big savings can be made and more N can be captured and used by the plants, he says.

By being allowed to classify undersown maize as grass, a mixed farm is also able to use more nitrogen.

Mr Crossley explains: “Overall farm N applications are restricted to a maximum of 170kg/ha as a farm average.”

However, if at least 80% of the farmed land is in grass, the maximum overall N application rate rises to 250kg/ha (101kg/acre).

“This is mainly because the economic response of N is far higher for grass than cereals or most other crops.”

Costs and return on investment

Undersowing grass typically costs about £100/ha (£50/ha for grass seed and another £50/ha for drilling), but some water companies are now offering grants of £60-£133/ha to help farmers cover the cost.

One such company is Wessex Water. It would like to see more farmers managing maize so that soils are not left bare over the winter, to help improve water quality.

Wessex Water catchment adviser Tim Stephens says: “Where no following crop like wheat or a new grass ley is planned, we actively encourage maize growers to establish a cover crop. Post-maize harvest cover crop establishment can work well after an early harvest, but in wet years, getting the grass established in midsummer gives it a better chance of retaining nutrients and preventing soil erosion the following winter.

“We are supporting farmers in our priority catchments across the Wessex region by offering them practical advice and, in some cases, financial assistance with the cost of undersowing,” adds Mr Stephens.