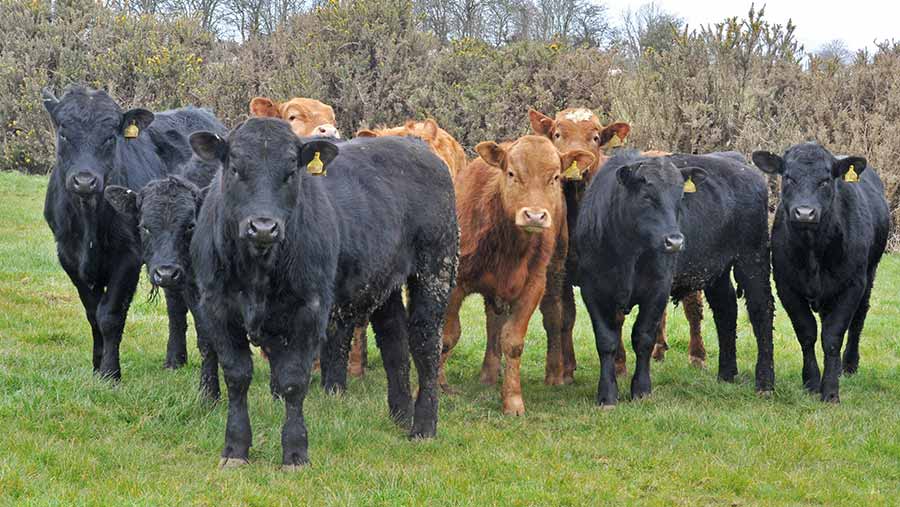 A Welsh organic livestock farm has increased suckler cow numbers by 50% by splitting fields into paddocks and rotationally grazing the herd.

Gwyn and Delyth Parry converted their system to organic in 2008 and, in addition to 500 Welsh ewes, they keep a herd of spring-calving black Limousin suckler cows.

They aim to finish the offspring off grass by 18 months.

There had been a set-stocking grazing system in place for many years but, since 2015, the Parrys have experimented with rotational grazing.

Last year, to measure the full potential of the system, 17 paddocks of equal size were created in three fields covering 5.28ha during a Farming Connect trial.

By adopting this system, increased grass growth and utilisation has given the couple the confidence to increase cow numbers from 60 to 90, without acquiring more land.

“By measuring grass and getting the animals to graze the paddocks more efficiently, we are growing better quality grass and more of it,” he says.

The Parrys’ eldest son, Eifion, who is studying agriculture at Glynllifon College, measures the grass weekly with a plate meter.

Paddocks are stocked according to the time of year, peaking at 2,500kg liveweight/ha by mid-June. Cattle are moved to fresh grazing every two days.

Over the 2017 growing season, the farm produced 694kg of liveweight per hectare despite a high level of rainfall from September onwards.

There has also been a change in breeding policy. The Stabiliser, a breed recognised as a good converter of grass into meat, was introduced into the herd three years ago and the first heifers are calving this spring.

Turnout in 2017 was done in stages to match grass growth, with stocking rate ranging from 4.5 cattle per hectare to 5.6 over the grazing season.

The aim is to finish all cattle off grass by 18 months but, in 2017, a fluke burden resulted in only a small number achieving that target.

Despite excellent grass covers, performance in the latter part of the grazing season was disappointing.

FEC analysis is regularly carried out and this detected rumen fluke and lungworm early in the grazing season.

Despite treatment, traces of immature fluke were detected in animals when they were slaughtered towards the end of the summer, which could be a reason why some didn’t perform as well as expected.

The average weight gained over the 180-day grazing period was 158kg, with some achieving 190kg, but others gaining only 114kg. Last year, cattle were housed on October 27.

From weaning at around 180 days, the cattle are weighed monthly and the Parrys noticed that, in November and December, the daily liveweight gain (DLWG) of this year’s calves was 200g below that of the previous year.

“We did faecal egg counts and those were positive for fluke. We treated them accordingly and, sure enough, the daily live weight gain increased to what we would expect,” says Mr Parry.

To get the youngstock off to a good start, concentrate inputs were doubled at housing this winter. This was fed alongside homegrown grass and red clover silages.

With the farm’s organic concentrates costing £380/t and 9t fed to 78 cattle, it is a significant cost at £43.85 a head, but Mr and Mrs Parry say this is an investment worth making to capture higher returns for selling the cattle at finishing weights instead of as stores.

“There is a short window to get the cattle finished on grass so there is no margin for error,” says Mr Parry.

“If we didn’t give the cattle more concentrates at that stage, we would not get the growth rates they are capable of.”

Poor weather this spring delayed turnout until March 19, more than a week later than in previous years.

“We have always turned out early because the land is quite free-draining in parts, but what has changed is that we can keep more cattle because we are growing more grass with rotational grazing,” says Mr Parry.