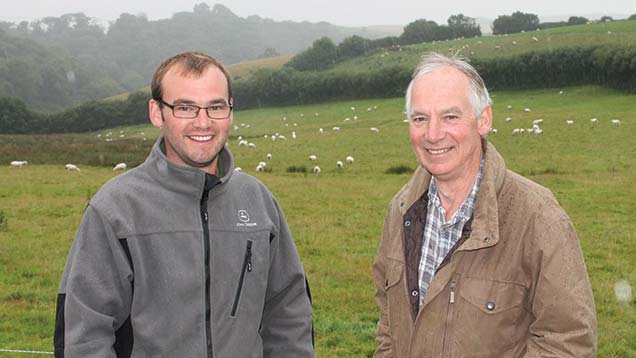 The aim of the project is to see if better grassland management can aid improved animal and financial performance.

As part of a new series, Farmers Weekly will be following the progress of three of the farms.

Philip Hambling, agriculture manager for Sainsbury’s, says: “This project is one of a series of projects aimed at helping improve resilience of lamb production, addressing the practical application of new and existing technology and techniques on our supplying farms.

“The great thing about this project is taking the theory and applying it to individual farms in different systems – so the wider group can relate both the management changes and results to their own farms.”

Paddock grazing sheep as part of Sainsbury’s grazing trial has been an “eye opener” to just how much extra grass Coombshead Farm is capable of growing.

Bill Geen and his son Matthew started the trial last August in an attempt to find out just how far they could push their stocking rates.

“We wanted to improve our production and try and get the most out of our farm,” explains Matthew.

The Geens are grazing 210 later lambing ewes and their 310 lambs on 22ha of old leys that haven’t been reseeded for more than 100 years.

Matthew says he wanted to do the trial on older leys because he wanted to test how productive it was after having very little TLC.

In total the area comprises six fields that are broken down into eight small paddocks of around 3ha.

Matthew measures grass covers every 14 days using a plate meter and the aim is to put sheep into paddocks at a pre-grazing cover of 2,300kg/DM and take them out when the residual reaches 1,400kg/DM.

On average 30 units of nitrogen has been applied per acre (72 units/ha) and 15t/acre (36t/ha) of farmyard manure has been spread on the platform throughout the year.

The Geens originally planned to rotate the sheep around the paddocks every three days, but exceptional grass growth this season has seen this extended to more than one week.

“If we took them out every three days [as originally planned] we would have lost the management of the grass and the quality would have dropped off,” explains Bill.

The Geens had to manage this exceptional grass growth by topping grass and taking a cut of silage off the fields. They also grazed 500 hoggs on the platform for one month earlier this summer to prevent grass from getting away from them.

Since the lambs were weaned on 30 July at 12 weeks of age they have been put into separate paddocks and rotated in two groups.

Despite the difficulty of having to manage too much grass, results show the quality of grass has improved.

Last August grass samples were taken and results showed the grazing platform averaged 10.8ME, with one field peaking at 11.3ME.

Independent grassland adviser Gareth Davies, who visits the farm monthly to take grass samples and soil temperatures, says this is probably because the fields have always been grazed hard because they are closest to the shed and are used post-lambing.

But grass samples taken again this August showed that in 12 months grass quality has improved from 10.8ME to 11.9ME, with the highest-quality field peaking at 12.2ME.

“In the first 12 months the farm averaged 6.5t/ha DM with the best paddock doing 8.5t and the poorest 5.9t. This is not too bad considering the low amount of fertiliser used,” says Mr Davies.

On top of this they have also made significant savings on medicine costs by halving the number of times sheep have required drenching for worms.

“We have been monitoring FECs and they have only been drenched once on 20 July.”

In comparison, the other groups of sheep on the farm have been drenched at least twice, adds Matthew.

Sheep vet Fiona Lovatt who is providing vet support to farmers taking part in the trial, says while at this stage they cannot specifically determine the effect rotational grazing has on worm burdens on pasture, they hope that more evidence gathered throughout the trial will give them aa better insight.

She adds: “But because the Geens are monitoring FECs they can be confident in reducing their wormer use.”

Matthew says they have also had no trouble with coccidiosis this year in comparison with others.

This is contributing to robust daily liveweight gains from grass, says Mr Davies.

The latest lamb weights shows lambs have been growing at an average of 262g/day from birth up to weaning to take them to 26.5kg off grass alone.

Matthew and Bill hope to improve on this next year by increasing their stocking rate. Currently they are stocked at 10 ewes/ha, but if they have a similar grass growing season next year they hope to boost this by 50%.

Next year the Geens also hope to make further savings, and reduce grass waste, by cutting their artificial fertiliser use.

“Instead we will look at applying it more strategically throughout the season,” adds Bill.

Matthew says the main thing he has learnt so far is how much grass you can grow by making better use of it.

“It has been a great grass growing year and we can’t get through it quickly enough. It has shown that we could keep a lot more sheep on our older pastures,” says Matthew.

After seeing the benefits of the trial the Geens are now managing the rest of the flock in a mob group of 350 ewes and lambs and are moving them to a fresh field every couple of days to graze grass harder.