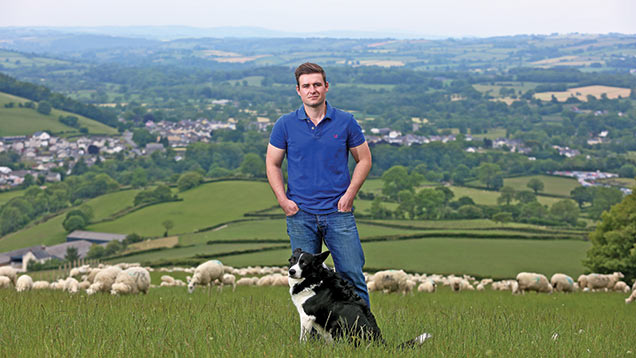 The aim of the project is to see if better grassland management can aid improved animal and financial performance.

As part of a new series, Farmers Weekly will be following the progress of three of the farms.

Mob-grazing sheep and monitoring grass growth at regular intervals has already helped improve the quality of grass at Llygadenwyn farm, even that of “ancient” leys.

“I wanted to get involved in the trial to make sure we are using the grass we grow and stock the farm to an appropriate level where we have the lowest cost of production possible.

“I also wanted to improve my knowledge of how best to graze our grass and have a system in place where we are not relying on bought-in feed,” explains Mr Jones, who returned home to farm recently after working as a school teacher.

Sheep go into the paddocks at about 2,200kg DM/ha and the aim is to graze the grass down to 1,400kg DM/ha, explains independent grassland expert Gareth Davies, of Gareth Grassland, who is advising the farmers taking part in the project and tracking their progress.

Measurements are taken with the plate meter every fortnight and results are recorded. Each field is numbered to make recording easy, with 10 fields in total. Mr Davies also visits the farm monthly to take grass samples and soil temperatures.

“We are also taking full soil samples each year to see if there is any correlation between pH and grass growth.

“The whole point is that we can relate what is happening in the field to facts,” he adds.

At lambing, ewes and lambs are set-stocked to make management easier before moving back into one mob at the end of April.

“We lamb in April, but from February onwards we set-stock ewes in two fields at 10 animals an acre once they are turned out after lambing.

“To prevent mis-mothering, they were split in three groups,” explains Mr Jones.

Even though fields were only rotationally grazed for a short period in 2014-15, results show significant improvements in quality have already been made.

In field eight, which is a long-term ley, grass analysis shows quality improved from 10.7ME in August, when the trial first began, to 11.9ME in March.

“Old pastures have been given a new lease of life. We are now grazing fields we wouldn’t have grazed with ewes and lambs before, which is allowing us to carry more stock. Fields have never looked so good.”
Shaun Hall Jones, Carmarthenshire farmer

“When we started it was a very poor-quality sward on this field. It has been really noticeable so far.

“Even the poor-quality swards with really poor grass have started to improve,” says Mr Davies.

“Old pastures have been given a new lease of life.

“We are now grazing fields we wouldn’t have grazed with ewes and lambs before, which is allowing us to carry more stock. Fields have never looked so good,” adds Mr Jones.

See also: Advice for setting up a rotational grazing system

“We reseeded two fields with rye grass last September, but we still have three fields in the rotation that are 20-plus years old.

“The other leys would be between five to eight years old.”

Mr Jones has also been taking regular measurements of lamb growth rates in preparation for the next stage of the trial, when they will comparing lamb weights/hectare with the lambs from the commercial flocks.

Weights were taken at birth and at eights weeks and Mr Jones will then be recording lamb weights fortnightly.

“I suspect we will be able to finish the other lambs just as quickly, but they will have a lower stocking density,” Mr Davies predicts.

“If we can grow 20% more grass on the farm across the same acreage that will equate to 20% more land, which is a lot.

“Buying more land isn’t an option at the moment, so it is quite exciting to see how much more we can grow,” says Mr Jones.

He adds: “The overall goal is to increase the profitability on farm and have ewes that can perform off a grass-based system.

“I would like to push this farm as far as possible and see how many ewes we can run and what kind of lamb output a hectare is achievable.”

Mr Davies says he hopes the trial will prove that by growing greater quantities of higher-quality grass, farmers will be able to reduce feed costs and improve the amount of lamb sold a hectare – thus boosting overall profitability.