A Texel flock on the Llŷn Peninsula is one year into the process of switching its tup-rearing system to one based on forage and performance recording.

Dafydd Jones of Cefn Caer Fech, Pwllheli, has been performance recording his Texels since 1990 to keep up with genetic progress, but is anticipating major changes in the farming industry.

After renting heifer ground to a spring block-calver last year, Mr Jones’s eyes were opened to the potential of well-managed grassland and the payback from improving soil health.

He has been experimenting with a friend’s rising plate metre and will start measuring grass next spring to hopefully chart a course for a future without direct payments.

Mr Jones believes he will have to transition to selling shearlings instead of mainly ram lambs and concentrate much more on marketing, rather than relying on pedigree sales. 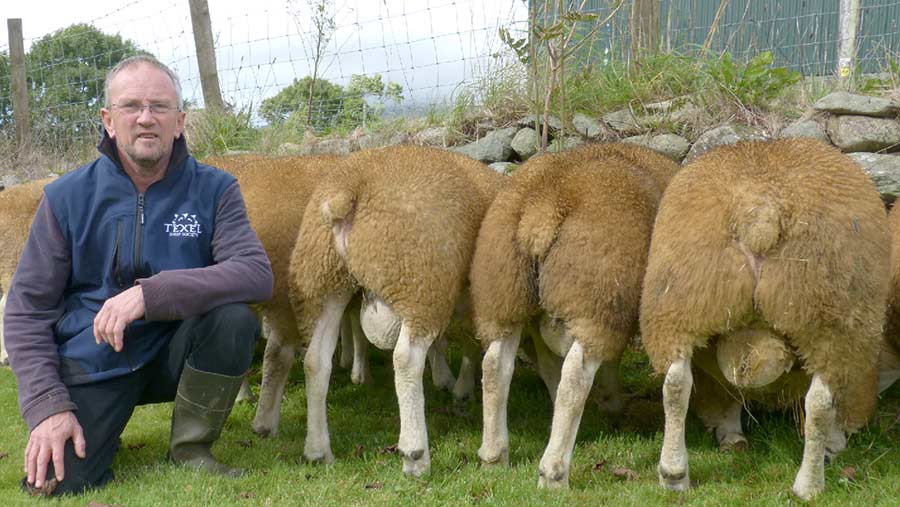 While he is certain he needs to change, Mr Jones says his current system has produced good results in the past.

Money from stock sales has helped Mr Jones and his wife, Dona, diversify farm income streams in the hope they will be able to give children Tomos and Carla equal shares when they retire from the farm.

Off-farm investments have been financed by two flock reduction sales and selling their suckler herd.

Cash generated through pedigree sales has been invested in renewables and property and was made possible by increased genetic gain through artificial insemination and embryo transfer programmes in the Texel flock, says Mr Jones.

Genetic gain has been based on sires such as Baltier Panther, Carran Upper Class and Sportsmans Tremendous. Among the rams Mr Jones hopes can take the flock forward are stock ram Hexel Bodybuilder and AI sire Knock Yardsman. 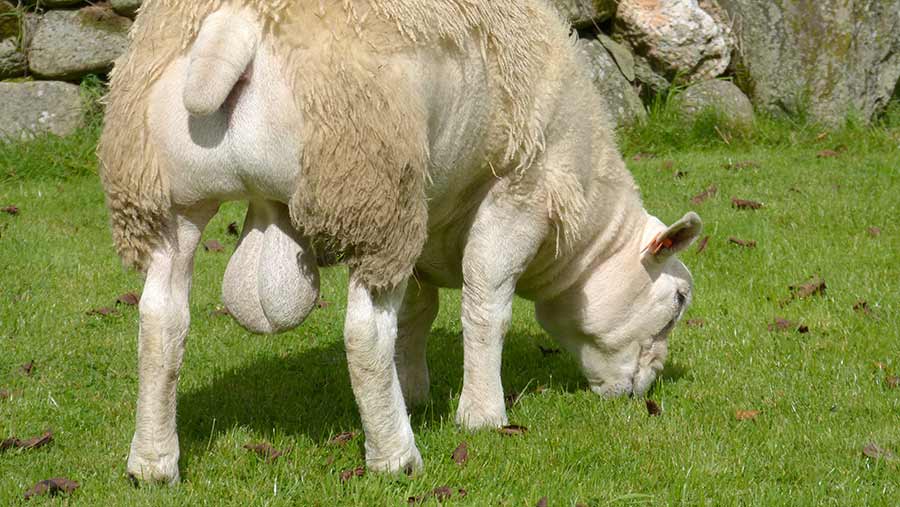 Until recently, Mr Jones believed his current system was the best option for his flock and 60ha operation, but he now wants to start adapting his system to enable his business to thrive after 2027, when direct subsidies look set to be removed.

“I’m a little worried about Brexit and subsidies going,” explains Mr Jones. “I currently feed my rams a lot and it is costing a lot of money. High-index sires with good pedigrees are valuable, but the feed eats away at profits.”

He thinks the farm is suited to intensive grazing. The largest field is 3ha and the farm receives more than 1m of rain/year.

Electric fencing has been bought, with the plan to split the larger fields into 2ha paddocks with one fence down the middle.

Having already increased overall stocking rates by about 20% since the addition of the dairy heifers, Mr Jones envisages building his Texel female numbers up to leave a stocking rate of nearly two livestock units/ha, up from 1.5 in 2013.

Mr Jones will start measuring and recording grass growth in October/November to get into the routine for next spring.

Then, when fields have had their productivity assessed, Mr Jones will identify areas for reseeding, should it be required.

Ram lambs will still be ad-lib fed next year, but will be sorted earlier for sale at 10-12 weeks in mid-May, rather than waiting until July.

Ram lambs will be drafted for sale as lambs or as future shearlings and the shearling group will be taken off hard feed and paddock-grazed before wintering on root crops for the winter of 2018-19.

“Change wont happen overnight,” explains Mr Jones. “It will be a learning curve for me, but I am improving soil quality with all the lime and Ps and Ks. Then, I will gradually try to reduce bought-in feed as forage production increases on the farm.”

Another possible alteration could be lambing a month later, to align ewe nutritional needs with the grass growth curve and so control feed costs.

Ewes are artificially inseminated in the third week of September (70-80% conception rates) and embryos are transferred (75-90% success rates) from five to 10 of the best Texel ewes into the recipients.

All donors need to have lambed and conceived once or twice, proving their milk production and mothering ability. AB Europe undertakes all artificial insemination and embryo transfer work.

Texel sheep are bred for three cycles and anything that fails to get in-lamb after this is culled. A Lleyn tup sweeps up after embryo transfer to breed recipient flock replacements.

Single-bearing shearlings get no feed until lambing. Older single-bearing ewes get a week’s feeding at 0.5kg of a 19% soya-based ewe nut for every lamb carried .

Historically, sheep have been housed for a month after lambing, but recently the sheep have had a maximum of two weeks inside, with some only getting 24-48 hours, depending on the weather.

Once outside, sheep are fed for a further four to six weeks, depending on grass availability. Ram lambs are creep-fed from the start of their lives until sale.

About 60% of sires are sold as ram lambs, with 20% finished for the prime market and 20% taken forward to sell as shearlings, which are creep-fed until a month after weaning and fed concentrates again the following spring until sale.

“It would be great to think I can slowly build interest and grow more lambs each year on forage alone, selling them off farm,” explains Mr Jones. “It will no doubt take time to build up the market for them, but I feel a change has to be made.”