In 2014 Sainsbury’s launched a two-and-a-half-year grazing project on nine farms within its lamb steering and development group.

The aim of the project is to see if better grassland management can improve animal and financial performance.

Farmers Weekly revisited Shaun Hall Jones, Llanybydder, Carmarthenshire, to find out how he is getting on 18 months into the trial. 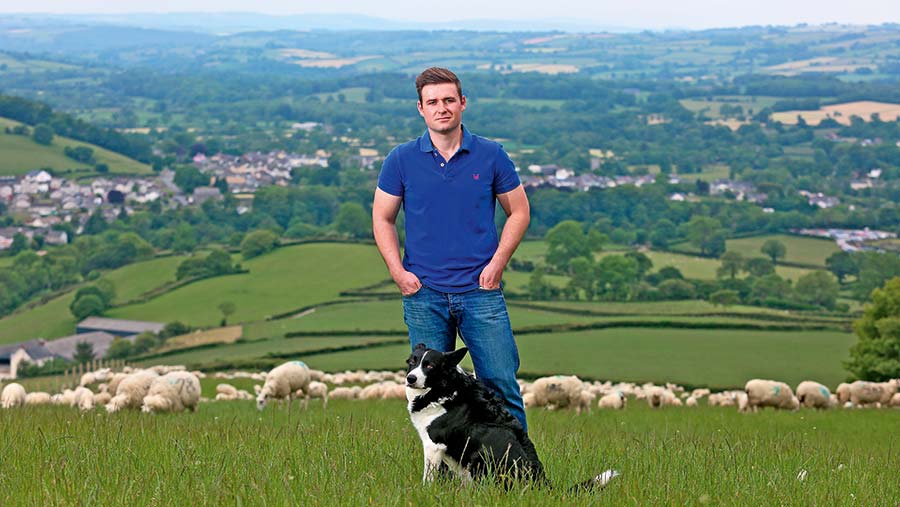 Stocking rates will be halved on the grazing platform this year at Llygadenwyn Farm, Llanybydder, after the farm failed to finish a large proportion of its fat lambs.

While about 140 lambs were sold fat out of the group of 400 pure Lleyn ewes that were rotationally grazed on a 23ha platform last spring, the business was forced to sell about 200 lambs as stores to avoid overwintering lambs, with surplus animals kept as replacements.

See also: Read article one on how Mr Jones has improved grass quality

He says his rotationally grazed fields are delivering high-energy grass averaging 11.4ME, with many results over 12ME, and he believes this approach has an integral role to play in low-cost sheep systems.

“In my opinion we were too heavily stocked. We were stocked at 18 ewes a hectare plus 25 lambs a hectare. From four weeks on the lambs are eating 0.5kg DM/day and I don’t think we accounted for that,” admits Mr Jones, who says the first year in the trial has been “a huge learning curve”.

He adds: “But I felt the grassland thrived from it. The quality of grass is far better than it has ever been.”

On the back of last year’s results, he is making changes to the system this season. As well as decreasing stocking rates on the platform, new genetics have been introduced to the flock and twin lambs are being given priority to grazing.

Post-lambing last spring, the farm’s flock of 400 pure Lleyn ewes and their offspring were rotated on a 23ha grazing platform. Sheep entered the fields when grass covers were about 2,200kg DM/ha and were taken out when residuals hit 1,400kg DM/ha.

Good-quality grazing, with metabolic energy averaging 11.4ME and  protein averaging 19% during the trial, meant early on in the season lambs grew at 250g/day on average. But at weaning the farm failed to sell any lambs, which averaged 26kg at 12 weeks.

With liveweight prices averaging £1.60/kg at the time of weaning, the farm would have realised £414.50 of weaned lamb an acre (£1,024/ha). However, as the farm sells deadweight, lambs were instead moved to a red clover block for finishing, where they were rotated round six 1ha paddocks.

“In previous years we have selected our replacement ewe lambs and killed a lot at 36kg-plus. But this year we didn’t kill any at weaning.

“Had we cashed in and sold all lambs finished on the trial ground at weaning, it would have returned £22,796, which is a fantastic return on 55 acres.

“It’s finding that balance. You have to utilise the grass to its maximum but still maintain good growth in the lambs. That’s what we are all about here – producing prime stock off grass.

“As a deadweight producer, we cannot look at any figure in isolation. Our focus is on maximising every aspect of the trial ground, which includes kg weaned, but also includes days to slaughter.”

Independent grassland adviser Gareth Davies, of Gareth Grassland, who is overseeing the trial, says that, despite not delivering the results Mr Jones would have liked, the trial has shown “encouraging results”, particularly when it comes to grass quality, with the best paddock growing at 8.5t DM/ha and the average growing at 7t DM/ha.

He adds: “We didn’t correctly match the stocking rate to the grass growth. This is no surprise and has been the case on the other farms in the trial. In the first year it is pure guesswork as there is no historical grass growth data to work from.

“To have carried the stocking rate we had last year, we would have needed to grow around 14t DM/ha and, as you can see, we grew only half that amount.”

Changes being made this year

Subsequently, stocking rates will be reduced to 12 ewes a hectare this year.

Management of lambing groups will also change. Last spring, singles and twins were mobbed together to make management easier. This year Mr Jones hopes to reduce days to slaughter by giving twin-born lambs preference to grazing and running the singles behind them to mop up pastures.

Like on many other farms, the wet autumn and spring weather made finishing lambs more difficult.

While a field was taken out of the platform and a crop of kale, rape and swedes was sown for lambs to go on to in October, conditions were so difficult that lambs had to remain on grass. “On the drier fields that we put lambs on [in the autumn] it was so wet that they just weren’t growing because dry matter content was low,” says Mr Jones.

“It was either make the decision to house them to finish them or sell them as stores.

“We decided to sell the lambs as stores as we felt that the price was acceptable and as there has not been a spike in price for the Christmas market in recent times it wasn’t worth the risk of keeping them on.”

Mr Jones says selling lambs early as stores was the best decision they could have made, given the continuing wet weather this spring, because it allowed them to focus on getting the ewes in good condition pre-tupping.

“Although we had a lot of grass about us in the autumn, I’m glad we prioritised the ewes because at least they have had the ability to milk off their backs because they were treated so much better last year. It has also allowed us to rest fields.”

Selling lambs early is already starting to pay dividends this spring, with ewes milking well, despite the challenge of slow grass growth.

There was no growth in February and only 5kg DM/day in March, explains Mr Davies.

But as a result of good ewe management in the autumn, Mr Jones’s heaviest lambs are hitting the scales at 23kg at just over one month of age – although Mr Jones concedes this could also be as a result of a change in genetics.

Last year, Mr Jones became a breeding partner for Innovis and 150 of his Lleyn ewes were implanted with Abermax embryos. The remaining 250 were served to the Lleyn for a second year. Mr Jones thinks the combination could be a great match.

“We are hoping to compare gains from the Abermax and pure Lleyns. I think our breeding [has been] too maternal, so we will probably keep some cross-bred rams to see if we can combine the best of the maternal genetics with the best terminal genetics. With the mix of breeds we are hopefully on to a winner.”

Compared with last spring, grass growth rates have been seriously low, with field covers peaking at 1,400kg DM/ha. This has been a challenge to manage, admits Mr Jones.

“This time last year we had 2,500kg DM/ha. We had lots of grass and we were always playing catch-up, which allowed us to carry that much stock early on, but this year it is a different ball game – we have no grass.”

With the worst field measuring an average grass cover of 900kg DM/ha Mr Jones is feeding ewes with twin lambs 300g of concentrate a head a day to plug the feed deficit. Meanwhile, ewes with single lambs are receiving 200g a head a day until grass growth improves.

“What is vital for me is that the lambs continue to thrive and we are feeding the ewes for the lambs, not to maintain ewe condition. They were in good enough condition pre-lambing.”

This has meant the business has had to spend more on feed than Mr Jones would have liked, but that’s a consequence of the poor weather. Currently the flock is being turned outside as they lamb, so only 135 ewes and lambs are stocked on the grazing platform; the aim is to get this up to 250 ewes, plus lambs.

“I’m hoping that as soon as the grass starts to grow at a sufficient level the twins will have preference and the singles will follow them around.

“The twins are on the rotation and we are taking covers down to about 1,200kg DM/ha. I don’t want to take them any lower than that because it will damage the sward.”

Grazing covers below 1,200kg DM/ha compromises annual yields by as much as 30%, he explains.

Despite the difficulties, Mr Jones says the challenging start to the season has focused his mind even more.

“When it is a difficult year you tend to utilise the grass a lot better. When things don’t go your way it makes you more determined to find answers.

“This year has been a massive learning curve. It has given me the thirst to go out and learn more and push myself to make it work. It isn’t all going to go to plan in the first year.”

More about the trial