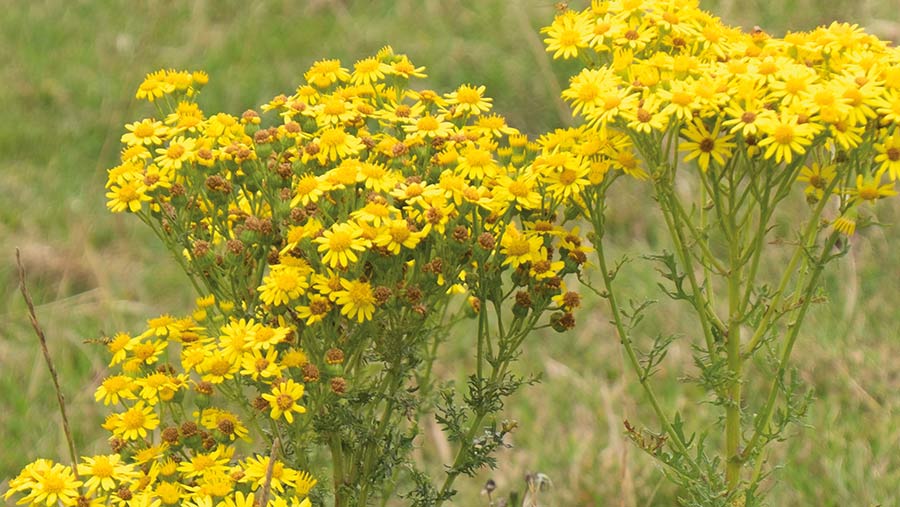 Ragwort poses the greatest risk to cattle when it is conserved, either as silage or hay, or when treated with herbicide, because it is readily eaten and has lost none of its toxicity.

Although some farmers report that cattle will sort and discard ragwort when it is present in silage, vet Mike John of the Fenton Veterinary Practice, Haverfordwest, suggests this is a gamble that should not be taken.

In fact, Mr John advises against making silage or hay in fields contaminated with ragwort, even when it is present at a low level.

The accumulation of ragwort toxins in the animal’s liver causes chronic liver problems and the more that is eaten, the greater the damage.

Cattle may also suffer an allergic reaction to ragwort because the plant contains alkaloids which cause the skin to become sensitive to UV light.

Some of these problems might not become apparent for up to 18 months, and are mostly untreatable, says Mr John.

Ragwort is very bitter when it is young, and that unpalatable taste makes cattle less inclined to eat it. But later in the year it becomes drier and more appetising.

Ragwort poisoning is more common when grass growth is low, and stock are forced to eat it.

When cattle are affected, it is mostly seen in groups of animals.

“The symptoms can be very unclear in individual animals. You are more likely to spot ragwort poisoning if you get a lot of animals that are sick at the same time,’’ says Mr John.

He advises farmers to look out for common signs.

Affected groups tend to be cattle that are fed the lowest-quality silage.

“On a dairy farm the milking cows will get the best silage, so we see very few cases in lactating dairy cows. It is more likely to be in dry cows or youngstock,” explains Mr John.

Sheep are much less susceptible to the harmful toxins in ensiled ragwort but, as many sheep enterprises also run beef cattle, he recommends that farmers in all livestock sectors have a robust ragwort control policy in place.

This should involve using a decent pair of gloves and pulling ragwort out of the ground before it goes to seed.

“Either dig a deep hole and bury it, or burn it. Deal with it immediately but, if that is not possible, it is vital that it is kept securely away from livestock because animals will readily eat it, since dried and dying ragwort is more palatable to livestock than the living plant.”