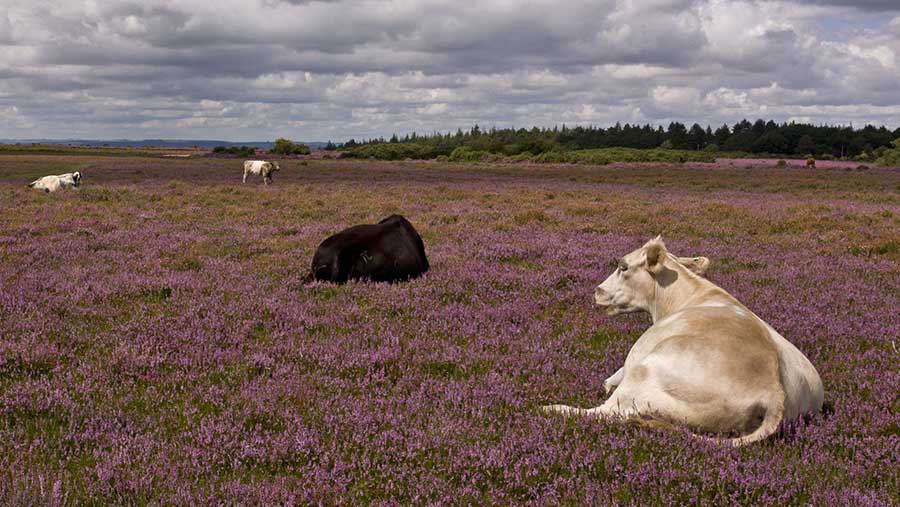 A herd of 50 cattle grazing common land in the New Forest is endangering visitors to the national park, claim walkers.

Local residents say the animals run towards a 4WD vehicle to be fed – creating a hazard for walkers as well as churning up paths and tracks at Fawley, Hampshire.

Although farmers have a right to graze cattle on the land, local residents claim that supplementary feeding in such a way is “artificially sustaining the herd” and should be banned.

See also: Farmers urged to insure against injuries to walkers

The issue was raised at a recent meeting of the Verderers’ Court, which oversees matters relating to the management of the New Forest.

At the hearing, local resident Chris Aldhous read out a statement that had been prepared by his neighbour Ashley Jenkins.

What do they want [the farmer] to do? Feed them from a table with plates, cutlery and napkins? Bournemouth Echo reader

Mr Jenkins acknowledged the unnamed farmer’s right to graze cattle but said the supplementary feeding was causing a hazard to other people and despoiling a site of natural beauty.

Mr Aldhous added: “The farmer drives his vehicle to the depths of the enclosure to distribute animal feed in order to artificially sustain the herd.”

Urging the court to prohibit the practice of feeding cattle from the vehicle, Mr Aldhous said the problem would not occur if the cattle were allowed to graze naturally.

“There would be insufficient natural resources to support the animals,” he claimed.

“The farmer appears to be using the enclosure as additional land on which to artificially maintain his cattle without thought to the consequence to the area.”

The issue has become a topic of hot debate in the comments section below the story on the Bournemouth Echo website.

One reader asked “What do they want [the farmer] to do? Feed them from a table with plates, cutlery and napkins?

“As for being a hazard, I can’t see a few cattle being more dangerous than some of the cars flying along forest roads.”

Another said: “I expect to see animals, and if they are on the roads so be it. Why do you feel like humans have the right of way? Go to the city if you don’t like it.”

Another reader pointed out that cattle and horses had been in the New Forest long before the area had become a tourist attraction.

But other respondents were more sympathetic towards the complainants and suggested that the farmer was abusing his grazing rights.

“The farmer has the right to graze his animals on the forest land, but not to artificially feed them at the same time, whereby, he is just using the land as an addition to his own.”

Another said: “The only time animals on the forest might need artificially sustaining is in times of severe snowfall (for example) when bales of hay may be distributed.

“If the farmer thinks that they are not getting in good enough condition by natural grazing then he should bring them on to his own land/barns to be fed silage and artificial feed or whatever.”

The Verderers’ Court told Farmers Weekly that the verderers were investigating the matter and would issue their official response at the court’s next meeting on 20 April.