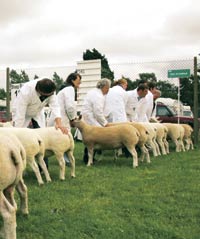 Wet weather has forced the cancellation of the Great Yorkshire Show to members of the public.

Organisers said the car parks at the showground in Harrogate could not support traffic after a period of unprecedented rain.

Making the announcement after the first day of the show on Tuesday 10 July, show director Bill Cowling said: “This has been the most difficult decision that I have ever had to make.”

“It is heartbreaking for all concerned, our exhibitors, our visitors and, of course, our staff.  The decision has been made because our car parks have become too muddy to use with any safety, and the safety of our visitors has to come first,” said Mr Cowling.

“We are also conscious of our neighbours and did not want to risk people parking inconsiderately in Harrogate.  We will be refunding those who have bought tickets in advance and talking to our exhibitors.”

He added:  “We have had more rain in the last month that ever before.  Our showground is robust and has held up well, but if we cannot park cars safely then to cancel is a most difficult decision, but it is the right one.”

All the equine classes have been cancelled and a decision is due to be made on whether further livestock showing will take place on 11 July, although either way, the show will remain cancelled to the public

The 2012 show was the 154th. It is the only time in the show’s history that it has been cancelled due to bad weather.

Previous cancellations were due to the foot-and-mouth outbreak in 2001 and the two World Wars.