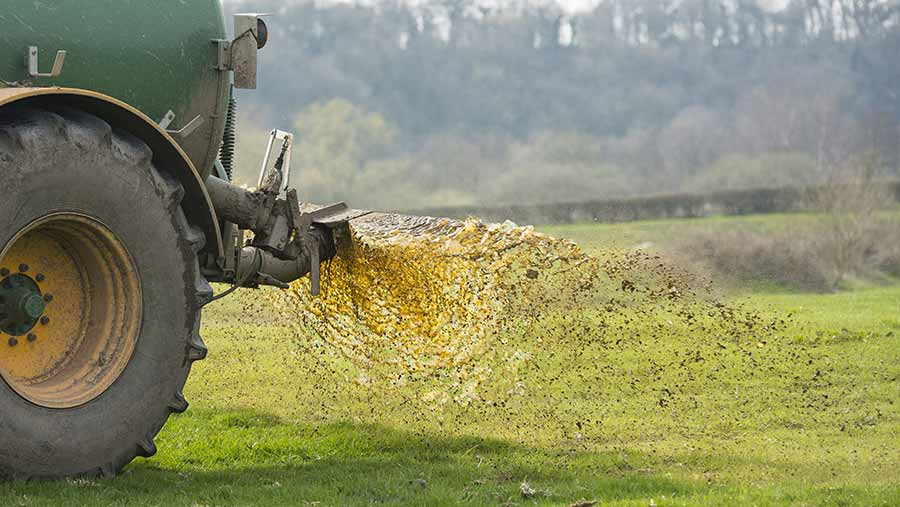 As the NVZ closed period for applying organic manure draws to a close (on 31 January), dairy farmers are being urged to check their samples before spreading.

This will ensure crops are provided with the correct level of fertiliser, after a study revealed a wide variation in slurry nutrient content.

More than 1,500 slurry samples taken between 2006 and 2015 found dairy slurry was not delivering the balance of nutrients expected, when compared to recommended figures in Defra’s RB209 fertiliser manual.

How to sample your slurry and solid manure

Giles Dadd, technical director for SlurryWise, which conducted the study along with Lancrop Laboratories, says slurry nutrient content varies widely, mainly through water dilution, which will be a big problem for many producers after unprecedented levels of rain.

“This can be because of large areas of unroofed concrete or gutter water going into the tank or lagoon,” says Mr Dadd.

Variations in diet – especially the ratio of grass or forage to concentrates – can also affect nutrient concentration.

“Forages will have a low phosphate/high potash content, whereas cereal-based concentrates are higher in phosphate than potash,” he says.

Mr Dadd believes higher levels of slurry nitrogen may be caused by feeding types of proteins the cow does not need or use. Whereas high phosphate levels in slurry could originate from overfeeding phosphate minerals unnecessarily.

And the opposite is believed to be true for those slurries that are below levels given in the RB209 guide.

Results from the study found:

This lack of information on slurry nutrient content can lead to incorrect fertilisation of crops, especially if the soil has not been analysed for its contribution to the nutrients available, Mr Dadd warns.

“Our advice is to find out exactly what is in your slurry and calculate how much the soil will contribute and thus how much bagged fertiliser is needed to produce the crop.”