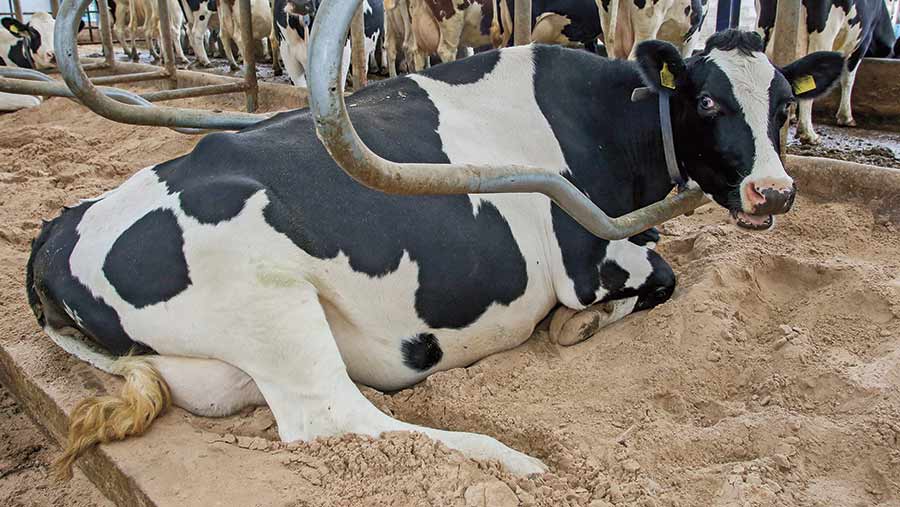 Fatty liver and ketosis are metabolic diseases that can affect dairy cows in late and early lactation. They can cause poor fertility and drops in milk yield.

Good management of dry cows is key to prevent both diseases.

John Fishwick, junior vice-president at the British veterinary Association (BVA), explains this should entail a good feeding during the transition phase as well as body condition scoring to ensure cows aren’t too fat at calving.

It is a metabolic disease that normally occurs in dairy cows in the days and weeks immediately after calving in early lactation.

Ketones are chemicals that are produced when cows lose weight as a result of fat breakdown. Where there is excessive or rapid weight loss, ketone levels in the blood may reach a level where the cow feels unwell, there is a reduction of milk yield and feed intake. This is clinical ketosis.

A high-yielding dairy cow is normally unable to eat enough food in the weeks after calving to make up for all the energy needs of her high milk yield.

So some breakdown of fat and loss of body condition in early lactation is almost unavoidable and we often see a slight or moderate increase in blood ketone levels at the same time. This is referred to as subclinical ketosis.

However, in a well-managed herd, this weight loss and the resulting rise in blood ketone levels should be minimal. Mild increases in ketone levels, as seen in subclinical ketosis, may cause quite subtle problems, which can be quite significant – reducing milk yield and lowering fertility, for example.

What is fatty liver?

Fatty liver disease occurs around late lactation, calving and in early lactation. This is normally only seen in dairy cows and is often closely linked to ketosis.

As part of the normal processes around calving there is a small amount of weight loss and fat stores are broken down. The fat is then carried in the blood to the liver, where it is processed.

If there is a large amount of fat broken down, this can cause a large accumulation of fat in the liver.

The liver plays many important roles and when there is a large amount of fat deposited around calving time it can cause problems with the cow’s metabolism and immune systems. As with ketosis, we may see problems with milk yield and poor fertility.

What are the symptoms of fatty liver?

In very severe cases of fat deposition in the liver there may be 80% or 90% of the liver fully occupied with fat and this effectively causes liver failure. This is called fat cow syndrome, which is a very severe form of fatty liver disease.

In these cases cows may go down and have severe uterine infections (metritis), mastitis, loss of yield and be unable to eat. In many cases they will never recover.

How can you prevent fatty liver and ketosis?

The key to preventing ketosis and fatty liver disease is excellent management of cows and their feeding in the late dry period and early lactation.

Ideally this would entail a smooth transition with no sudden changes in management or feeding over this period.

Good feeding over the transition period requires expert advice and careful management. Although milking cows are of course fed differently to dry cows, the changes should be gradual and where possible, the types of food fed should be largely the same, although quantities and the minerals used may change.

It is also very important not to have cows too fat at the point of calving, otherwise this will encourage fatty liver disease and ketosis.

It can be very helpful to monitor weight loss and blood levels of ketosis in freshly calved dairy cows. One option is to take blood samples from a representative group of freshly calved cows to monitor their ketone levels.

Milk-based tests to measure ketones are also available. If the results show significant increases then it can alert you to the fact that feeding and management changes should be considered. Monitoring body condition scores is also very important.

One suggestion is to measure the body condition score of a group of dry cows and compare this with that in a group of cows calved about two weeks. A drop of half a condition score point or more in those two weeks suggests there is excessive weight loss and action needs to be taken.

Ketones can often be used to monitor the effectiveness of the diet as discussed above, but in more severe cases, ketones reach much higher levels and can cause clinical ketosis, making the cow unwell.

In these cases the cow may recover with simple treatment over time, although there is likely to be significant knock-on effects in terms of production.

However, if rapid improvement is not seen, the clinical ketosis may be due to another underlying cause. A common example is a displaced abomasum (also known as a twisted stomach), so it is very important to get these cows investigated before they deteriorate further.