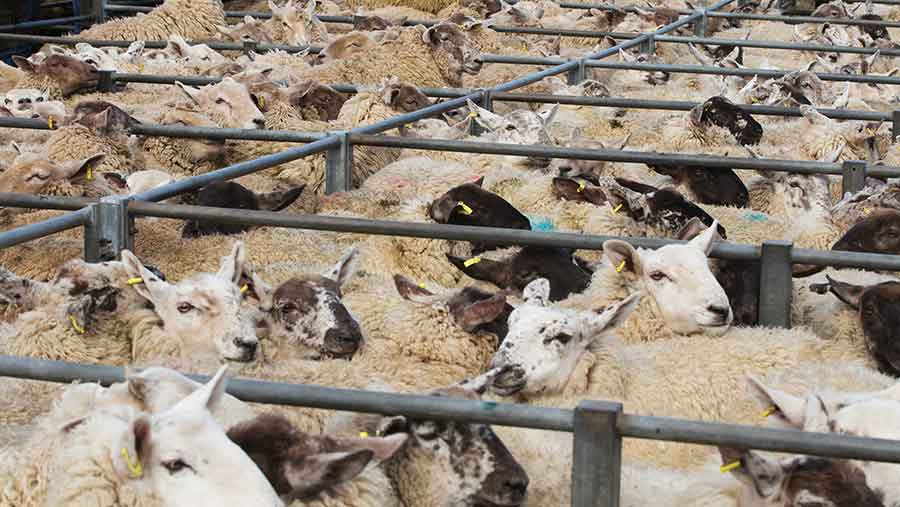 Ensuring every prime lamb leaving your farm makes £90 or more is a tough target, but it is one being comfortably achieved by one Cumbrian farmer this year.

Steadman Dodd is running a system that uses less feed and he is even stocking ewes more heavily. But week on week, from June and well into the autumn, he tops the trade at Kirkby Stephen market.

When the market’s average prime lamb price hovers around 160p/kg, his prime lambs are hitting 230p/kg.

The 800-ewe flock at West View Farm, Temple Sowerby, near Penrith, which Mr Dodd runs with his wife Judy, is now based on Beltex and Texel-crosses, with a high proportion of the ewes now almost pure Beltex, but run commercially.

Apart from one Rouge de L’Ouest tup, the Dodds run a team of Beltex rams to ensure a double dose of the breed’s carcass quality.

“We soon realised we could stock this type of ewe more heavily because they are smaller and we needed to buy a lot less concentrate feed. They just don’t need it.

“But even though they are smaller than mainstream commercial ewes, their lambs still make the weight and consistently sell for a premium,” says Mr Dodd.

Many ewes are lasting for up to six crops and the replacement policy relies on retaining home-bred gimmers, supplemented with about 100 Texel-cross – or even pure Texel – gimmers each autumn.

This season’s high market prices for Texel-type gimmers has meant more home-bred gimmers – more than 200 – are being retained.

All home-bred ewe lambs are tupped; this year all the prime lambs sold out of hoggs have averaged an impressive £104.50 a head.

“I don’t want a big, leggy ewe, but one that’s fairly near to the ground and with as much back end as I can find.

“We have three-quarter and even seven-eighths females in the flock and we’re finding it’s our home-bred sheep that are producing our best prime lambs,” says Mr Dodd, who has also been selling cull ewes at up to £120 a head this year.

Tup buying is an important part of this system: “I want thick, square tups with good tops on them. I don’t mind if they are a bit wide in the shoulder; if you get a good front I always reckon you get a good backend as well, but even though we’re dealing with all this shape, we don’t have to pull too many lambs out at lambing time.

“I want tups that have plenty of meat right down to the hocks and with really full gigots that meet. And I want tups with good legs, not with hind legs so far underneath they can’t tup a ewe easily.”

Tups are certainly paying their way in this flock. Two have been turned out with ewes this autumn for their fifth season.

This year’s first draw of prime lambs was made in early June, with 12-week-old lambs weighing 40kg – and some were twin-born.

“We’ve only missed selling at two Tuesday sales at Kirkby Stephen between June and October. Two of the best lambs were a pair off the same home-bred ewe that weighed 35kg and made £125 apiece.”

Tups used have good legs and plenty of meat down to the hock.

Lambs are monitored closely to ensure they are drawn at the right weight and carrying the correct amount of finish.

“We have a grazing system that enables us to draw from different groups as they come ready, but we handle every lamb – it’s not just about weight. Even a lamb at the right weight that doesn’t handle as we want it to won’t go that week.

“Our regular buyer wants them at 38-39kg and he’s just told us that every lamb he’s bought off us this year has killed out at more than 52%.”

In early October at Kirkby Stephen market, the Dodds averaged 229p/kg for 53 lambs weighing an average of 40kg. “I don’t like getting less than £90 for a lamb. Most of our lambs are making £96-97 a head.”

Late August saw the remaining lambs weaned and the ewes put on a regime to get them “slimmed down”, ready for tups that were turned out on 5 October.

“We keep the ewes tight for a month and then turn out teaser tups for 17-21 days,” says Mr Dodd. “Ewes go on to better pasture for tupping and we run one tup to 40 females. This year we had 200 ewes tupped out of 800 in the first two days.”

Tups stay out until 1 December. After scanning, the ewes are split, with those carrying triplets – about 100 ewes – allowed to run with the earliest lambing group. The entire flock is then strip-grazed on swedes and stubble turnips and fed some hay or silage until lambing time.

Any sheep not in-lamb when the flock is scanned in early January are turned back to the tups for four weeks. Any not in-lamb after a second tupping are culled, but the remainder produce a June-born lamb crop.

Twin- and triplet-bearing ewes are offered feed blocks from early February before coming inside about a week before lambing starts during the first week in March.

“We feed haylage or hay at lambing time; singles may only get hay. You can be quite hard on these sheep, you certainly don’t want them blooming at lambing time,” he says.

Ewes and lambs are turned out within 24 hours of lambing. “The lambs are sharp and up and sucking – they’ve got good jackets to stand some weather and the ewes have plenty of milk.

“This spring there wasn’t much grass when we turned them out, but we fed no cake, just fodder beet, and they thrived. But you’ve got to shepherd them twice a day – this type of ewe can get cast.”

Mr Dodd doses lambs in mid-May with a wormer and mineral/vitamin drench and they aren’t treated again until mid-August – but by then half the prime lambs will have been sold.

“We’re constantly moving sheep around every three or four days to keep fresh grass in front of them and that keeps the worm burden under control.”