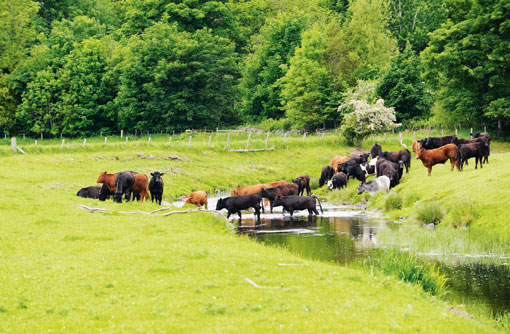 Nitrate vulnerable zones (NVZ) are areas designated by the government as being at risk from agricultural nitrate pollution. If your farm is in an NVZ, you must comply with certain rules or risk being fined.

You must also comply with NVZ rules to be eligible to receive a full subsidy payment under the governments Single Payment Scheme and other direct payments, such as Environmental Stewardship schemes.

What do they aim to achieve?

NVZs exist to help Britain comply with the EU Nitrates Directive, which was voted into legislation in 1991 to protect freshwater from nitrogen pollution.

Nitrate pollution causes a process called eutrophication that extracts oxygen from water leaving barren, anaerobic conditions in which only algae can thrive.

Agriculture is a “diffuse” source of nitrate pollution, which refers to the cumulative, day-­to-­day transfer of nitrates into watercourses. The industry is estimated to account for up to 70% of such pollution in surface water more in groundwater.

What do they mean for farms?

If your farm is in an NVZ, there are a series of rules you must comply with if they apply to your farming practices. These include planning the use of livestock manure and fertilisers to ensure you don’t apply more nitrogen than your crops require; producing a risk map for land where you intend to spread organic manure; and maintaining nitrogen application records.

“Farmers don’t like having rules imposed on them, but most of what’s in the legislation would be good farming practice regardless,” says Nigel Crane, Environment Agency senior advisor in environment and business.

“But these rules make sure you don’t overload the land, so it’s a worthwhile measure, even if farmers don’t like it,” he adds.

Have NVZs achieved their aim?

While there has been a decrease in nitrates in water levels since the rules were introduced in 1996, much of the reduction has been achieved by changes in agricultural practice.

A fall in livestock numbers and a reduction in inorganic fertiliser use, owing to rising costs and better understanding of their application, will have had the biggest effect, although the NVZ rules will have helped play some part, Mr Crane insists.

“It hasn’t been a big reduction, more a gradual but certain decline in certain catchments because of pockets of farmers changing the way they farm, which has an impact when you look at things on a wider scales. That is why farmers need to keep vigilant, as individual farmers within individual catchments can have an important impact on nitrate levels,” Mr Crane maintains.

The Environment Agency has published illustrative maps of the NVZs in England on its website, but these will not be finalised until DEFRA factors in the results of any outstanding appeals, he says.

“However, the majority of farmers will know whether they are in an NVZ or not because the areas of uncertainty are very small,” Mr Crane explains. “Those farmers in those few areas should be aware of the uncertainty and our field officers will also be made aware so farmers are not unfairly penalised.”

How much land is tied up?

Presently, 62% of England is in NVZs, but that figure will be reduced after the latest review, Mr Crane says. “There has been some farmland brought into NVZs and some taken out following appeals, but overall there is a net deduction.

“We can’t be specific at the moment, but we think the amount of land in NVZs will fall to 58%.”

Will more land be drawn-in?

There are no expectations that the amount of land in the zones will increase following the next review in four year’s time, Mr Crane says.

In some catchment areas, the amount of land classified as an NVZ could even decrease.

“There has been gradual improvement in the water quality in a lot of areas and, if that improvement should continue, it might be logical to assume more land could come out.” But other things could happen in the meantime, he warns.

“We are seeing important changes to the climate and there could be changes to agricultural practices which might improve or adversely affect things.

“It is also subject to government policy. While there are no proposals to do this, the government could decide to introduce rules to target the application of phosphates as well as nitrates in areas of concern. We can’t say for sure what will happen.”

Read past articles on NVZs