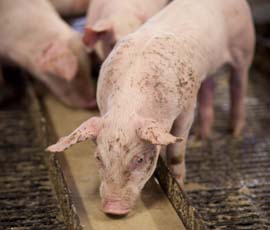 Serious concerns have been raised by the RSPCA at alleged animal welfare abuses on a second Norfolk pig farm.

It is to hold an urgent meeting with the East Anglian Pig Company after undercover footage appeared to show pigs being beaten, badly handled and inhumanely killed.

It is the second expose within the past three months by the pressure group Animal Equality. The farmer in the first incident was found dead three days later.

The RSPCA issued a statement after stills from the latest footage featured in the Sunday Mirror yesterday (22 April).

An RSPCA farm animal welfare officer visited the Norfolk farm as soon as the society was made aware of it early last Thursday (19 April), it said. Another farm was visited on Friday (20 April).

“The footage was viewed by both the farm animal welfare officer and members of our farm animal science team,” said an RSPCA spokeswoman.

“It raised a number of concerns, including poor handling of sows and younger pigs, inappropriate methods of culling and poor implementation of culling practices.”

Pigs were killed using methods not in line with Pig Veterinary Society guidelines.

“We believe that some of the sick pigs shown in the footage should also have been culled and there was evidence of poor practice when trying to remove an abscess from a sow.”

The RSPCA also expressed concern that a sick sow appeared to be left in an open area with twine tied around the jaw, but with no evidence that immediate culling was about to take place.

“This clearly requires further investigation of the circumstances.”

An urgent meeting planned with the management of the East Anglian Pig Company would see the RSPCA set out its requirements for immediate changes on the farms.

“This includes the use of appropriate equipment when handling and culling pigs, together with effective training for staff in these crucial aspects of animal welfare.”

The company will also be expected to implement a plan showing how on-going assessment of adherence to and effectiveness of these measures will be undertaken.

The RSPCA said it would be undertaking unannounced regular meetings at the farms and with the company to ensure these are implemented.

But it also condemned Animal Equality for waiting four more than four months before making the footage available or reporting the alleged welfare breaches.

“We must stress that this footage has only now been made available to us via the media, despite being taken more than four months ago by Animal Equality.

This concerns us greatly.

“It is vital that if anybody or any organisation has concerns about animal welfare that they inform the RSPCA immediately, otherwise they could potentially be allowing continued suffering.”

The farm is a member of the Red Tractor assurance scheme, which guarantees higher animal welfare standards.

Assured Food Standards, the organisation that oversees the initiative, said the Red Tractor scheme did not tolerate any animal mistreatment.

In a statement, it added: “Any contravention of our standards can result in the immediate suspension from the Red Tractor scheme.”

The assurance scheme has already reviewed its systems since a similar incident two months ago.

“It is entirely inappropriate that we should learn about welfare concerns months after the alleged events took place,” said the statement.

“If anyone has any concerns they should always inform an appropriate authority immediately. Failure to do so has the potential to be a serious breach of animal welfare.”

Undercover footage from the farms can be viewed here (viewer discretion advised).