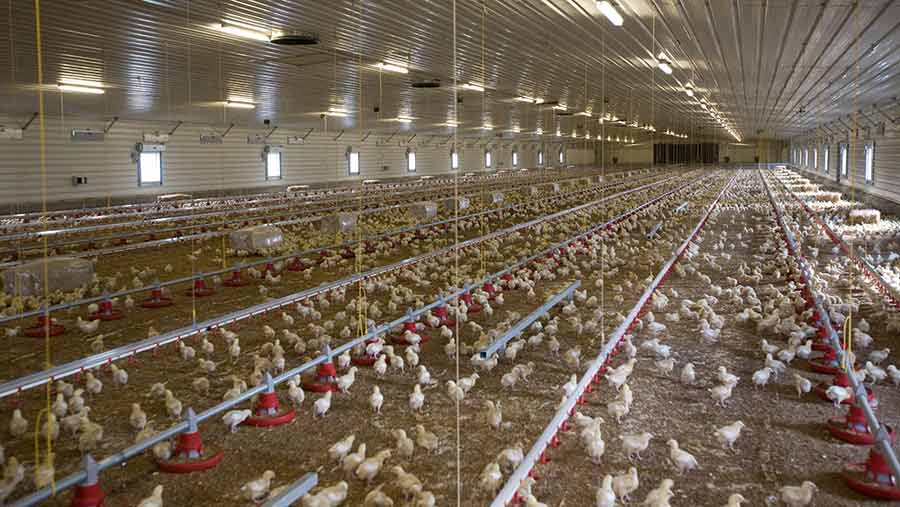 Understanding the interplay between bird health, gut bacteria and antibiotics makes it clear reducing their use where possible is in everyone’s interest.

Every gramme of feed a bird eats and every drop of water it drinks has at least a million bacteria on its surface. Each mouthful influences the huge colony of bacteria, known as the microbiome, that reside in the gut of humans and animals.

We are also covered in innumerable bacteria, all interacting with one another and influencing a huge range of biological functions throughout the body.

The number of bacterial cells on our bodies exceeds our own cells by 10 to one.

In fact, if an alien came down to Earth and scanned us for signs of life, it would likely conclude a human is a community of small organisms working in a symbiotic relationship.

It’s the same with poultry, and it is when things go wrong with this incredibly complex partnership that problems arise.

Antibiotics, introduced to farming in the 1950s, were first thought to be a miracle catch all cure – both preventing disease and improving bird performance.

Their mechanism, in simple terms, wipes out bacteria in the gastrointestinal tract to alleviate illness. However, along with the bad bacteria, it eliminates the good.

The result, according to Richard Jackson of St David’s Poultry Team, is that sickness can be cured, but side-effects will often mean poor litter quality – something he set out to address.

“As a practice we started looking at antibiotic reduction 10 years ago, and now more than 40% of medicines we use to treat infections are not antibiotics,” he says.

“There will always be situations where we have to treat with antibiotics, but in this country there hasn’t been enough time spent looking at alternative approaches. A lot of vets simply aren’t trained to use complementary options.”

His practice now regularly considers the use of pro and prebiotics, essential oils and other alternative strategies to support bird health. Renewed focus on water quality is also thought to have helped.

So antimicrobial reduction should not just be a result of pressure from retailers, regulators of otherwise; finding alternatives has the potential to curtail harmful side-effects.

The challenge is in finding what works. The market is littered with oils, probiotics and other potions that claim efficacy in preventing or alleviating disease.

“There is always some level of intestinal inflammation in the guts of poultry,” says Richard Ducatelle, of Ghent Univesity, Belguim. He suggests science is gradually beginning to understand the microbiome, and preventing illness by maintaining a healthy balance of bacteria appears to be the best tactic.

Animal health is shifting from simply destroying microbes to cultivating beneficial ones, he suggests. “To me, this is the future of the veterinary profession. However, vets need to sit down and talk to nutritionists to produce the right diet.”

For Stephen Collett, a clinician at the University of Georgia’s poultry team, it is about ensuring the efficient transfer of poultry feed to its ultimate product: protein for human consumption.

Mr Collett suggests the best way to do this is ensuring the guts of birds are in as good a shape for growth as possible, as soon as possible.

His Seed, Feed and Weed concept is a well-known expression of this: seed the gut with the right bacteria, ensure it has the feed required to grow in balance and weed any components of the gut that may cause illness or hinder performance.

The seeding should start with the parent flock, he says, where in nature a developed bacterial community is transferred from mother to offspring.

“The poultry industry is great at creating a problem to solve a problem.” By separating hatching with laying fertile eggs, this process cannot happen as effectively.

Also important is broiler breeder diets. They have to have feed limited to balance their own growth rates with the need to lay hatching eggs.

This is obtained by meal feeding, explains Mr Collett, where a ration with lots of mass but less nutritional value is fed, leading to a lot of indigestible matter passing to the hind gut of birds, where less favourable bacteria often reside.

They thrive on this undigested content, which is reflected in the often plain, watery and foam-like litter found in broiler breeder houses.

Why is this relevant? The bacterial environment of a parent transfers to its offspring. “Mother Nature seems to be one step ahead of us,” says Mr Collett.

While a modern hatchery needs to be a sterile environment, and bacterial testing will show this to be the case before hatch, replicating these tests post-hatch will reveal an abundance of bacteria in setting trays.

“That thing we assumed was sterile already has an evolving microflora,” says Mr Collett. “The difference between a clean and a dirty egg is not that different – it comes out of the same hole.”

There is, then, a ready opportunity to perhaps look at breeder diets with a view to boosting gut development of their progeny. Or to bear this in mind when considering starter diets’ pro- or prebacterial composition.

Another sterile environment is the clean shed in which birds are placed. Flocks with continual health challenges requiring antibiotics can inadvertently create an environment where pathogenic bacteria are in overpopulation.

Mr Collett explains that a bird undergoing antibacterial treatment maintains good nutrient absorption in the upper gastrointestinal tract, but the drugs will disrupt the lower gut, causing the shedding of the harmful bacteria and, usually, wet faeces.

Wet litter produces problems of its own, while increased pathogens in any environment will increase the propensity for future flocks to face health challenges.

While antibiotics are an important tool to treat illness, it’s clear their reduction in farming is in the interest of bird health and farmers’ bottom lines.

In-feed medications maintain the upper gut, but disrupt the balance of the lower gut, meaning bird performance may not be noticeably affected, but faeces will increasingly become toxic.

Added protein is very hazardous to birds in the lower performance quartile as it stimulates the growth of bad bacteria in the lower gut.

The microflora of a broiler breeder affects its progeny. Separating hatching from laying and a chick’s first few days affects the development of a bird’s bacterial population.

Mechanism of an infection

When considering how antimicrobials work, it’s important to remember that poultry ferment indigestible food in the lower part of the gastrointestinal tract, says Stephen Collett.

Unlike in ruminants, in poultry nutrients that are easily digested are absorbed in the upper parts of the digestive system, and more difficult parts of food – such as non-starch polysaccharides – continue to the caeca to be processed.

There, those indigestible components of the diet will continue to be broken down, before a process called reverse peristalsis forces these nutrients, once made available by digestion, back into the gut.

“The small intestine is incredibly short, “Mr Collett explains. “It’s an adaption to lighten birds so they can fly. But it is what determines the efficacy of feed conversion and growth.”

How the surface area of the small intestine develops, specifically its surface area, will impact on bird performance. It’s here where the microbiota becomes important.

“The lower tract is where organisms that deal with the non-digestible diet reside. Colonisation of the gut is very important, and we alter that population very significantly with what feed we supply to organisms.”

If the balance of bacteria fails, then harmful organisms such as Clostridia perfingens can become dominant. They feed on nutrients left in the lower tract, begin secreting toxins in ever-higher concentrations and reverse peristalsis fires these back to the upper tract, damaging the gut lining.

A damaged gut means more digestible nutrition feeding this colony of harmful bacteria in the gut, compounding the problem.

Amazing things being done with bacteria

Away from the poultry industry, there are amazing trial results being garnered from experiments with bacteria. Colin Hill, of the Microbiome Institute at University College, Cork, outlines a few.

Faecal transplants – Taking stool from a healthy person and transplanting it into it to a patient suffering from Clostridium difficile-associated diarrhoea, have proved remarkably effective in curing a disease that is often fatal. “The results were spectacular. People who were at death’s door got up and walked out of the hospital within 16 hours.”

An enquiry into finding probiotics that may help prevent salmonella in pigs saw 10,000 bacterial strains taken from infected animals and whittled down to five species that it was thought fought off infection. These five were administered to young pigs, before infecting the herd with a massive dose of salmonella. The control animals got sick, the pigs given the probiotic did not.

Experiments into preventing mastitis in which cows ready to be culled were diverted to Dr Hill’s research centre. A probiotic was administered to teats, and the results were so dramatic that the cows returned to the farm, rather than continuing to the slaughterhouse.

This report is based on the recent St David’s Poultry Team antibiotics conference.