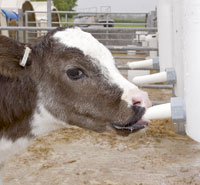 DEFRA has reassured farmers there is no risk of introducing EBL (Enzootic Bovine Leukosis) into their herds via artificial colostrum.

A spokesman said that even when EBL antibodies were identified in milk replacer, there was no risk of infection.

“Imported pre-packaged colostrum is spray-dried and heat treated to inactivate the virus. Antibodies are not the virus itself, so identifying EBL antibodies in artificial colostrum does not mean there is a chance of infection.”

There have been no cases of EBL in the UK since 1996 and since 1999, the UK has been classified as officially EBL-free by the European Union.

New EU regulation, will ensure all colostrums must be imported from EBL-free sources. When these come into force they will ensure farmers will be able to feed calves without the risk of them testing positive in surveillance blood tests.