Body condition scoring is often seen as a tick box exercise, but a new automated camera from DeLeVal aims to remove the hassle factor.

Body condition score loss post-calving has driven one Scottish dairy farmer to install an infrared camera to track any deterioration.

Aly Balsom finds out how it works and what benefits it has brought one Scottish dairy farmer.

Dumfries and Galloway farmer Grant Smith believes that if you get body condition right, you’ll make gains when it comes to fertility and overall farm efficiencies. 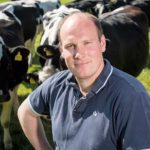 “I think if cows are in optimum body condition, it basically leads to less days open and improved conception and pregnancy rates, which leads to a better calving interval and more profit,” he says.

Mr Smith has long recognised the importance of body condition scoring (BCS) and undertook monthly scoring by eye for the past five years, even before it was enforced as part of his Co-op milk contract.

He believes this, combined with improving cow environment and working with the vet and nutritionist, has been one of the main reasons for herd fertility improvements in the past few years.

However, with higher-than-desirable levels of overconditioned cows at drying off and about 25% losing three-quarters of a condition score between calving and 60 days post calving – versus a target of no more than half a condition score – Mr Smith decided to introduce DeLaval’s automated body condition scoring.

He also thought it would aid management as the farm undergoes expansion from 200 to 300 Holsteins.

“I thought it would be a really good, accurate and fast way to keep on top of BCS, especially on freshly calved cows,” says Mr Smith, who farms in partnership with his parents Muir and Lorna.

Although metabolic issues have never been a significant problem at Kelton Hill, Castle Douglas, the fact fatter cows are more prone to greater condition loss around calving and more likely to develop costly metabolic issues makes close management a priority.

The herd is split into high- and low-yielding groups, with the highs rationed for Mn+35 litres (maintenance plus), including 2kg in the parlour.

However, with production varying from 30-50 litres within the group and including heifers, Mr Smith says automated BCS could help cut feeding earlier.

“We could possibly cut down the cake in the parlour quicker for some higher-condition cows.

“It [automated BCS] allows more accuracy in feeding and cost savings. And vice versa. If you need to feed more, you can give more feed quicker, so you don’t lose condition as quickly.”

By flagging up any dramatic losses in BCS around calving, the system also enables health issues to be picked up and addressed promptly.

“Although a drop in BCS is expected from 0-50 days in milk, a graphical display shows if losses are greater than expected. This information can then be used to make management decisions.

“I’ve had a few cows that are possibly 30 days in milk, no heat and losing condition, so I have tested for ketosis using a cow side blood test.

“It’s never picked up an issue, but if it did, I would speak to the vet, drench the cow with propylene glycol and give her an extra 0.5-1kg in the parlour,” adds Mr Smith.

Speaking at the end of May, Mr Smith admits it is early days to establish the full potential of the system, as the herd usually has a three-month calving break from the end of April.

However, with the herd moving to year-round calving and a batch of bought-in heifers due to calve soon and the main herd calving from July, he hopes the system will enable better control of BCS.

So far he has been impressed with the accuracy and ease of understanding of the system.

He says: “Farming seems to be getting more difficult all the time, so something that makes it easier is always handy. Every open day also costs you money, so if you can keep optimum body condition, you can get cows to calve quicker and it will pay for itself in no time.”

Ongoing research is looking at the potential to develop an automated body condition and mobility scoring system.

With funding from Innovate UK, Kingshay is carrying out the “HowsMyCow” project in conjunction the Centre for Machine Vision at the University of the West of England.

“There are a lot of benefits from condition scoring, specifically in managing late lactation and transition cows. Metabolic issues at calving often occur due to overweight animals. We also wanted to combine mobility with BCS as Jon Huxley’s work (University of Nottingham), shows there’s a strong correlation between lameness and low BCS,” he says.