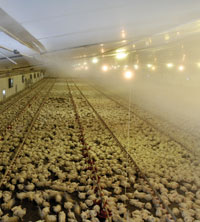 Thoughts of hot summer weather may seem a long away, but a south-west poultry producer has found that his evaporative cooling system is equally useful in winter for replacing humidity taken out by the heating system, particularly during the first two weeks of the crop cycle.

The two poultry houses already utilise the Hydor “Pre-vent” system, but required further cooling to cut the risk of bird mortality. The system operates differently to conventional ventilation systems in as much as houses have no roof extractor fans, instead having 10 impeller fans in the walls down each side of the building.

On the ceiling above each fan, there are four nozzles 1m (3.3ft) apart. Fans drive both air and mist along the roof of the building where it meets the heat generated by the birds. The mist evaporates, thereby reducing the temperature of the air which falls to the level of the birds on the floor. The air pressure within the building forces the cooling air across the floor and out of the low-level louvres on the side walls.

Mr Christensen added: “The cooling capacity of the Hydor system is very good. The reduction in excessive temperature was impressive from the outset. Within five minutes, the temperature had dropped from 30C to 25C.”

“We have vastly improved conditions for the birds in hot weather and are reducing our energy overheads at the same time. We are so pleased with the system, plans are in place to install it in a further two buildings,” said Mr. Christensen.

Energy use by electric fans is reduced because the fans can be run for shorter periods and less frequently because of the lower temperatures created. One possible problem with using water is unwanted dampness and puddles, but this system uses non-drip nozzles.

The cooling can be used in short, 20 second bursts in the winter to replace humidity taken out by heaters, without reducing the temperature, which will improve the quality of the produce, particularly during the first two weeks of the cycle when the houses are heated to high temperatures.