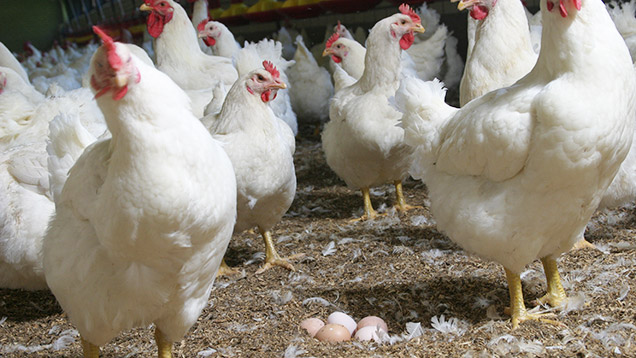 New research looking at controlling campylobacter within a chicken’s digestive system could lead to lower contamination in factories.

Most of the work being done on this high-profile issue is currently focused on the food safety aspects of the poultry production chain, such as on-farm biosecurity and processing line practices. In part, this is because campylobacter is not recognised as a bird health problem.

But, according to Jonathan Broomhead, poultry research manager with US-based Diamond V, it is also possible to reduce campylobacter levels through diet change.
In particular, he points to research into broilers using his company’s microbial fermentation product, Original XPC, distributed in the UK by Rumenco.

The theory is that the pathogen’s main entry route into poultry processing plants is from within the bird’s digestive systems and faecal matter. So, if levels of campylobacter within the intestines can be reduced, so too can the disease load being taken into processing plants.

A recent trial by the SPR group in Georgia, USA, focused on the Cobb breed, with birds assigned one of three feed treatments.

These consisted of a control diet, based on the industry standard (T1), and two research diets (T2 and T3) with additional XPC, but at different levels. The birds and their feed consumption were then regularly weighed in replicated pens of 50 birds, with eight pens a treatment.

At 14 days old, half (25) of each pen of birds were tagged and orally challenged with campylobacter.

At the end of the trial at 42 days, 15 birds a pen (five tagged and 10 not tagged) were sampled and had a section of the digestive tract – their ceca – removed for evaluation of campylobacter colonisation.

Results showed a significant improvement in feed conversion by birds on T2 and T3 diets.

“But the really interesting result was that there was a significant reduction in horizontal transfer of campylobacter from challenged to unchallenged birds,” says Dr Broomhead.

As the table shows, birds fed XPC were better able to resist the environmental challenge of campylobacter. They were exposed to birds that had been orally challenged with campylobacter, but they had less incidence and load of the disease at processing age (42 days).

According to Dr Broomhead, this approach improves the innate and adaptive immune system of birds, while optimising gut health.

“It’s this combined effect which positively impacts the birds’ ability to combat challenges and therefore reduces the prevalence and load of campylobacter within their digestive tract,” he says.

“Over time, as birds are better prepared to fight off intestinal pathogen colonisation, the environmental campylobacter load can be reduced on the farm. This, in turn, can significantly impact the amount of campylobacter entering processing plants.”