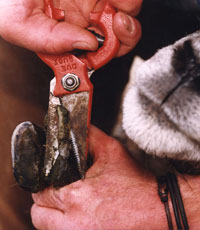 But earlier identification and treatment with appropriate injectibles and sprays would help keep problems at bay.

A wide study of UK flocks highlighted that producers with good on-farm facilities often fared better when tackling lameness. “Routine trimming is not effective,” declared Prof Green. “Foot bathing is good at tackling scald, but only where facilities are good and sheep turned out on to clean pasture.

“A study of farms showed that early treatment with an appropriate injection and long-acting spray cut lameness from 8% to 2% within two to four days. Those who trimmed feet, as a comparison, took over 10 days to see improvements.”

That echoed experiences in Australia, said Prof Green, where trimming was not commonly considered and heritability of lameness traits was being factored into breeding decisions.