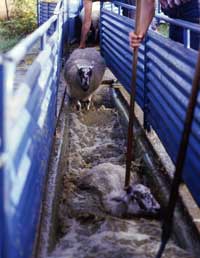 A Devon farmer has been fined more than £4000 for polluting a stream with sheep dip.

Robert Alford of Cardwell Farm, Longcross, pleaded guilty to polluting Chillaton brook, a tributary of the River Lyd, after more than 80 salmon, trout and other aquatic life were found dead in June 2005.

An investigation by the Environment Agency traced the pollution to Mr Alford’s farm, where he had dipped 1700 sheep a week earlier.

While the dipping had been carried out in a farm building, the sheep were kept in an outdoor concrete yard.

A hole in the yard’s wall mean contaminated water could not be contained and entered the farm’s drainage system.

Mr Alford apologised for the contamination, blaming heavy rain for the run-off. He said he had addressed the problem and paid the £308 Environment Agency clean-up bill.