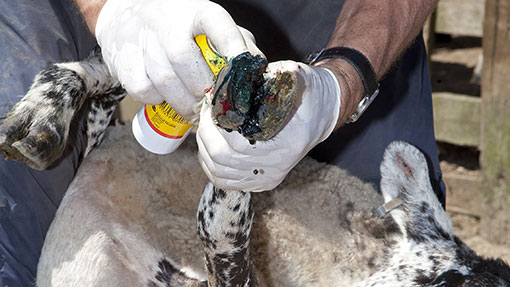 EBLEX is setting up a national network of sheep focus farms as part of a 12-month campaign to address cattle and sheep health and welfare issues.

The initiative, which is the result of AHDB being awarded a number of tenders under the Rural Development Programme for England (RDPE) Skills Framework, will involve a series of events taking place on 19 sheep focus farms around England.

The focus farms are spread right across the country, from Cornwall to Northumberland, and include examples of both lowland and upland farms. The first activity will be a number of summer meetings looking at sheep lameness, specifically focusing on the five-point lameness management plan, which gives producers a clear strategy to reduce lameness in their flock.

The network of focus farms will be delivered by EBLEX in partnership with a number of organisations around England, including Duchy College in the South West, Westpoint Vets in the South East, ADAS in the Midlands and SAC Consulting in the North.

See also: Find out more on this topic by viewing out Stamp Out Lameness campaign

EBLEX north-east regional manager Steve Dunkley said: “Lameness represents an enormous cost to the British sheep industry, with the losses from foot-rot alone estimated to be around £6 a ewe.

“It may not be possible to eradicate lameness entirely, but by implementing the five-point plan, producers have the best chance of minimising costly lameness problems on their farm.”

The first focus farm meetings, in partnership with Duchy College, will be taking place in Callington, Cornwall, on 28 May and Dorchester, Dorset, on 5 June. For more information visit www.eblex.org.uk/events.

In addition to the focus farm activity, there will also be a number of beef health seminars and in-depth cattle and sheep health workshops, enabling producers to look at issues on their farms in more detail. Key areas of focus will include health planning, lameness, infertility and scab in sheep, while BVD, Johne’s, and pneumonia are among the priorities on the beef side.