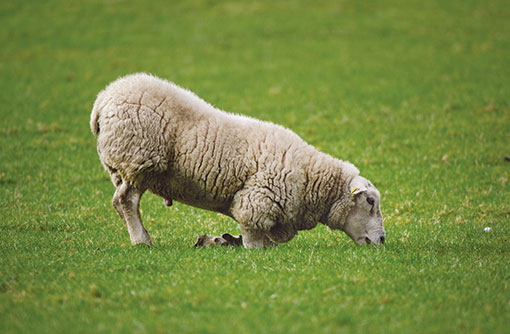 A survey of more than 500 Welsh farmers carried out by the University of Liverpool showed 40% of farmers blamed bought-in stock for introducing CODD to their farm. Farms that had digital dermatitis (DD) in their cattle were also more likely to have the condition in their sheep.

CODD is an infectious disease, commonly mistaken for foot-rot on many farms. The primary difference between it and foot-rot is that CODD infection starts at the coronary band, rather than the inter-digital space, and often causes the whole hoof capsule to shell out.

These survey results suggest the condition affects 35% of sheep flocks, however ongoing work implies UK prevalence could be as high as 50%.

Vet and researcher Joe Angell from the University of Liverpool urges producers to isolate all bought-in sheep for three to four weeks and tip every animal to look for signs of the condition. Failure to address the problem can result in severe and rapid spread that can be difficult to eliminate.

“Sheep are not always lame with the early onset of CODD, so it’s important to tip and treat any infected animals,” he says. “Over the past 10 years farmers have increasingly recognised CODD on their farm. Bringing disease on to your farm is a significant risk.”

To avoid this potential threat, producers should aim to buy stock direct from farm so they can assess sheep and flock history. Rams should also be purchased in advance of the breeding season so there’s time for them to show signs of disease.

Current evidence recommends treating the condition with a long-acting amoxicillin injection and being aware that further treatment may be needed two to three days later. Animals should continue to be isolated until they are free of disease.

The survey also identified flock size as a risk factor, with larger flocks having a higher incidence, probably due to higher stock movements.

Results also showed 65% of farmers believed foot-rot and scald were risk factors for CODD and generally saw it alongside these other disease.

Mr Angell says the fact foot-rot and CODD are able to co-exist can add to diagnosis problems, and because treatment differs it’s important to seek vet advice. However, it is likely that getting on top of foot-rot and scald will help control CODD.

The link between DD and CODD is not yet fully understood, although there are currently two research projects being carried out at the University of Liverpool looking at transmission of both CODD and digital dermatitis.

1. Initially there is hair loss at the coronary band (where the hoof joins the skin of the leg).

2. This then becomes red and sore.

3. The hoof then becomes under-run starting at the top.

4. Finally the whole hoof comes off.

5. Healing may then occur, but the hoof may be deformed. The disease is extremely painful and the leg above the hoof is often hot and swollen and the sheep resents the area being touched. Many sheep will often stand holding the affected foot in the air. Sometimes more than one foot is affected.