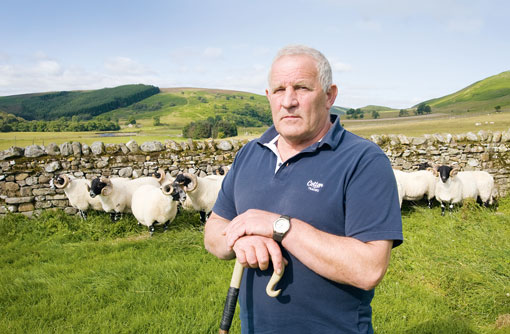 It’s all too easy to retain a chronically infected lame ewe in the vain hope she’ll eventually recover, but by doing so producers could be stopping themselves from ever truly getting on top of lameness.

“If you keep persistently infected (PI) ewes, you will get possible cross-infection, resulting in more and more PI ewes and more time dealing with problems.

“If you can substantially reduce lameness incidence, you can spend more time doing other things rather than chasing sheep. There’s also the welfare implications of lame sheep and the costs associated with reduced productivity.”

PI individuals are a constant source of background infection, explains vet Matt Colston, of Frame, Swift and Partners, who says re-infection rates are stopping most farmers from getting lameness levels down to reasonable levels.

“If lameness can be kept below 2%, producers will be rewarded with less work and more productivity.”

However, Mr Dixon – who was involved with FAI Farms in designing the five- point plan (see chart) – stresses that although culling is important, it is not the most crucial element and should be used as part of a whole approach.

“Culling is a last resort – basically if you want a lameness-free flock and they won’t respond to treatment – you don’t have an option.

“There is a cost to culling, for example, the cost of replacements is usually higher than cull value. It is a question of judgement and how much time you have spent on a ewe.”

However, he also says, although replacement costs are worth considering, the hidden costs from reduced productivity are significant.

“If you can substantially reduce lameness incidence, you can spend more time doing other things rather than chasing sheep. There’s also the welfare implications of lame sheep and the costs associated with reduced productivity.”
Graham Dixon

Mr Colston says there is room for everyone to reduce the “massive” hidden costs from lameness, as well as labour input:

“I don’t know any flock that doesn’t complain about spending too much time doing feet. By managing properly you can get the time spent with lame sheep down to a minimum.”

Mr Colston explains how adopting a “three strikes and you’re out” rule for lame sheep allows sheep the chance to recover, before removing them from the flock (see cull strategy diagram, left).

Culling of chronically infected animals, and adhering to the other points in the five-point plan, has helped Mr Dixon cut lameness by 75% over three years in his flock of 1,200 ewes.

At the start of the programme, 5-10% of the flock were culled for lameness, however this has now dropped to 3%. Such a reduction in culling level over time is a pattern likely to be seen on most farms taking such an approach to lameness.

“When selecting culls, we look for PI ewes, those that do not respond to treatment over a period of time,” says Mr Dixon.

“We may identify lame sheep with spray, but good stockmanship is important so you know your lame ewes. Culling is always a last resort.

“Prompt treatment of infectious lameness is also crucial – as soon as you see a problem it’s important to do something where possible. In a field situation this can be difficult, but you need to assess the extent of the problem.”

Mr Dixon will spot treat problem animals if there are only a couple of infected individuals. However, when 20-25 are lame, for example, he says it is worth gathering them up and running them through the handling system.

He also advises foot-bathing whenever stock are handled where infectious lameness has been identified.

Mr Colston stresses that although handling ewes for targeted treatment and foot-rot vaccination may be challenging for larger flocks, this should not be an excuse for not tackling the problem.

“It’s convincing farmers, and particularly bigger flocks, it is possible to set up their system to enable routine catching and treatment.

“It will often involve a change in mindset, but producers need to ask – what can I do to change my system so I can handle more easily? If lameness is something you want to address, there are options that everyone can do.”

Mr Colston explains that although initially a large number may need to be targeted for treatment, this would drop as lameness incidence was reduced. With a target incidence of less than 2%, this would only equate to 60 ewes from a 3,000 ewe flock, for example.

Online: For more information on the campaign, visit www.fwi.co.uk/stampoutlameness

Events: Lameness will be a topic up for discussion at NSA Sheep 2012 on 4 July. FAI Farms is also hosting two lameness events on 28 June and 11 September. More details can be found on the campaign website.