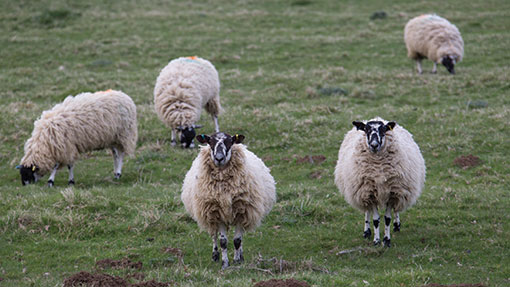 Many UK flocks are underperforming because of disease such as mastitis and lameness. Lameness alone is thought to affect three million sheep at any one time.

The message from Eblex beef and sheep scientist Liz Genever is: “Do not keep ewes with bad feet or lumpy udders.”

Ten percent of the national flock are estimated to be lame, with foot-rot and contagious ovine digital dermatitis (CODD) the main culprits.

Both are highly infectious, therefore, keeping ewes with these conditions increases the risk of them spreading to the rest of the flock.

An ideal opportunity to inspect foot condition is at weaning. Records detailing a ewe’s history of lameness should be examined at the same time. Dr Genever recommends culling ewes after three treatments, possibly two.

Culling is one of the actions recommended in the five-point plan for tackling lameness that Eblex has produced with Farmers Weekly and other industry partners.

Dr Genever advises against routine trimming as this can allow infection to get in.

Lame ewes earmarked for sale should not be mixed with prime lambs because of the risk of disease transmission, but they should be sound before they are marketed. “They need to be fit to travel, so they need to be weight bearing,” says Dr Genever.

Lame ewes often have lower body condition score due to reduced time feeding and more energy expended and this will have an effect on their performance and that of their lambs.

But udder condition, and not lameness, is the most common reason for culling younger ewes. Mastitis, either acute or chronic, therefore, plays a major role in reducing the productivity of ewes and increasing replacement costs.

Studies are currently under way to examine if the presence of lumps in an udder increases a ewe’s risk of developing mastitis. The results will be published next year, says Dr Genever.

“The work is also looking at the impact of lumps on lamb growth rates as it is thought milk yield will be reduced as less udder tissue is working.”

She recommends carefully palpating udders soon after drying off to check for any lumps, and checking udders again before tupping. “These lumps are evidence of infection. In a recent study at Warwick University, lumps ranged in size from a grape to a Bramley apple. It can be very easy to miss small lumps.”

If lambing records point to issues with milkiness, Dr Genever suggests consideration is given to removing these ewes.

James Drummond: Alnwick, Northumberland: One strike and they’re out

A one-strike cull policy is James Drummond’s eventual goal as he strives to improve lameness rates in his mixed flock of Suffolk-cross and Cheviot ewes.

“Culling might have got rid of the problem quicker, but we would have had to cull a large number of ewes.

“We used different treatment methods instead,” says Mr Drummond, who runs a flock of 1,000 ewes and 250 ewe lambs near Alnwick, Northumberland.

Infected animals are treated with the antibiotic tilmicosin and newly purchased rams isolated for a month.

All animals are vaccinated for foot-rot at scanning. “We find once is enough. Vaccination has definitely reduced cases,” Mr Drummond reports.

The lameness protocol includes foot trimming. “If there is a loose hoof we trim and catch it early on with foot-bath solution,” says Mr Drummond. “I also routinely run ewes through a foot-bath containing this treatment.’’

Problem ewes are quarantined from the main flock until lambing. Infected sheep are run in a separate paddock and there is a second set of pens for these animals.

The policy is to cull ewes after three bouts of lameness, but Mr Drummond is planning a stricter approach.

“We have repeat offenders which shows they have poor resistance so I want to get it down to one strike and they’re out. In the long term there is a cost benefit in getting rid of them, even if they are young, because we won’t be keeping breeding females from them.”

Antibiotics are used to treat ewes with mastitis. The flock is handled frequently and udder condition checked.

“Ideally we would cull if there is a problem, but it would depend how she has responded to treatment,” says Mr Drummond.