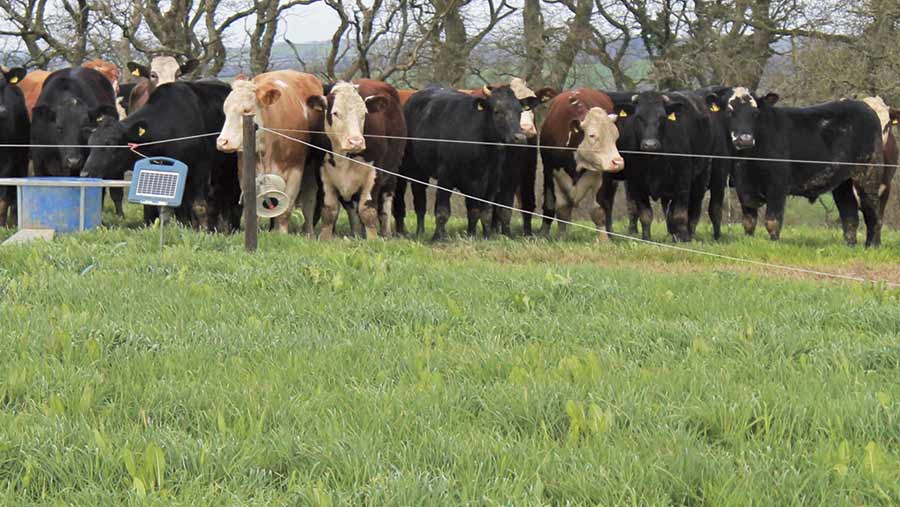 Martin Howard, an organic beef farmer in Cornwall, has witnessed the benefits first-hand and recently won the Farming and Wildlife Advisory Group’s Devon bronze otter award for his long-term commitment to sustainable farming.

A second-generation farmer, Mr Howard has been farming at Lower Northcott Farm, near Launceston, for more than 40 years.

See also: How soil sampling can improve grassland and crops

His organic beef holding in the heart of the Tamar Valley is a hub for wildlife with permanent pasture, woodlands and orchards among some of the features incorporated as part of the farm’s Higher Level Stewardship agreement.

But with Mr Howard’s passion for soil biology, there’s just as much activity going on below the ground as there is above – and it has a beneficial impact well beyond the soil itself.

Soil organic carbon is the main source of energy for these micro-organisms and ensuring this is locked in the soil maximises productivity, which in turn affects livestock performance.

As a self-proclaimed “biology farmer”, Mr Howard initially turned to soils for answers after a bout of health problems within the herd. “We had a lot of issues with [Infectious Bovine Rhinotracheitis] in our calves,” he explains.

“It was very intense, we were jabbing animals constantly – that’s not the way we wanted to farm, so we began to look at our soil health.”

The importance of carbon

Seeking advice from ruminant mineral consultant Peter Bone, Mr Howard began to test his soils, and spent 12 months researching the importance of soil biology and how it could benefit the livestock.

“We linked the health issues with what was happening in the soil, and found we were depleting the carbon,” explains Mr Howard.

This low carbon level led to poor nutrient uptake by the grass, resulting in nutrient deficiencies in the cattle.

“We wanted to be in a position where we were accumulating and holding carbon in our soil to improve the nutrient level and quality of the forage.”

The farm has worked closely with Jennifer Dungait, research scientist at Rothamsted Research.

Dr Dungait is investigating reducing soil carbon loss through organic matter management and has carried out a number of tests on the land at Lower Northcott.

As an advocate of the benefits of longer leys and permanent pasture, Dr Dungait says including these practices on farm has been proven to increase the levels of carbon within soils.

“A well-managed pasture is as good as woodland in terms of how much carbon is in the soil.”

Though the farm initially continued to grow and feed cereals to the cattle, after looking at his margins and the effect on the soil, Mr Howard made the decision last year to switch to a grass-based diet for the herd and put the whole farm into permanent pasture.

“Products from livestock that have been grazed contain higher levels of polyunsaturated fatty acids [such as omega-3], vitamin E and conjugated linoleic acid [omega-6],” he explains.

This analysis considers key mineral levels in the soil and compares them against guidelines for optimum livestock nutrition – highlighting where levels are low and need treatment and where the levels are high and may affect livestock performance.

To treat the soils organically, the farm applies specific minerals to rebalance soil levels as well as using both molasses and milk sludge to boost nutrients.

Over the past four years, many of the pastures have been put into herbal leys, using deep rooting species such as chicory, plantain and clover to improve soil structure and help draw up essential vitamins and minerals from the soil, while locking in essential carbon.

“The further we can get roots to go down, the more productive the crop is.”

Managing compaction is crucial and Mr Howard is aiming for perfect soil structure to maximise the benefits of deep-rooted crops.

“I need oxygen in my soils and where there is compaction it makes the site anaerobic.

“This locks the nutrients into the ground so they aren’t transferred to the grass,” he explains.

“Interestingly, what we have found is that where there is anaerobic activity alcohol is created.

Although Mr Howard previously used conventional tillage methods – mainly to tackle compaction – he is starting to use min-till techniques to establish grassland.

“I want to be heading for a system that solely uses direct drilling practices, as too much is lost in the soil when more invasive methods are used,” he says.

“The benefit of this is the drill can inoculate the seed with microniser, which we have found gets the crop established much quicker.”

Since putting all of these measures in place, the farm has seen vast improvements.

The health issues that sparked the soil studies have been alleviated and Mr Howard now finishes cattle at 24-30 months purely off grass, reducing his fixed and variable costs – although detailed figures have yet to be collated.

Chemical use is only putting a sticking plaster on the problem. Optimising biology can repair it Martin Howard, organic beef farmer

Although finishing rates are arguably slower than a more intensive system, it’s no less productive; and farmers need to look at the whole approach not just livestock production, says Mr Howard.

“It’s important to remember we’re not just feeding the animals, we need to feed the soil too – I treat the soil very much like a separate enterprise,” he explains.

“Over the next 10 years my goal is to create a system that looks after itself. I’d never go back now – this way of doing things makes farming very enjoyable.”

Working with naturally occurring nutrients is something that both conventional and organic farmers can do, cutting expensive chemistry costs, he adds.

“Chemical use is only putting a sticking plaster on the problem. Optimising biology can repair it.”