A dairy farm has slashed its antimicrobial use by nearly 30% through a combination of selective dry cow therapy (SDCT) and improved herd management, putting it in the top 25% of UK herds with least use.

At drying off, Goldsland Farm at Wenvoe, Cardiff, uses antibiotics in less than 20% of the 200-cow Holstein and Dairy Shorthorn herd, opting instead for SDCT.

Farmer Abi Reader says SDCT, which was first implemented eight years ago, is dictated by milk recording data – teat sealant only is used on cows with a somatic cell count (SCC) of less than 200,000 cells/ml. 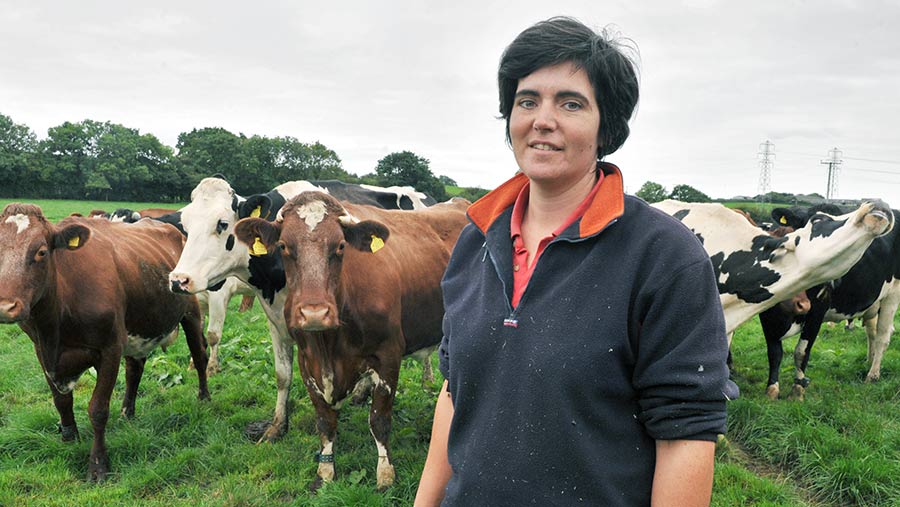 There is also a marked reduction in the level of antibiotics used.

Despite the relatively high average herd SCC of 190,000 cells/ml when SDCT was first used, sealant-only at drying off was fully justified, she says, because mastitis issues were not centered on the dry and fresh cow periods.

Code of practice at Goldsland Farm

“Mastitis issues occur 60-80 days post calving, so are not linked to the dry cow period – cows drying off with a low somatic cell count calve in low,’’ says Ms Reader.

The mastitis challenge, she suggests, has been environmental, including housing issues and a build-up of disease in grazing paddocks during the summer.

Through her work as a Farming Connect Focus Farmer, she has been working to improve cell counts and mastitis.

Issues being addressed are: cow track improvement; reducing poaching around water tanks; and restricting cubicle access during the summer months, when cows at grass come into the sheds for milking and buffer feeding.

Other contributory factors in the reduction in antibiotics use include placing stone in gateways.

This all helps to reduce the probability of germs making contact with cow udders.

Ms Reader’s farm is one of 15 that took part in a Farming Connect project looking at antibiotics use and how it could be lowered.

The project involved monitoring antibiotics use at the farm and benchmarking it against other dairy farms under the guidance of veterinary specialist James Breen, of the University of Nottingham and Quality Milk Management Services (QMMS).

Since taking part in the study, Ms Reader has lowered antibiotics use from 15mg/PCU to 10.89mg/PCU and has cut critically important antimicrobials from 0.3mg/PCU to 0.1mg/PCU in 2016-17 without compromising animal welfare.

The highest use was in treating animals for lameness, but Ms Reader is addressing this by improving foot-bathing facilities and cow tracks.

Reductions were made by drawing up protocols in conjunction with veterinary advice and running tests to ensure the right antibiotic was being used for the problem.

“We also looked more carefully at whether an antibiotic was needed in the first place,’’ Ms Reader explains.

A greater emphasis has also been placed on using pain relief for all conditions, including mastitis, lameness and calf scours.