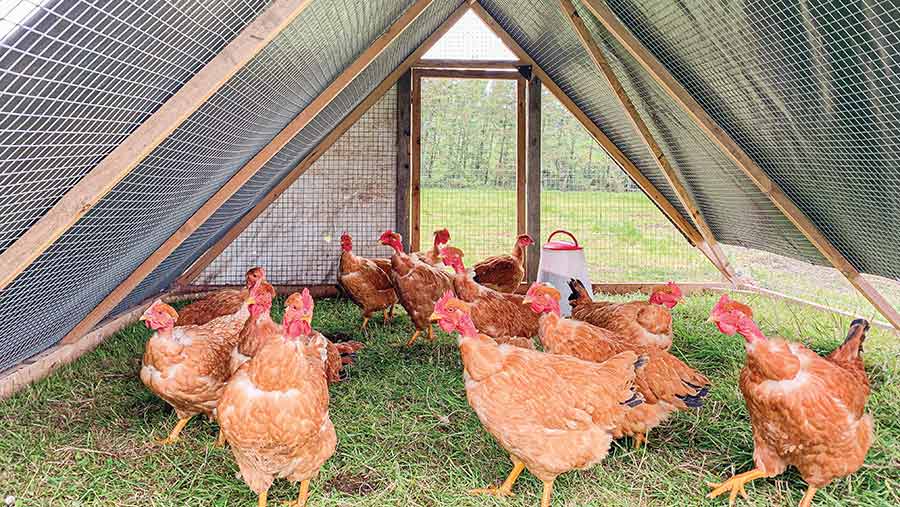 A Devon poultry farmer is achieving as much as £5.50/kg through ethical production – so called because of the additional considerations for the environment and bird welfare.

A high proportion of the diet consumed by Mark Chapple’s flock of 1,600 Hubbard hybrid broilers comes from the land.

Mr Chapple was initially concerned that it would be impossible to produce poultry at Redwoods Farm without soya. 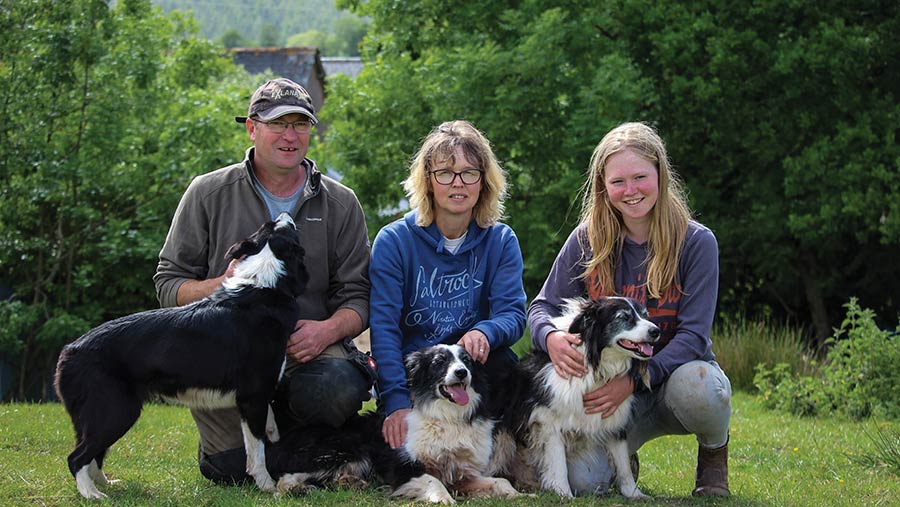 “Soya is seen as one of the best sources of complete protein for animal feed. The lysine in the amino acids is very difficult to replace with a normal production diet,” he says.

However, he worked with a nutritionist to devise a ration and, as the birds get additional protein from foraging insects and other bugs, the feed has proved to be effective.

An avian premix of vitamins and trace elements is supplemented with insects and worms as the birds follow a rotational grazing system behind cattle.

Crucially, the wild insect protein helps to offset the removal of soya from the diet. “I believe this element of the diet is crucial to the flavour, and definitely helps in terms of protein requirements, but the feed ration my supplier has devised is a complete feed in itself.”

Mr Chapple also grows multispecies leys and direct drills oats and barley; he is considering producing insects too. “If we can do that within the rules in this country that would be great, but there are some Defra regulations that restrict the use of insects,” he says.

Breed and age at slaughter

Mr Chapple rears Hubbards because they are good grazers, slow-growing and active.

His most recent crop of broilers were Hubbard S77N Naked Necks, but these proved to be too slow-growing, so he will in future rear the standard Hubbard 57.

“The Naked Neck is the slowest-growing breed of all and this worked well with the flavour. But there was a crucial downside: birds reached sexual maturity before they were ready to be slaughtered.”

The feed conversion efficiency ratio of a bird that finishes at 20 weeks is poorer too. With his next crop of birds he aims to slaughter at a minimum of 10 weeks.

By sourcing larger numbers of birds along with another farmer, Mr Chapple can make savings on the chick price. “We source through someone who is buying many more chicks than us,” he says.

“When you are producing small numbers you need to buy chicks and feed at sensible prices. Trimming 50p off the cost of a chick might not seem much when you apply those figures to other livestock sectors, but it can add up to quite a lot in poultry.”

The chickens are housed in mobile coops in areas covering 3.5x3m and holding about 50 birds each.

These are moved daily to fresh pasture grazed by cattle. It takes roughly two hours a day to move and feed 1,600 birds and do other jobs associated with rearing.

Mr Chapple says the hens trample in the manure, feed on the remaining grass and peck at the roots. They eat the insects, and their own droppings are then added to the soil. 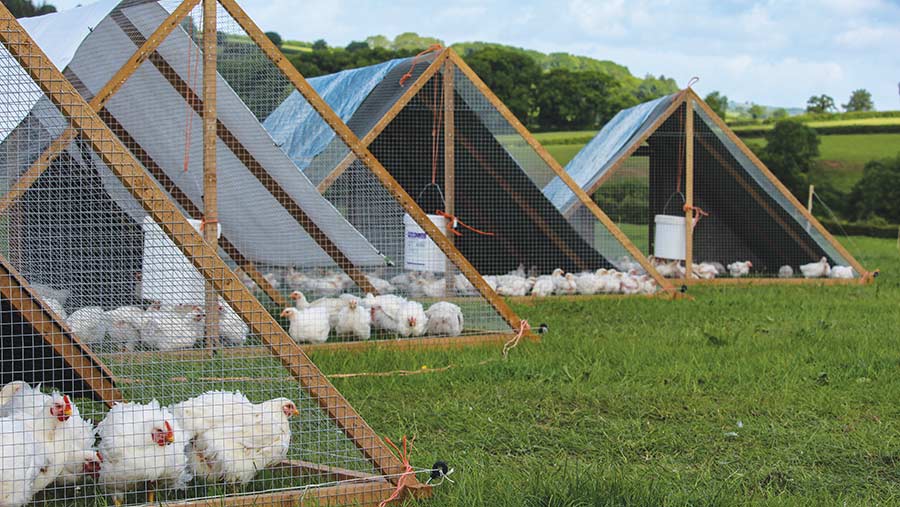 “They will scratch around and pick up bugs from cattle dung pats, so that in itself increases the variation in their diet and it benefits soil structure and biodiversity,” he says.

The ground is rested for 60-90 days after grazing. By moving the chickens on to clean pasture daily, disease risk is low.

“Although the birds are in an enclosed space, they are in a new area every day, so in their lifetime they will cover a bigger area than a free-range chicken.

“Because they are on that area for just one day it gives the soil and the pasture a long rest period between grazing, which is how things work in nature.”

Unlike organic and free-range, “ethical” is not a regulated product description, so it is for producers and retailers to set their own standards and ensure they deliver on these.

“We can’t sell the birds as organic or free-range because they are reared in coops, and the farm is not certified as organic, but our customers understand the criteria we set for producing birds in the way that we do and are willing to pay for that,” says Mr Chapple.

What does ethical production entail?

Unlike the swing towards plant-based diets, he says ethical production embraces the fact that animals are being raised for food. But every point in that process must provide the bird with a life as good as, if not better than, the one it would have achieved in the wild.

“We look at the behaviours exhibited naturally by animals – for poultry that would be pecking for food in the natural environment,” says Mr Burrows. The birds are produced “ethically” because of the work they do in regenerating the soil and the land.

Chickens will follow cows in a rotational grazing system, and this has benefits for soil structure and biodiversity.

Luxury market
The high-input, high-output, high-cost system is not a sustainable model in poultry farming, says Mr Burrows. “I have had producers in intensive systems question how I can justify charging £27 for a chicken: my response is to ask them how they justify charging £4 for one.”

As his is an expensive brand in the luxury market, Mr Burrows is not surprised that half his customers are London-based. But he believes there are good opportunities for new producers to come into a sector that is in its infancy.

“We are seeing sales growth in other regions, largely from people who are feeling disconnected from the food chain.”