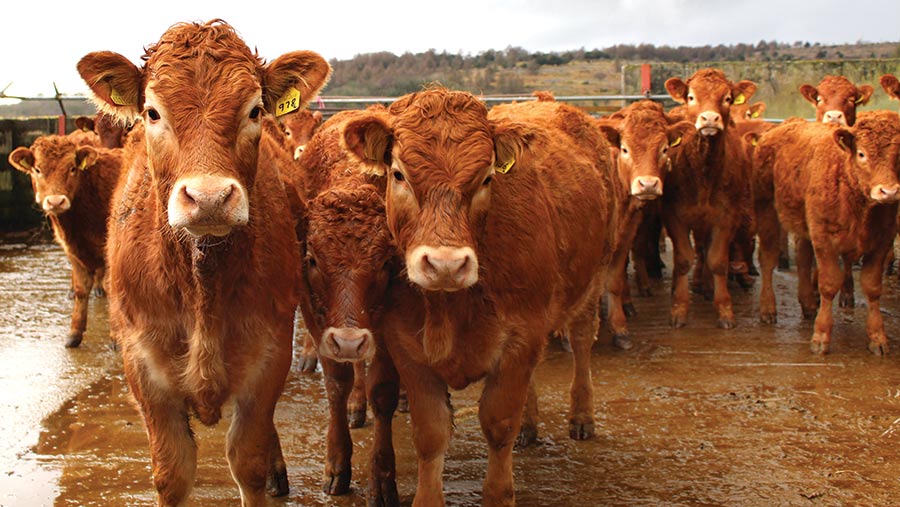 Carrying out a lung wash to identify the cause of respiratory symptoms has enabled one beef farmer to better target antibiotics treatment, and use a specific vaccine to prevent further pneumonia outbreaks.

Ted Chapman, who runs a herd of 60 high-health commercial Limousins at Lane Head Farm in Kendal, Cumbria, had a flare-up of pneumonia in calves early last year.

“My first thought was the vaccine wasn’t doing its job,” admits Mr Chapman. 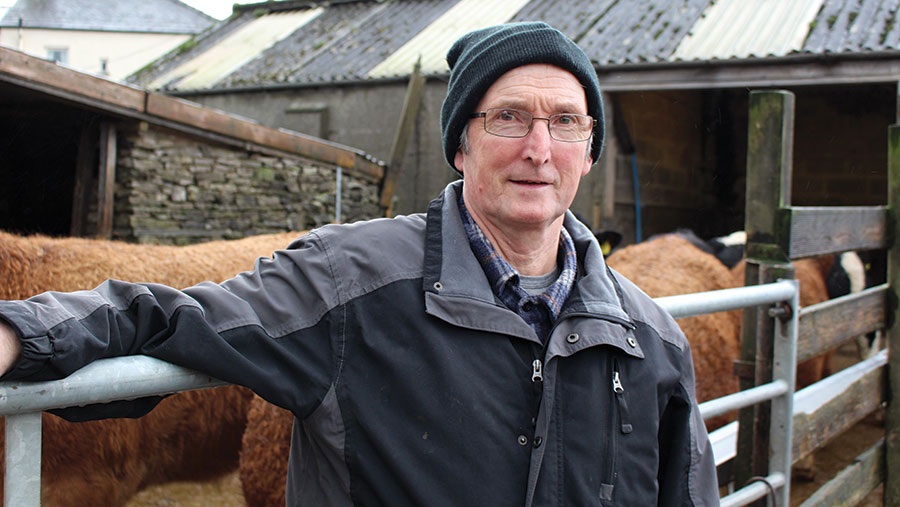 Ted Chapman says the outbreak of pneumonia cost him £1,000

BAL involves a small incision being made over the tracheal ring of an animal showing respiratory symptoms.

It can be done in animals as young as four to five weeks old, through to adult cattle. After a local anaesthetic, a catheter is inserted, and a tube passed down into the lungs. 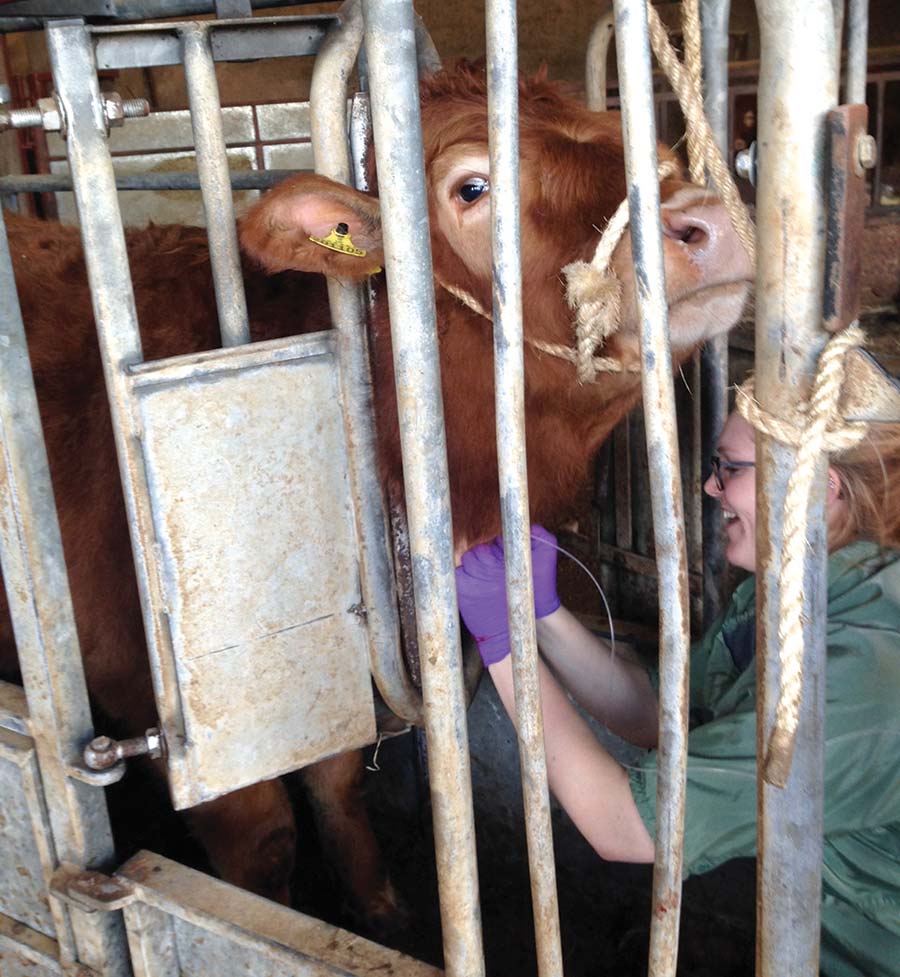 The BAL test will highlight the pathogen creating the respiratory challenge

Saline solution is syringed into the lungs and sucked back out. The sample is then sent for polymerase chain reaction (PCR) testing at a laboratory.

Although the procedure sounds invasive, there is little impact on the animal.

PCR testing has made BALs more accessible as it means the sample can be taken at any time, whereas, previously when samples had to be cultured, they had to be sent at a particular time and kept in very strict conditions.

The results highlight what pathogen is causing the respiratory challenge.

The cause of respiratory disease at Lane Head Farm was identified as Histophilus somni. This is a bacterial agent rather than a virus – Mr Chapman had already been vaccinating against the virus.

Using the results, Ms Ranson was able to prescribe specific antibiotics to treat the infection along with anti-inflammatories.

The herd outbreak cost Mr Chapman about £20 a head (approximately £1,000 in total) just in treatment costs.

Although there is a bacterial vaccine that covers Histophilus somni, as well as Mannheimia haemolytica, Mr Chapman opted not to vaccinate his stock at that time. This is because turnout was nearing and the stock – some of which were being sold as stores later in the summer – would not have benefited from vaccination at that point.

In August, Mr Chapman decided to vaccinate all remaining 55 calves, using the two vaccines to cover bacterial and viral pneumonia at a cost of about £550.

Vaccines need to be administered separately – two doses with a two-week window in-between each one. But he believes it was worth it as there were no cases of pneumonia during the winter.

“We run a closed commercial Limousin herd and firmly believe prevention is better than cure, which is why we vaccinate,” says Mr Chapman.

“The outbreak knocked growth and although they bloomed throughout the summer, we don’t want a repeat.”

“We start calving in March and as soon as they are born, we make sure they are suckling and get enough colostrum. When they are housed, we also make sure they have clean bedding and we don’t try to do too much at once which can stress them.

“Although our buildings are old, we have a concrete yard which the cattle can freely access and where they feed, so they have fresh air every day which helps.”

Ms Ranson says, historically, when farmers have had pneumonia in their herd, they have used a viral vaccine because this has been the only vaccine available.

However, without identifying what pathogen is causing pneumonia it is a “guessing game” and can lead to ineffective vaccines being used.

“All the symptoms look the same with the exception being IBR. By guessing what vaccine to use, means they are not always going to be effective,” she says.

“PCR testing has made things easier, as samples can be stored in the fridge and sent off when convenient. BAL is also better than blood serology as that only tests for viruses rather than bacteria.”

Ms Ranson adds: “BAL basically gives you more guidance making sure you are protecting animals from the viruses and bacteria on your farm. The vaccine you put into an animal should always pay for itself. Once a bacterium is on a farm and it is in an animal’s system, that animal is always at risk of shedding it.”

The cost of a BAL test is about £200-£250 for two animals, which covers the vet’s time and equipment, plus a laboratory fee of £40 for a pooled sample.

A cheaper way of investigating the pneumonia-causing pathogen is by taking samples from a post-mortem.

Ms Ranson says: “A post-mortem is a good alternative in animals with lower value such as a dairy bull calf.

“However, there are too many farmers not even talking to their vets about pneumonia in the first place, let alone investigating the cause. Understanding what is on your farm allows you to protect your stock better and treat them with the correct antibiotics, if needed.”

What you need to know about BAL

What does it stand for?
Bronchoalveolar lavage

What does it do?
It is a small non-invasive surgical lung wash procedure which collects a sample from the lungs. The sample is then sent to a laboratory for PCR testing and highlights the pneumonia-causing pathogen.

When should it take place?
Ideally, as soon as animals show any signs of respiratory disease. If they have a temperature 39.2C or more, they are fighting an infection.

How many animals should be tested?
A minimum of two, but the more the better.

How much does it cost?
£200-£250 covers testing for two animals. Additional laboratory fees are about £40 for a pooled sample.

Do I need to supply any kit?
A good crush is essential to keep the animal restrained while the sample is taken.

How long does it take to get the results?
The results can take up to one week to come back.

What should I do while waiting for the results?
If an animal has a raised temperature of 39.2C or more, they should be treated with an antibiotic and a non-steroidal inflammatory. You should continue to monitor all animals in the group until the result is back.

What should I do when I get the results?
This depends on the results and should be discussed with your vet. If the pathogen is bacterial, you may be required to give a more targeted antibiotics treatment. Your vet will also be able to advise on appropriate vaccines.