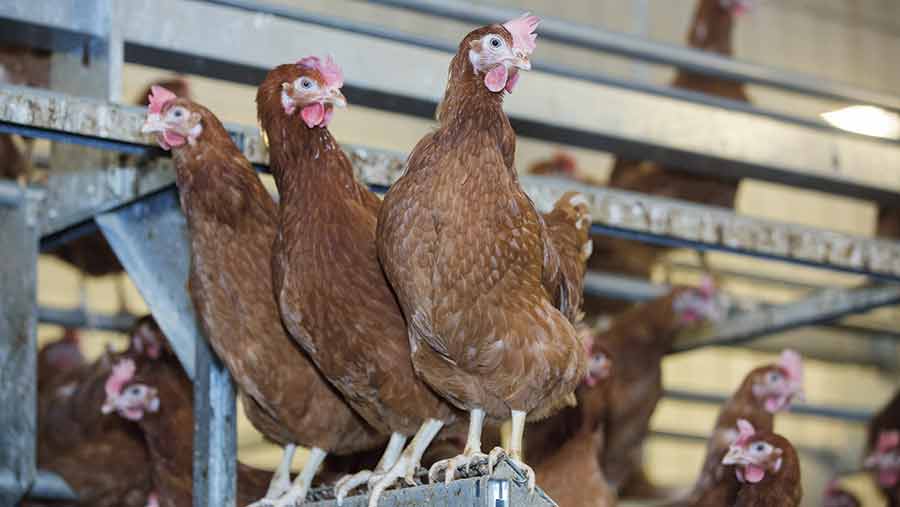 Modern demands on the laying hen have created a “perfect storm” of conditions for generating keel bone damage, one of the leading researchers on the topic has warned.

“Today we have a bird that manifests increased bone weakness and fragility, but has to navigate a more complex and hazardous housing environment,” according to Mike Toscano of the University of Bern, Switzerland.

“A high level of egg production alters the structural integrity of bones, while the housing revolution away from battery cages has challenged the bird’s ability to navigate within its environment,” Dr Toscano told the recent Spring meeting of the WPSA in Chester.

The most well-recognised bone health concern today was fractures of the keel bone, he said.

“More than 50% of birds in our systems will have some level of damage by the end of lay. This is a really serious problem.”

The fractures were found under all housing systems and across all genetic lines, and the data was similar from the UK, Holland Belgium, Switzerland and Canada.

“The resulting fractures are believed to arise from collisions within internal hosing structures, though fractures in systems unlikely to experience high energy collisions suggest other mechanisms at play.”

Other bone health problems included crooked keels which appeared to result from perching, and injuries during removal of pullets and end-of-lay hens.

Despite the notion that the calcium requirement of egg production in the modern, high producing hen was the cause of keel fractures, recent evidence suggested that the ultimate cause was more complex. Although egg output remained relatively high leading up to and beyond 55 weeks of age, the incidence of new keel fractures appeared to level off and even decline beyond 45 weeks.

The source of the damage was a “big question”, one which he was currently unable to answer.

“Thus, while we are well aware the problem exists, we remain without a firm understanding of the root causes, and thus how to eradicate the problems with bone health.

“Although we do believe that falls and crashes are a major cause, even in furnished cages, where we wouldn’t expect high energy collusions, we still get about 38% of birds with damage. It seems that bids may get scared and have a panic and run into something.”

He also thought there may be other causes, such as wing flapping which can cause compression fractures.

Fractures taper off at 40 weeks

One unexplained aspect was the tapering off of fractures after 45-50 weeks.

“What we would expect is fractures to increase with time. The hen is still producing lots of eggs at 45-50 weeks of age, but the rate of fractures is no longer increasing.

“A behavioural change could provide an explanation that finally, at 40 weeks of age the hens have figured out how to navigate around the system. The hen could be adapting to a less hazardous behaviour, or simply reducing activity as she gets older.

To isolate any behavioural effects from bone properties, a series of impact tests were carried out, in which newly killed birds were subjected to precisely controlled collisions of different energy levels. Examination of the keel bones showed that they were in fact recreating the types of fractures seen on farms. The tests showed there was a good relationship between age of bird, impact energy and probability of fracture.

“This fits with what we expected,” said Dr Toscano.

But at 40 weeks this levelled out and then seemed to come down, matching what was happening on farm, which tended to rule out any behavioural adaptations by the hen.

Another possibility was a change in the structural integrity of the keel bone at this time. “Although slight, you do see a gradual increase in bone strength of the keel, which is the opposite of what you find in the long bones.”

There could also be a maturation of cross links in the bone with age, making it stronger.

“So I think osteoporosis definitely contributes to the frequency of damage, but doesn’t provide a full explanation, and I would say it has more of a role leading up to 40 weeks of age.”

Possible interventions to reduce keel bone damage could be broken down into three groups: nutritional, genetic and housing management.

Nutritionally, it was relatively difficult to increase calcium absorption by the hen. “Arguably we have reached the limit on that.”

One possibility was adding omega 3 fatty acids to the diet, which has critical effects on bone physiology.

Studies carried out at Bristol showed they had a “really powerful” effect.  Using a short chain omega-3 based diet reduced keel fractures in one trial from 60% to 20%, he said.

“This was amazing data, and the industry when we met them didn’t believe it.”

In human nutrition, long chain N-3 acids are considered desirable, but a trial diet with 60% of these gave disappointing results, with more fractures than in control diets. Egg output and quality were also worse.

“It could be we were overwhelming the bird with long-chain acids, but reducing it to 40% gave good results. This has a lot of potential for the future.”

In genetic research, five different genetic lines from Hendrix were selected, all housed under the same conditions. Impact tests were carried out at 27 weeks, and one genetic line had 84% of birds with no fractures, while another only had 5% no fractures.

“For some reason, one genetic line was very resistant to fractures, but these differences do not appear commercially. It suggests the genetic potential is there, but overwhelmed by environmental effects on farms.

“Genetics is not the silver bullet we thought it was going to be, and there are limits to what we can do.”

Thirdly, approaches to housing needed designs that would reduce hazardous behaviour by birds, and minimise events like crashes.

One trial showed that fractures increased with the complexity of the house. Another found that providing ramps from upper levels encouraged less damaging behaviour, reduced the number of fractures.

Accelerometers were used to measure the energy values of key bird movements around the house. Birds ascending from the litter to the next tier had low readings, while those jumping down from upper tiers that had crashes had “astronomically higher” energy readings.