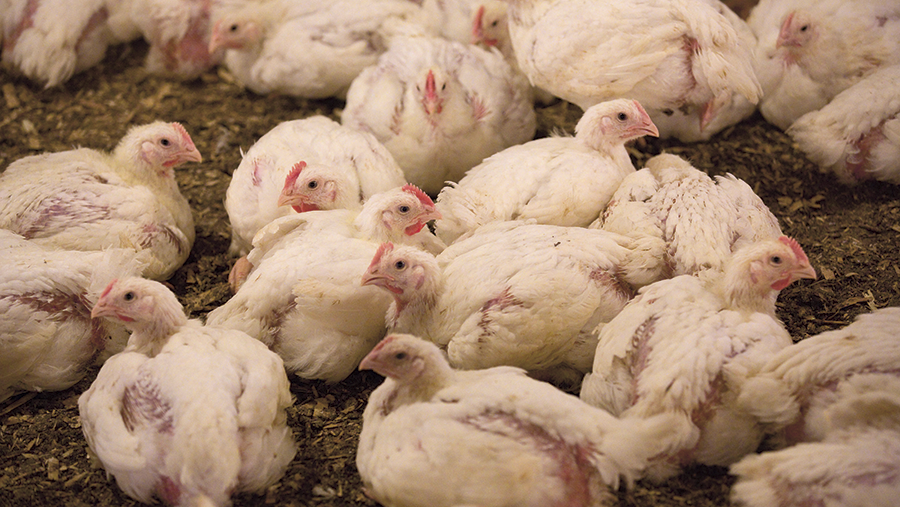 Infectious bronchitis (IB) is a highly contagious virus, and if it gets a hold on poultry flocks can cause severe production problems.

Secondary infections from bacteria such as E coli are also possible, and these can increase the number of condemnations at the processing plant.

See also: A poultrykeeper’s guide to spotting and controlling blackhead

How does infectious bronchitis spread?

IB is a type of coronavirus – but not harmful to humans – which spreads quickly through both the birds’ nasal passage and can be present in droppings.

“We know that it can persist for a very long time in the gut, and when birds are stressed, for example at peak production, it can become active and shed again,” he says.

The disease is described as an infectious bronchitis because the primary target is inflammation of a birds’ trachea, eyes and nostrils.

But it can also damage the oviduct, so is detrimental to breeders and layers, causing misshapen eggs or soft shells, for example.

What are the signs of IB?

Young birds that are infected will appear depressed, and huddle under heat sources.

Respiratory signs like gasping, coughing, tracheal rales (small clicking, bubbling, or rattling sounds from the lungs) and nasal discharge may also be seen in affected flocks.

If infected by the QX strain before they are two weeks old, birds can experience severe swelling of the oviduct, giving them a pot-bellied appearance.

About the QX strain

As a virus, infectious bronchitis continually evolves, and in 2004 a new strain – QX – was discovered in the Netherlands.

The virus is present in a number of European countries and is the strain of most concern to breeder or layer flocks.

Research has suggested that a vaccination programme incorporating both the Ma5 and 4-91 vaccines provides good protection against this variant.

IB viruses can also affect the kidneys – in particular the QX or Belgian strains.

But many of those symptoms can be indicative of other infectious conditions, or even a non-infectious issue in the house, such as problems with ventilation, temperature regulation, or water quality and feed changes.

“These infectious and non-infectious causes can enhance the effect of IB,” says Dr Cserep.

“Control of any infectious disease is based on three major pillars: biosecurity, hygiene and vaccination.”

Both live and inactivated vaccines offer protection against IB, but broilers are only given live varieties.

IB viruses are traditionally categorised as the so-called classical, or Massachusetts, serotypes, and vaccines tailored to this group are used to offer protection.

The group of variants to the classical serotypes is huge, says Dr Cserep, with strains like Arkansas from the US, and other serotypes from France, Germany, the Netherlands and China having been identified in Europe recent years.

In the main, these are controlled by variant vaccines, but the classical vaccines can provide protection as well.

Most broiler businesses will offer one vaccination in the hatchery at day-old.

Depending on the company and epidemiological situation in the area, a second booster may be administered on farm as well.

A vet will advise as to the best programme to administer.

If IB is proving problematic, then stronger protection can be garnered from a dual vaccination.

MSD refers to this as the protectotype approach, where a combination of vaccines offers a broader spectrum of protection.

IB is often considered a higher risk in the winter, but it can be just as common in warmer weather.

Poultry vet Sara Perez highlights the case of a free-range broiler business last summer, which was reporting underperformance across the company.

Birds on some farms were up to seven days behind at the time of slaughter.

The farm in question was in a poultry-dense region where historically there had been a lot of cases of IB in broilers, breeders and layers in the past, says Ms Perez, who is a veterinary director for Poultry Health Services.

Vaccination regime
Birds were vaccinated with an IB Primer in the hatchery at day one, before receiving 4-91 at 10 days and another Ma5 vaccine at 21 days.

“These are free-range broilers so are kept indoors for the first 27 days, and with that programme, we intended to give birds enough protection from challenges by the time they went out,” she says.

As they were free-range, the birds were kept for eight to 10 weeks.

This meant there was more chance for weight loss when compared with a standard broiler-growing programme, and because it was summer staff were moving more frequently between sites.

Post-mortem results
Post-mortems revealed no signs of significant lesions in the trachea or kidney, and no sign of watery belly.

There was some bursitis that was ruled out with histology and PCR, some enteritis and minor coccidiosis, but these did not explain why birds were seven days behind.

Blood testing revealed IB antibodies were higher than would be expected from vaccination alone, so Ms Perez approached MSD, which offered to test samples with PCR through third-party lab X-OvO.

The enhanced testing found IB QX, in addition to the vaccine strain. But before results came back positive, several management adjustments were made:

Reaction to lab data
Once the lab results came back, a specific QX vaccine was given at day 10 followed by 4-91 and Ma5 at day 27.

IB PCR monitoring continued, with tests until 14 days after vaccination or at depopulation. “We found that if there was a positive result in the PCR it was a vaccine strain, we didn’t recover any field strains or QX.

“QX cases dropped from July to October, but we have continued to monitor the area, and we haven’t found any more cases so far,” Ms Perez says.

This article is based on a presentation at the Northern Broiler Conference.