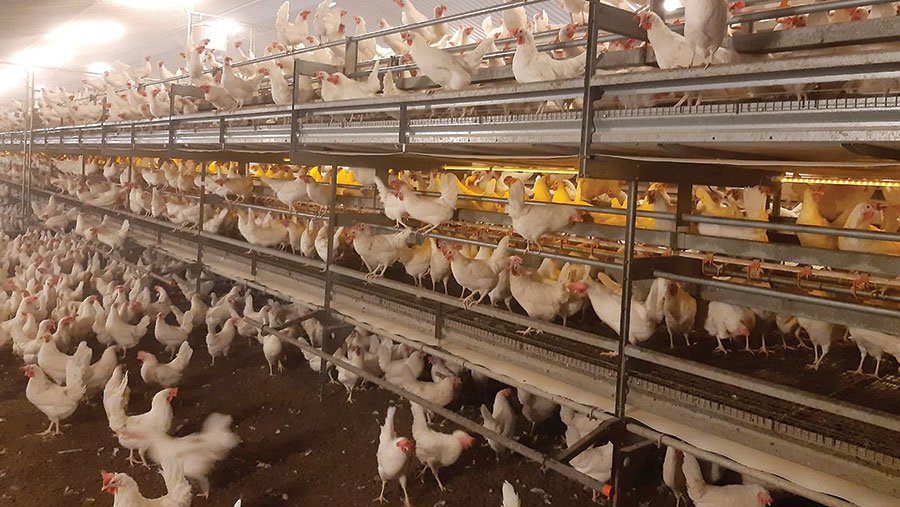 Genetics and a programme of tailored nutrition have helped two Herefordshire farmers successfully lift the laying cycle of their flock of free-range hens beyond the UK’s 72-week average.

As long as everything is working well, 100 weeks is definitely achievable, believes Nick Panniers, who farms with his father, Allan.

“The back end of the cycle is where you get the most profit; that is when you make the money to cover the cost of the pullets,” he says.

The Panniers produce eggs from 64,000 Dekalb Whites at Wellington Farm, Bishops Frome, switching from brown layers in 2018 in response to a new supply contract.

In response, they sourced white birds from Hendrix Genetics.

After visiting farms stocked with Dekalb Whites in Holland, they were confident the breed would last longer in their system than the typical 74-week cycle they had with Brown Lohmanns, although they did have initial concerns that the Dutch systems are mostly barn, while theirs is free range. 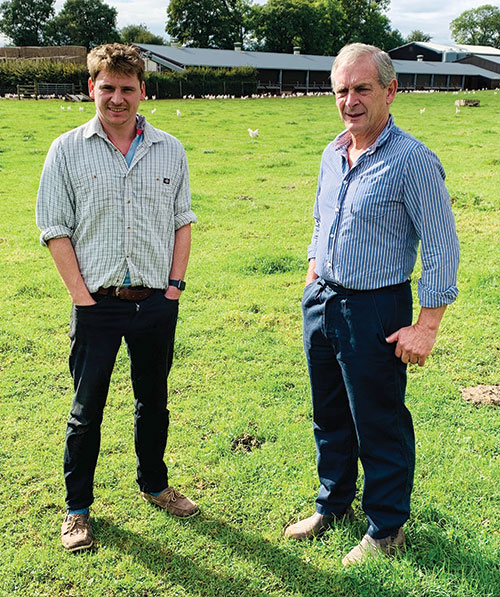 “That was a big point of difference to consider but we discovered that white birds perform extremely well in free-range,” Nick says.

He initially set a depopulation target of 90 weeks, but increased that to 100 weeks to supply the Christmas market.

“As the hens were laying well we agreed to keep going and did so with very few issues,” says Nick.

Their rate of seconds did increase to 12% at week 85, but this was due to an infectious bronchitis challenge.

“That knocked them a bit, so without that we think we can improve on our seconds rate this year,’’ says Nick.

He admits the practicalities around when to depopulate are a consideration.

“This year, if we deplete at 100 weeks it will fall in August when we are busy with the harvest, which doesn’t suit us very well, so perhaps we will need to deplete a bit earlier to balance the work out a bit.’’

The challenges of longer lay

One of the challenges of keeping flocks for longer is maintaining consistent performance. Nick says the system is set up to take pressure off the birds.

Through selection and breeding programmes there are now efficient laying hens with greater persistence of lay, alongside acceptable egg quality and egg numbers.

The Panniers pay about 5% more for white birds, but say this cost is balanced by the breed’s hardiness and longevity.

Their pullets are comprehensively vaccinated for Newcastle disease, Marek’s disease, egg drop syndrome, salmonella, infectious bronchitis, and also for E coli due to a challenge on the farm.

The flock is run on a four-stage diet, with a high but consistent energy structure across all the rations to lower consumption and minimise stress on the birds when they are introduced to a new ration.

The farm’s nutritionist, Tom Lander of Lloyds Animal Feeds, devised the feeding programme. He says taking birds to 100 weeks is “a marathon, not a sprint”.

The strategy for feeding is as follows:

Start of lay ration
This is 18% protein to help birds recover from the stress of transit and to build bodyweight as they come into lay.

5% lay to peak ration
Crude protein level reduces to 17%, but fibre levels increase slightly to 5% and calcium to 3.75%.

“Layers coming into lay very quickly can become stressed easily and their faecal matter can become quite loose,” he says.

The extra calcium is important as the birds’ rate of lay increases.

“We give the bird every opportunity to absorb the right amount of calcium to reduce second quality eggs,” says Mr Lander.

Post-peak ration
Once birds have maintained peak production for several weeks and egg quality and size are appropriate, the amino acid profile is slightly reduced, for methionine and lysine in particular, to prevent eggs getting too large very quickly.

This diet is 5.5% fibre, combining digestible and non-digestible elements, with supplementary dried lucerne bales used in the housing.

Home-grown oats are milled on farm and included at 5% post-35 weeks, increasing to a maximum of 8% later in lay.

Oyster shell and limestone content is increased every 10 weeks to reduce calcium exhaustion in the medullary bone and aid its transfer to the digestive tract.

Post 75-80 weeks
Eggs start to reduce in quality but increase in size, putting pressure on the bird.

To manage this, this diet is lower in lysine and methionine while, at 4.5%, the maximum level of calcium that can be usefully absorbed and digested by the birds is included.

This policy pays off, says Mr Lander. “We had some wheat samples where protein was a little higher than what we expected so we addressed the balancer to take account of that result.”

This made sure that they were not over-supplying the bird with crude protein and the amino acid profile stayed in line with target levels.

The birds are flighty when they arrive, which can make weighing and stock management a challenge. But the Panniers and their stockmen, Gary Morgan and Jackie Dorrington, overcome this by weighing before the lights come on.

White birds pick up both good and bad habits in no time, says Nick.

“They quickly learn to go up into the system at night and into the nest boxes but they will also learn to lay floor eggs, so you have to be on the ball.”

The early morning routine is consistent with birds walked every morning, at the same time, to check for feed, water and any changes to behaviour. Birds are not disturbed in the afternoon.

Water is tested every 12 weeks. If it is high in bacteria, with a total viable count (TVC) exceeding 100, an acid is applied and flushed through the drinker line. However they consider anything over 50TVC to be undesirable.

Water is particle and UV-filtered for each house to help reduce the TVCs further. “This maintains a low TVC on the farm, this solves a big part of the production puzzle,” says Mr Lander.