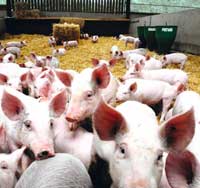 Weighing up the welfare concerns of teeth clipping and tail-docking is controversial and difficult.

It is still performed by many farmers in the EU as a method of reducing injuries to the sow’s mammary gland and reducing tail biting after weaning.

And with up to 90% of pigs in the EU still undergoing routine tail-docking, despite EU legislation inhibiting routine practice, just what is the welfare concern of teeth clipping and tail docking?

According to senior scientist Armelle Prunier, at the INRA Institute, France, the question of long-term pain after docking pigs’ tails remains open. “Although these husbandry practices are criticised since they are a source of pain, the research results about the severity and length of pain is varied.

“Pigs undergoing teeth clipping or grinding do show defence behaviour exhibited by leg movements, and also have increase chewing behaviour when back in the home pen, however, behaviours like time to first suckling is unaltered.”

Research has also shown unaltered plasma profiles of cortisol and ACTH in the three hours following teeth clipping, which shows even if pigs were in pain or stressed there was no clear activation of adrenal axis.

However, histological analysis of teeth following clipping and grinding has shown lesions. “Most lesions appear in greater magnitude after clipping rather than grinding and since this induces severe pain in humans, its likely teeth clipping induces strong pain in piglets, even with grinding,” she said.

“We have also found unaltered levels in plasma profile of cortisol and ACTH following docking and there has been no data to suggest any long term pain after tail docking pigs. Also evidence constituting teeth-clipping and tail-docking as a route for bacterial entry and local infection is scarce,” said Dr Prunier.