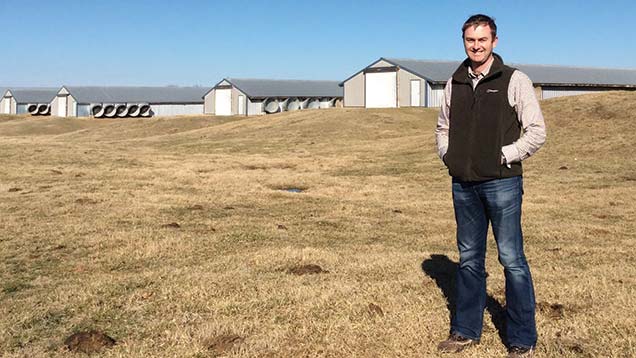 Ending or avoiding thinning where possible will improve campylobacter contamination rates, help fight disease challenges and be better for bird welfare, according to area manager for Hook 2 Sisters and Nuffield Scholar, Werner Strydom.

The UK should also adopt a mandatory testing programme for campylobacter levels at the end of the processing line, to keep driving improvements through the poultry industry.

Those were the two key observations made by Mr Strydom, speaking at this year’s Northern Broiler Conference, following a global tour of poultry farms and businesses that have had success in tackling the bug.

“We assume that the chicks do not hatch with the bacteria, so the bacteria must be introduced to the birds at some point during their lives,” he told the conference. So the main aim of his research is to establish where in the production cycle the bug is introduced and the most effective way to reduce or eradicate it from fresh poultry.

Although there is some way to go before the project reaches its conclusion, much of his field research has now concluded.

“They were the worst in the world,” said Mr Strydom. “The pressure on the industry has led to changes to their monitoring system, and I suspect they will bring levels back even further in the coming years.”

Farms are still thinned up to three times, and the climate is warm and wet – both thought to be contributors to high campy levels.

But measures introduced to get it under control span the entire poultry supply chain and carcasses are washed with a chlorine solution when processed. “New Zealand and the US feel the most cost-effective way to tackle campylobacter is in the processing plant,” said Mr Strydom.

This approach can also keep cost of production lower on farm.

Despite this focus on the processing plant, biosecurity is taken incredibly seriously in New Zealand, and it begins with entry to the country. The import of any foodstuff is tightly controlled to maintain biosecurity on the islands, and the country is self-sufficient in poultry, meaning no need to import potentially contaminated meat.

A special focus has also been placed on evisceration; feed withdrawal times are strictly enforced and the country has upgraded its machinery. This is because the point at which carcasses are cut is a known place for contaminated birds to infect clean ones. Modules are also meticulously cleaned and thoroughly dried out.

This attitude feeds back to farms, with a high importance placed on biosecurity, control of insects and stringent hygiene. Mr Strydom says it is a culture of farming that we have not quite arrived at in the UK.

The improvements to date have been driven by a mandatory testing programme in the processing plant – a measure Mr Strydom believes will help in the UK.

The US has very strict targets on the control of both campylobacter and salmonella, borne out of a litigious culture. The country has one of the lowest human infection rates of campylobacteriosis in the world.

American poultry farms do not thin, because they find the disease risk of doing so too high. But neither do they change litter between crops, allowing it to build up over several cycles.

The big-hitting impact on campylobacter is in the processing plant, where poultry is treated with a watered down chlorine substance that obliterates bugs on the surface of the meat.

But human levels of contamination are probably disguised by the country’s private healthcare system, which most likely results in under-reporting.

The poultry industry in this Scandinavian country is very different to the UK’s, and can be characterised by smaller, family-run farms. There is a strong emphasis on biosecurity, the country is totally self-sufficient in poultry and consumers tend to prefer smaller whole birds.

They also benefit from colder weather that can all but eradicate the bug. Indeed, testing is suspended through the winter in Norway.

Any poultry that tests positive for campylobacter is either cooked or frozen. That applies to just 6% of flocks.

Norwegian farmers are limited to growing a maximum of 140,000 birds a year each, and most often have a single shed that fits into a mixed farm. It is often a housewife that will tend to the birds while her husband has an entirely separate job, says Mr Strydom.

There is also a 2% financial penalty for farmers sending a campylobacter positive flock to slaughter, further encouraging best practice.