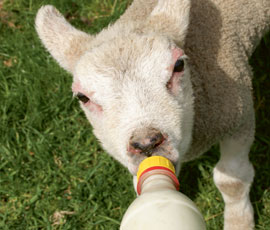 Lamb milk replacer produced by Frank Wright Trouw Nutrition has been withdrawn from the market after excess vitamin A was found to be the cause of several lamb deaths.

Milk replacer from 27 distributors have been affected and began being recalled on 13 April after they were found to contain excess quantities of vitamin A.

Although half of the product remains in stores, all merchants supplying it have been informed, assured the company’s technical director John Allen.

The product, which was manufactured between February and March, makes up just 0.15% of all replacer produced. “We do feel very bad about the incident and for those affected, but fortunately it is not a massive volume of the product that has been affected. However one death is too many,” said Dr Allen.

Problems first were identified at the end of March and since then the company has advised merchants and the Food Standards Agency. “We were also working with the VLA to try and identify what was going on.”

Excess vitamin A is essentially toxic to lambs and can cause excess sweating, dermatitis, urine scald, abnormally stiff gate and recumbancy. The VLA said affected lambs have been between three days and four weeks of age. The group morbidity is high (up to 100%) and the mortality 0-10%.