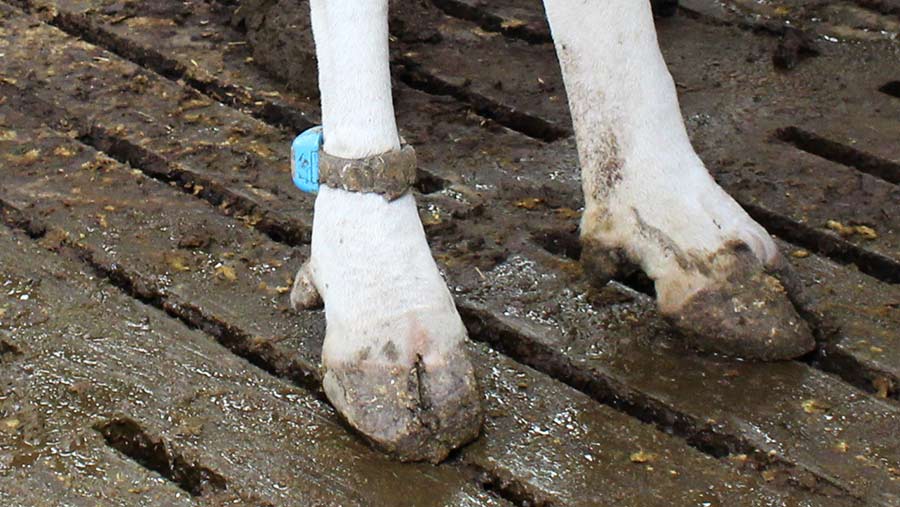 Rear leg sensors fitted on all cows in a Scottish dairy herd has been key to getting on top of lameness and identifying lying time differences between groups of cows.

Brian, Michael and Sheila Yates, East Logan Farm, Dumfriesshire, installed the Cow Alert system two years ago, initially as a heat detection aid. The sensors are based on a tri-axial accelerometer which monitors a range of things (see “About Cow Alert”).

The Yates family soon realised it could be used for more than just heat detection, with an additional lameness module highlighting cows that are lame, even when visible signs are not apparent.

Benefits of the system

Although there were no lameness records prior to installing the system, the family say it has had a big effect on the level of lameness and has also highlighted some areas for investigation.

Cows at East Logan were being culled for lameness prior to the system being installed, explains Michael.

“Although we don’t have a record of how many were culled for lameness, it was an issue we wanted to focus on. We were waiting until they were visibly lame before we would act,” he said.

Michael adds: “When we first started using the system, we had a lot of amber cows being flagged, even though they were showing no obvious signs of lameness. The system was probably flagging 15-20 cows a day and we were then having to lift their feet and investigate what was going on.”

The farm put in place a protocol for dealing with amber cows. It includes:

Michael says they have been amazed by what they have found when they have trimmed the feet. “It is making us look at cows we wouldn’t have previously looked at. We have found cows that have had bruising that could have developed into an ulcer. It means we pre-empt issues before they become a problem.”

There is now maybe one amber alert a day for the Yates family to investigate, as they are on top of the problem.

Working with Hugh Kerr, senior product specialist at IceRobotics, the Yateses have also been able to identify differences in lying times between groups of animals.

The milking herd is split into three groups. The top-genetics cows are housed in bigger cubicles, with double-thick mattresses. The other two groups are on older beds with thinner mattresses.

The system has highlighted cows on the thicker mattresses are lying on average up to 12.5 hours/day, whereas the other cows are averaging lying times of 9.5 hours/day.

Mr Kerr explained: “Lying time is thought to affect milk yields, with every hour of lying equating to an extra 1.7 litre of milk in the tank. It’s something we want to investigate further to see exactly what impact this is having on milk yield in the herd at East Logan.”

He added: “When it comes to intakes, the blame is often put on the nutritionist if cows are not eating what they should. However, lame cows will not eat as much.

“At East Logan, the cows are at the top of their game, with a feed efficiency of 1.5-1.6 litre of milk for every kilogramme of feed consumed. We can’t improve this any more through nutrition. The only way we can push it up further is by altering cow behaviour by maximising things such as lying times.”

Michael says they are now considering upgrading the mattresses for the other two groups. He added: “Even though this is an expense, if every extra hour lying is an additional 1.7 litre in the tank, then it’s worth it.”

Installing a system like the one the Yates family uses will cost from £1,500, with each rear leg sensor costing £77. The cost equates to 0.2p/litre.