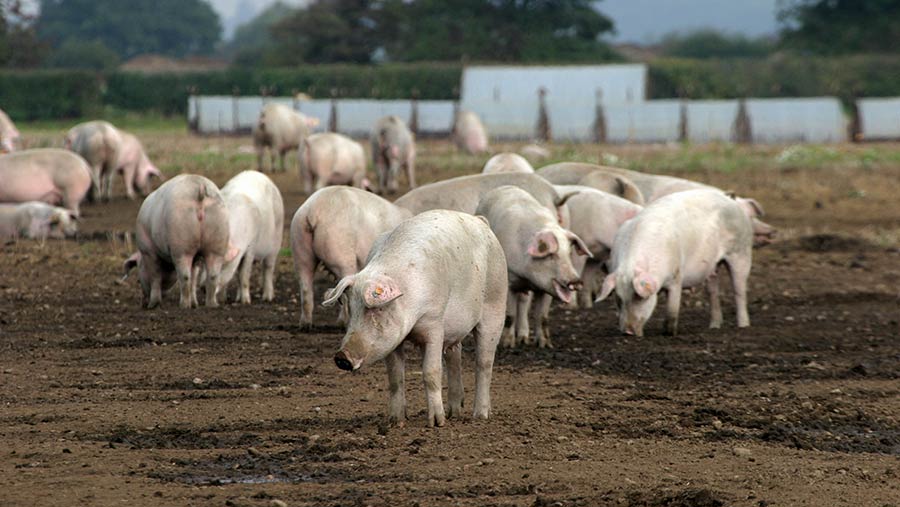 African swine fever is the biggest threat to commercial pig production the industry has ever seen, according to the World Organization for Animal Health.

The WHO predicts that the viral disease will have killed a quarter of the world’s 800 million pigs before the epidemic is brought under control.

And, although Britain has not yet seen a case, experts fear an outbreak could cost the UK pig sector hundreds of millions of pounds.

We look at how to recognise the disease, how it spreads, what the figures of infection are telling us and how to reduce the risk of your herd becoming infected.

How to recognise ASF 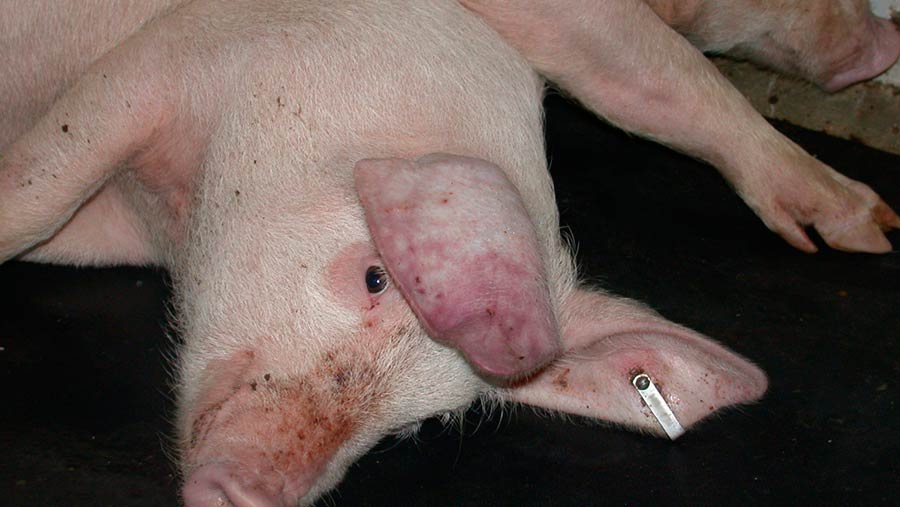 Symptoms include lassitude and reddening of the skin © Defra 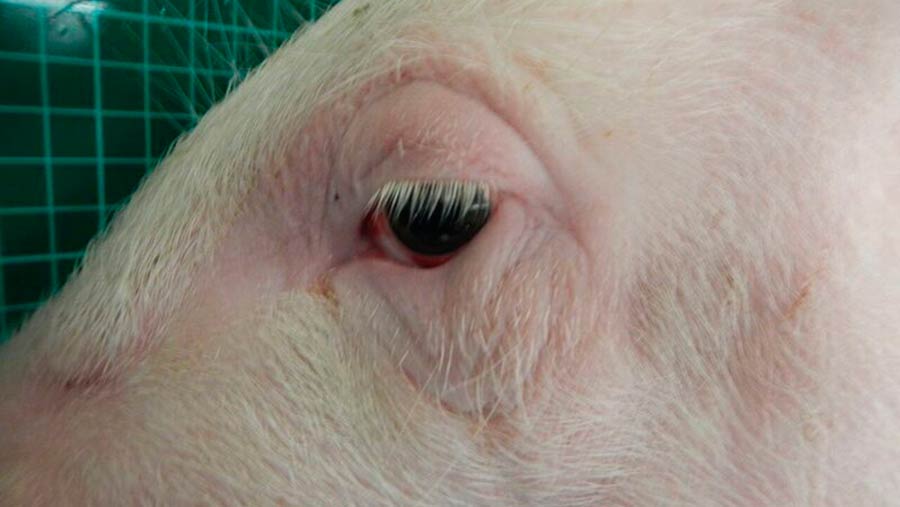 Infected pig showing conjunctivitis and reddening around the eye © Defra

How the disease is transmitted

ASF survives in faeces, urine and blood as well as pigmeat, and can survive for months in smoked, dried and cured meats and possibly years in frozen meat.

The disease can be spread by pigkeepers and members of the public feeding catering waste, kitchen scraps or pork products to their livestock. It is illegal to do so.

The virus can be transmitted through:

Defra has launched a national awareness campaign, which includes the distribution of hard copy posters and digital screens at airports and seaports, along with other Border Force messaging.

It warns that travellers from an affected area must not bring back products of pig origin, or any equipment or other goods which could potentially be contaminated with the ASF virus.

All illegally imported meat will be seized and safely destroyed while travellers who bring it in face prosecution and a large fine.

The disease has a mortality rate of up to 90% and was first identified in sub-Saharan Africa in 2007.

But it wasn’t until August 2018, when the first cases were reported in China – home to half the world’s pigs – that the disease escalated into a crisis.

In just 18 months, China’s production capacity has been reduced by a quarter, with forecasts of a further 15% decline this year.

While China has been the epicentre, the disease has swept outwards across South East Asia and through eastern and central Europe.

African swine fever (ASF) is now present in more than 50 countries, spreading as far west as Belgium in wild boar and in commercial herds to within 12km of the German border.

A report by Defra and the Animal Plant and Health Agency (Apha) on 6 February showed that Greece was the latest country affected after the disease crossed from neighbouring Bulgaria.

It brings the total number of herd outbreaks in European commercial and backyard pigs to 1,910 while cases in wild boar stand at 4,513.

On one Romanian farm 140,000 pigs were slaughtered in a bid to contain the virus spread. Poland, Lithuania and Russia have also recorded dozens of cases.

A significant development came on 13 September last year when Belgian authorities identified the disease in wild boar close to its border with France. That finding prompted Defra to raise the UK risk level from low to medium, where it remains.

“It is inevitable that the disease will find a way across the German border and when it does, it will immediately affect us all,” Dr Davies says.

Germany is Europe’s largest pig producer and sets the European price. It is also a major exporter to China with trade soaring to fill the supply void caused by ASF in the Far East.

“Despite China’s ongoing battle with the disease it will, somewhat ironically, ban all imports from Germany as soon as authorities report an ASF case,” Dr Davies says.

A report produced by AHDB Pork explains that such a ban would see 500,000t of German export pigmeat flood back on to the European market.

The situation could have been even worse without the rise in Chinese demand, Ms Wilkins suggests.

The extra demand from China, which is forecast to continue rising, means the European market is unlikely to be swamped by retained product from Germany, she says.

Impact of a UK outbreak

AHDB’s head of animal health and welfare, Mandy Nevel, says the impact of a UK case would depend on how the disease got in and which animals were affected.

Whatever level the disease is at, the first thing that will happen is an export ban, Ms Nevel says.

Dr Davies warns that this would have serious repercussions, including extended protection and surveillance zones around cases, with trade restricted to within these areas.

Outside of these zones all trade including exports could continue under the EU policy of regionalisation.

However, while some countries recognise regionalisation and allow imports to continue, importantly, China and a dozen others do not.

“It means our export trade with China which has grown by 90% year-on-year to £100m annually, will be lost – overnight,” she warns.

Beyond that, costs incurred by rural businesses through restricted access to the countryside could spiral into billions.

Aside from the impact of trade costs, Dr Davies paints a bleak picture of what farmers might face if the UK cannot keep the disease out.

The physical restrictions imposed on farms will hit hard, she warns. Pig production is a continuous flow and restrictions, particularly on multisite operations, will cause major difficulties.

Each site on these units has a specialist area of production geared to a defined growth stage and therefore to a particular size of pig.

Restrictions will mean younger pigs will be stuck in housing that they have outgrown while numbers on the farm will quickly swell, creating enormous pressure. For those caught up in a 40-day temporary control zone it will be a huge struggle.

Dr Davies says the seriousness of the situation means the disease must be kept out of the UK.

“Unlike Germany where the odds are stacked against them [because of land borders] it is not a foregone conclusion that we will be hit by the disease,” she adds.

“It is much more in our hands and farmers must take an uncompromising approach to biosecurity now. We must be constantly battle-ready.”

Defra chief veterinary officer Christine Middlemiss echoes Dr Davies’ views and underlines the importance of biosecurity during movements on to and off farms.

“We are in no way complacent and have robust measures in place to protect against ASF,” Ms Middlemiss says.

“We are working with Border Force to make the most effective use of their operational resources, including routine seizures, use of detector dogs and targeted, intelligence-led operations to ensure that no affected products reach the UK.

“We will also continue to work closely with the UK pig sector to raise awareness of the risks and advise on maintaining high biosecurity standards, including minimising the risk of the virus infecting commercial pigs.”

The government and its agencies have well-established disease control strategies which are continually refined in readiness for animal disease outbreaks.

The contingency measures include plans to compensate farmers hit by ASF.

Compensation rates depend on whether the farm is directly affected by the disease or is culling because it has a neighbouring unit where the herd has been affected:

With payments at half the level on disease-hit units the compensation structure creates a greater onus on farmers to keep the disease out.

It is also essential to have a contingency plan for what to do in the event of a notifiable disease outbreak. By law, suspicious symptoms must be reported to Apha.

How to report a case

ASF is a notifiable disease and any suspicion must be reported to Apha immediately by calling the Defra Rural Services Helpline on 03000 200 301.