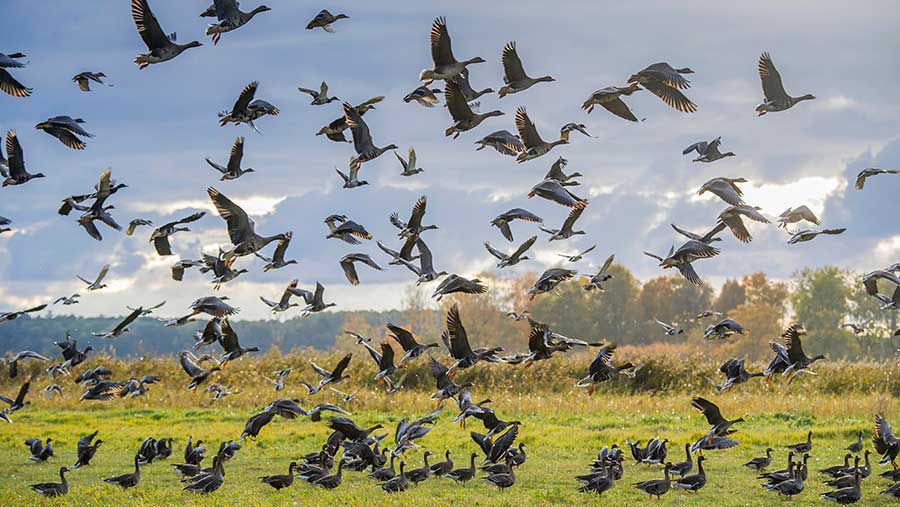 Poultry keepers across the whole of England have been ordered to step up their biosecurity following the discovery of more wild birds killed by avian influenza.

Defra has confirmed that 13 dead birds have been found with the virus in Warwickshire.

It follows the discovery of 17 dead swans and wildfowl in Dorset last week – a figure that has now risen to 31 infected birds.

See also: What are the signs and symptoms of avian influenza?

As such, a bird flu prevention zone has been declared across the whole of England, making it a legal requirement for all bird keepers to follow strict biosecurity measures (see panel below).

Testing of the birds found in Warwickshire is ongoing. However, it is expected this will be the same H5N6 strain of the virus that has been circulating in wild birds across Europe in recent months.

Defra chief vet Nigel Gibbens said: “Whether you keep just a few birds or thousands, you are now legally required to meet enhanced biosecurity requirements and it is in your interests to do so, to protect your birds from this highly infectious virus.”

What to do in a prevention zone

Both the NFU and the British Free Range Egg Producers’ Association have welcomed the move to extend the prevention zone to all of England.

NFU chief poultry adviser Gary Ford said: “The health and welfare of their birds is farmers’ top priority and practicing good biosecurity is the best way of guarding them from this disease.

“It is important keepers remain vigilant and promptly report any concerns to their private vet or directly to the Animal and Plant Health Agency on 03000 200 301.”

Public Health England have advised the risk to public health remains very low and the Food Standards Agency have said bird flu does not pose a food safety risk for UK consumers.

Updates on the latest avian influenza situation can be found online at Defra’s bird flu website.