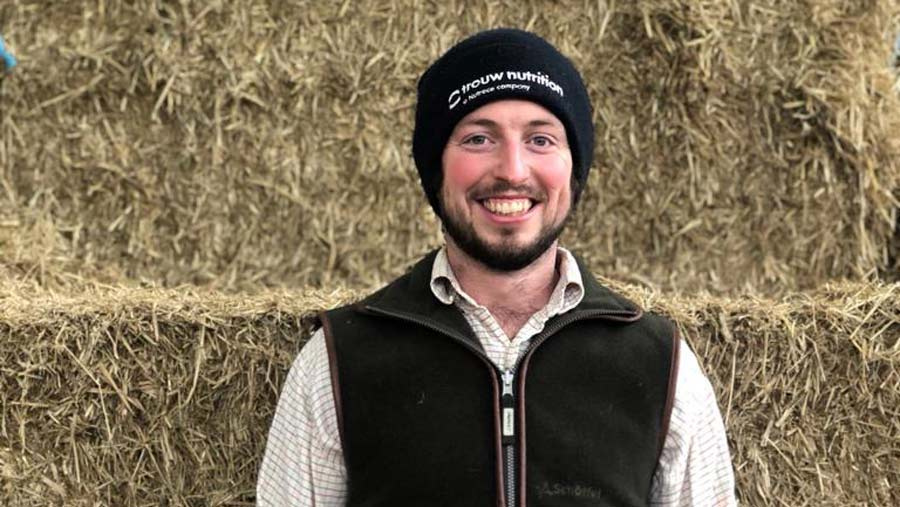 Setting his farm up as a TB isolation unit (IU) has proved a successful business model for Cheshire farmer Ben Paterson.

He purchases batches of around 80 British Blue cross dairy calves at a time to fill the unit. These calves have to be sourced from one farm.

Once arrived, the calves are isolated within the TB IU and undergo two short interval tests.

Should they go clear after these tests, they receive officially TB free (OTF) status and can be sold to any outlet, regardless of the TB status of the herd they came from.

As Mr Paterson doesn’t have any other livestock at the farm, it is ideally suited as a TB IU. This is because it has to be self-contained, with separate management, equipment, and feed.

For Mr Paterson, sourcing calves from one unit, rather than having to go to the market and select calves from multiple sources, proves beneficial from a time, calf health, and animal quality perspective.

Calves are sold at the market at around five months of age.

Although he has chosen to use a TB IU as a standalone business, it is possible for a cattle farmer to set up a TB IU on their own farm.

This could be a useful way to maximise the value of every animal and cope with high stocking densities during a TB breakdown.

Mr Paterson has the following advice for farmers when setting up a TB IU:

The initial application is quite lengthy

The process of getting a TB IU initially approved by the Animal and Plant Health Agency (APHA) takes time and money. “It’s quite a lengthy process the first time. It takes you a month or so,” he explains.

This involves filling out an application form before being visited by an APHA vet, who will go through additional paperwork and advise on building changes. All TB IU application forms need to include the detail of the farm from which animals are being sourced.

Any TB IU has to be self-contained and wildlife-proof. This means the building needs to adhere to certain regulations. For example, doors need to be smooth and solid and a minimum height of 1.5m.

With this in mind, the initial start-up costs are quite high as everything needs to be right before approval.

Mr Paterson says planning is key. “You have to handle calves within the wildlife-proof area (i.e. the building).

Next time I’d make better handling facilities. The second building will be built around the handling system,” he says.

Once the building/site of the TB IU is approved, subsequent applications are more straightforward

A TB IU is temporary and only applies to one batch of animals. Once a TB IU is depopulated, a new application is required before it can become a TB IU again.

However, as APHA will have already visited, Mr Patterson says applying for another licence is usually quicker.

“It can be approved within 24 hours, but it depends on the status of the farm from which the animals originated,” he says.

Once the site is initially approved, it is subject to yearly checks from APHA.

There are a lot of variables

There are a lot of factors that can influence the speed of approval. It largely depends on the stage of a TB breakdown on the farm where the cattle originated.

For example, a TB IU cannot be filled until all of the reactors have been picked up from the original farm and a post-mortem has been carried out.

There are pros and cons in terms of income

Mr Paterson tends to buy calves from restricted herds at around half to two-thirds of market value. He says he aims to pay more than the large calf-rearing companies to build relationships and ensure repeat business.

His reasoning for not paying full price is the lack of flexibility afforded by running a TB IU.

This means all calves have to stay on the unit until they have passed two short interval tests, so there is no option to sell one or two calves when they’re ready.

“I make more per head on TB IU calves, but I can’t get the throughput regular calf rearers can,” he says.

To maximise turnaround, Mr Paterson ensures TB tests are booked in early. “The day I close the door to my unit I book a 60-day test.

I have the two tests and then book them into a weanling sale immediately.”