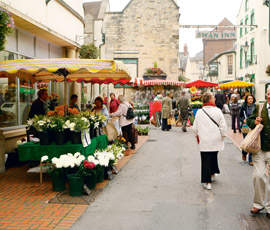 Farmers who support badger culling could be banned from trading at a farmers’ market in Gloucestershire under plans to force traders to sign an anti-cull agreement.

Stroud Council wants to prevent any farms which that badger culling on their property from trading at the market after councillors agreed they did not support badger culling as a way to tackle bovine TB in the county.

Under the agreement being proposed, traders will also have to confirm that they have not sourced products from farms taking part in the planned cull.

“We have had a group meeting and everyone is agreed that badger culling is not the right way to go,” said Labour councillor Paul Denney.

“It’s still going to council and we want everyone to be on board.”

The wording of the agreement was still being finalised, but it would be in place by June, he added.

Meanwhile a leading scientist who worked on the randomised badger-culling trial (RBCT) and advised DEFRA on its approach to tackling bovine TB, has warned farmers they have little to gain from backing badger culls.

David Macdonald, director of Oxford University’s Wildlife Conservation Research Unit, said results from the RBCT showed that long-term gains from culling badgers were minimal, especially when compared to how much they cost farmers in terms of finance and public support.

Speaking at the British Society of Animal Science conference at Nottingham University on Tuesday (16 April), Professor Macdonald, who has spent 25 years studying badgers, said outcomes from pilot culls due to be carried out later this year were likely to leave farmers feeling they had backed the wrong option.

“You have to make a judgement over whether that’s worth it to the farmer and the ecosystem.”