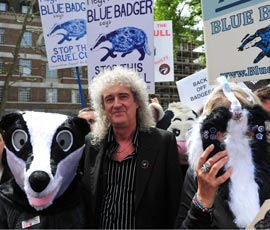 Hundreds of animal rights supporters turned out in London over the weekend to protest against the badger cull, which could begin any time now.

Queen guitarist Brian May led the march against the cull on Saturday (1 June) as pilot culling licences came into effect for west Somerset and west Gloucestershire.

Between 1,500 and 2,000 protesters, many dressed in black and white, chanted “Your cull, your lies, your greed”, “Stop the Cull” and “Shame on DEFRA” during the march to Westminster.

Later, Mr May delivered a petition of 234,000 signatures against the cull to Downing Street.

The march coincided with a rally held by the British National Party (BNP) a few streets away over the murder of Drummer Lee Rigby in Woolwich a fortnight ago.

However, the anti-cull protest passed off peacefully. Although at one point, anti-cull protesters allegedly set fire to a pile of newspapers, sending smoke drifts across the grounds of the Houses of Parliament.

A Metropolitan Police spokesman said: “We are unable to give a specific breakdown of how many people were arrested in the badger cull protest.

“There were a number of protests in London that day and it was one policing operation.”

The Labour Party, which opposes the cull, has tabled an Opposition Day debate for this Wednesday (5 June).

“I will be happy to debate bovine TB, which is causing real misery for our cattle industry and will cost the taxpayer £1bn over the next decade if we don’t get it under control,” said the minster.

“The science is clear that culling can help to reduce outbreaks of TB as one part of our approach, which also includes strict cattle movement controls and another £10.6m investment to develop cattle and badger vaccines.”

The pilot culls, due to begin any time now, will assess the safety, humaneness and efficacy of culling badgers by trained marksmen using a combination of free shooting and cage trapping.

During the six-week pilots, up to 5,094 badgers will be culled across both counties. If the policy is successful, DEFRA will roll it out more widely to other “TB hotspots”.