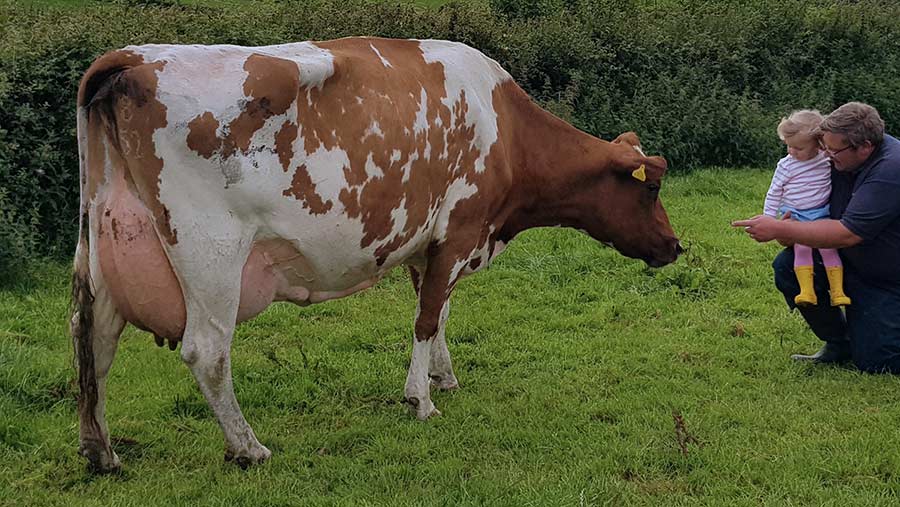 Stuart Williams and his daughter with Ayrshire Amanda, one of the latest casualties of their TB breakdown © Debbie James

The owners of an elite dairy herd could be forced out of the milk sector after losing 60% of their cows in just 16 months.

The Williams family, who run the multi-award-winning Willhome herd of Ayrshires, Holsteins and Brown Swiss in Pembrokeshire, are distraught after their latest TB test resulted in the slaughter of 17 animals, bringing to 138 the cows removed from the herd since April 2019.

Among the latest casualties was Willhome Challenger Amanda EX94, who produced her fifth calf just 10 days before she was slaughtered on 7 August.

Her accolades included being placed in the top three at the All Britain Calf Show and at the National Ayrshire Show.

She was destroyed because it was the third time a test had flagged her up as an inconclusive reactor (IR); she had, however, tested clear on a gamma blood test after the second IR reading.

Stuart Williams, who farms with his parents, Philip and Sharon, and his wife, Vicky, questioned the value of gamma testing.

The family, he said, had pleaded for her to be spared. “We tried to make the case that she had tested clear on gamma and should therefore have been treated as a first-time IR on that third test, but the ministry wouldn’t accept that. What is the point of that blood test?”

Mr Williams described her as a “gem”. He said: “When all her show miles are added together, she could have gone from Pembrokeshire to Madison, USA. It’s not just her show success – she was an absolute gem to work with.

“She never let us down, especially the last 10 days when she produced a heifer calf and gained extra points to be EX94 (3E) with her fifth calf. But now the system has let her down.”

Until April 2019, the Willhome herd had never had a breakdown in the two generations that the Williamses have farmed at Home Farm, Leweston, near Haverfordwest.

The 16-month breakdown has nearly destroyed their business, reducing their milk income by 52%.

It has been a massive mental strain, and a physical one too as they currently have to run three separate herds. They had been given permission to buy 40 cows, but these must be kept separate from the main herd, as do the group of IRs. 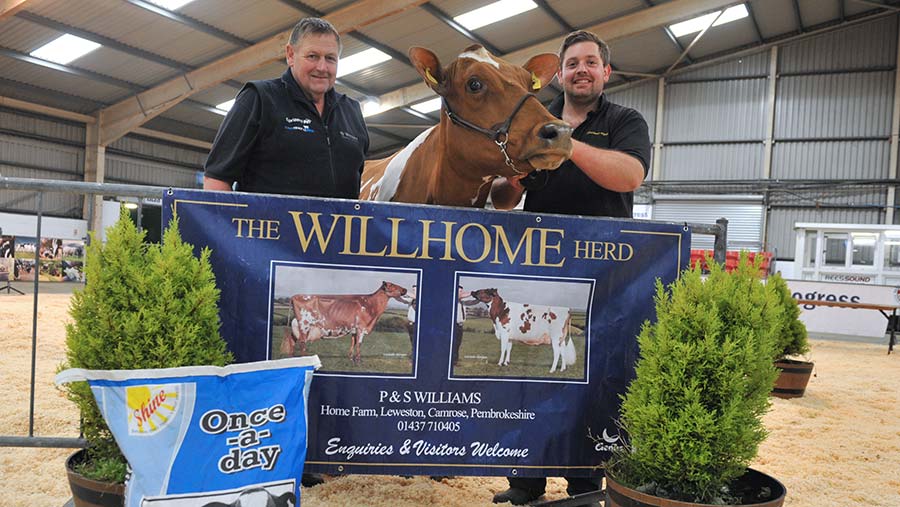 Philip and Stuart Williams, pictured at the Welsh Dairy Show, have lost 52% of their milk income © Debbie James

The next test in 60 days’ time could break the business as it will fall under the Welsh government’s Enhanced Measures policy. In Wales, tests on herds that are 18 months into a disease breakdown are carried out under severe interpretation and all IRs are removed for slaughter.

Mr Williams anticipates that this test could force some difficult decisions for the family – had the most recent test being carried out under severe interpretation he has been told that 47 cows would have been lost instead of 17.

With cow numbers down to 130, he said further losses would make the business unviable. “Our milk cheque has dropped by 52% and we can’t sustain the business on that, let alone with more losses.”

Mr Williams said bovine TB was casting a shadow over the whole family, especially his father, who is past president of the Ayrshire Cattle Society. “Dad is taking it very badly because the herd is his lifetime’s work. Any cows that we are given permission to buy back in are never going to be our cows.

“Today was the hardest day because of the loss of one of our best cows. But we have also had days when we have had to watch heavily pregnant cows being shot on the yard, watching their calves kicking for several minutes later.

“I wouldn’t wish that on anyone.”

In a statement, the Welsh government said its priority was to find and remove infected cattle from herds before they had the chance to infect others.

Recent testing had provided additional options for testing higher-risk animals, and had allowed the government to review its earlier policy of slaughtering all inconclusive reactors (IRs) in persistent TB breakdowns, it said.

That review has resulted in a revised policy of continuing to slaughter all standard IRs, but to conduct antibody and gamma tests on severe IRs.

Cattle are only permitted to be retained in the herd, in isolation and pending follow-up skin testing, if they test negative to both blood tests.

The revised policy employs an antibody test approved by Welsh ministers, alongside the gamma interferon test, to increase the chance of detecting infected animals, while at the same time reducing the risk of removing cattle which may not be infected.