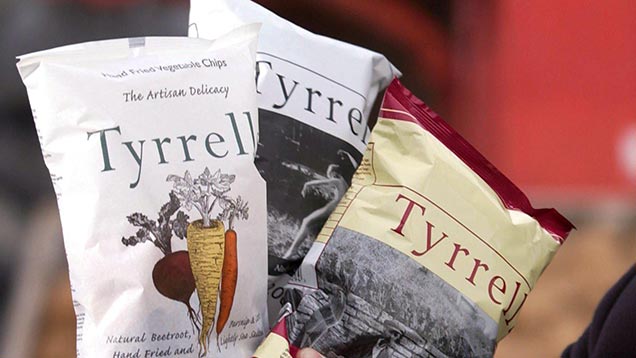 Activists have targeted Herefordshire company Tyrrells Crisps in their latest bid to derail the badger cull.

Anti-cull group Stop the Cull has urged its supporters to contact David Milner, chief executive of Tyrrells Crisps, and ask him to stop purchasing potatoes from Cobrey Farms.

According to the group, Cobrey Farms is allowing marksmen to shoot badgers on its land on the Herefordshire/ Gloucestershire border as part of the government’s badger cull pilots.

Cobrey Farms, run by the Chinn family, is a major supplier of potatoes to Tyrrells Crisps.

On its website, Stop the Cull has published a mock image of Mr Milner in a field of potatoes with the headline: “Tyrrells: Flavoured with badger blood.”

“Stop the Cull are clearly seeking to intimidate perfectly law-abiding farmers and businesses and publishing the personal details of a company CEO on its website is totally unacceptable.”
NFU

The group has published Mr Milner’s address, email and home telephone number and urged its supporters ask him to “stop purchasing potatoes from Cobrey”.

The group says: “It is very important that as many people as possible contact him – if Cobrey farms did pull out of the badger cull, then the amount of land signed up for the badger cull would drop way below the licence requirement of 70%.”

It asks: “So if Cobrey are happy to kill badgers on their land and have the blood of badgers seeping into the soil, we’d like to know, are their customers equally happy?”

A spokesman for NFU South West said: “The badger cull pilots are a perfectly legitimate activity. They are part of the government’s 25-year plan to eradicate bovine TB in this country.

“The pilots needs to go ahead unrestricted and according to the rules laid out.

“Stop the Cull are clearly seeking to intimidate perfectly law-abiding farmers and businesses and publishing the personal details of a company CEO on its website is totally unacceptable.”

Earlier this month, Stop the Cull asked its supporters to lobby Marks & Spencer CEO Marc Bolland to try to persuade his company to stop its asparagus contract with Cobrey Farms.

But the campaign backfired after M&S said it had “no plans to stop sourcing from them [Cobrey]”.

Farm leaders, including from the NFU, Country Land and Business Association and National Beef Association, have accused Stop the Cull of intimidation.

NFU president Meurig Raymond said this type of behaviour was “totally unacceptable” and he urged the police to take further action.

Cobrey Farms has not commented on the Stop the Cull group’s actions. Meanwhile, Farmers Weekly has contacted Tyrrells Crisps for a response.

Badger culls in Dorset, Gloucestershire and Somerset got under way at the end of August/start of September, Defra confirmed.

Last year, almost 33,000 cattle were slaughtered in the UK due to TB, costing the taxpayer an estimated £100m in compensation to farmers.