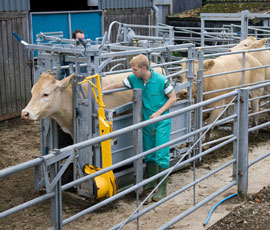 A badger cull to combat bovine tuberculosis is expected to be postponed until next year.

Originally due to take place this autumn, badger culls in two areas of south-west England will not now happen until next summer at the earliest.

The delay comes amid growing concern over the mounting cost of culling and higher than expected badger numbers.

Culling in west Gloucestershire and west Somerset had been expected to begin imminently but is now set to be postponed.

It is understood that DEFRA secretary Owen Paterson has cancelled a trip to the SIAL food fair in Paris and has remained in London to make the announcement.

An NFU spokesman refused to confirm that the cull was being delayed, but said “changes to the timetable” would be announced on Tuesday (23 October).

Higher than expected badger populations in both areas would make it difficult to cull the numbers required before a closed period starts later this winter.

For the cull to be deemed successful, at least 70% of the badgers in each area must be culled during a six-week period.

The NFU said contractors tasked with carrying out the cull had been asked to target 80% of the badger population to ensure they met the 70% target.

Badgers would be culled using a combination of cage-trapping and free shooting. But a closed period on cage-trapping which begins on 1 December is now less than six weeks away.

Although badgers could be shot after 1 December, cage trapping would be outlawed after that date, making it harder to cull enough animals to reach the target.

Earlier, a farming industry source told Farmers Weekly: “We have one chance to get this right – if we don’t, we won’t get a second opportunity.”

Rather than failing to reach the cull target – which would prevent the cull from being rolled out to other areas of the country – it was better to postpone.

Farm minister David Heath revealed last week that the “best estimate” for badger numbers in the cull areas was 3,600 in west Gloucestershire and 4,300 in west Somerset.

This is twice as many as first thought in the west Gloucestershire cull zone and about 60% higher than the original estimate for west Somerset.

If you are a livestock farmer affected by the cull postponement and you’d like to comment, you can contact news reporter Phil Case on telephone number 020 8652 4905 or email philip.case@rbi.co.uk