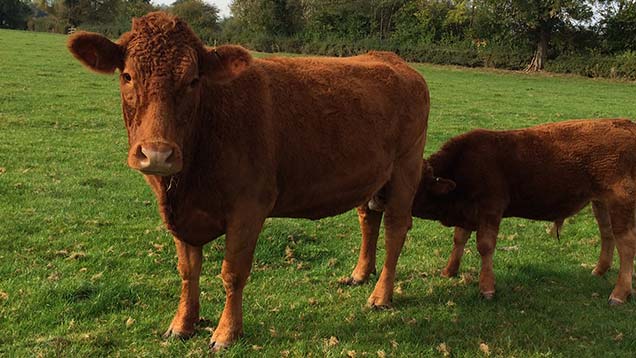 Bovine TB has been found in the herd belonging to the chairman of the Animal Health and Welfare Board for England (AHWBE).

Michael Seals said one of his eight pedigree South Devon suckler cows tested positive for the disease in a routine annual TB test carried out on his farm in south Derbyshire.

“We have had 14 years of freedom from TB, whereas around us just about all our neighbour’s herds have had it,” said Mr Seals, whose board was the author of Defra’s 25-year TB eradication strategy.

“It was quite an emotional moment. This was a home-bred animal, born here in 2010. It was immensely frustrating because we knew the cow very well as an individual.

“We have now been shut down. We’re waiting for the outcome of the post-mortem. It’s either a visual post-mortem, or if there’s no visual, a culture will be made.”

Government vets from the Animal Health and Plant Agency (APHA) took the animal away for slaughter by to a local abattoir on 18 March.

Mr Seals will be cleaning and disinfecting cattle housing and equipment after the removal of the reactor.

He cannot confirm how the disease got into his herd at Hall Farm, a family-owned livestock and arable farm at Sutton-on-the-Hill, where 81ha of wheat, oilseed rape and barley are grown.

“Yes, we have got badger setts on the farm and the cows have been grazing in the fields next to the badger setts for 14 years,” he said.

“But we ploughed up that field this year and we haven¹t grazed that since June or July last year.”

“It was quite an emotional moment. This was a home-bred animal, born here in 2010. It was immensely frustrating because we knew the cow very well as an individual.”
Michael Seals

The cows were moved to graze in another field, which is surrounded by double fencing and a ditch.

Mr Seals runs a closed herd at Hall Farm. The only animals he has bought in in the past seven years were two pedigree bulls – the last one was three and a half years ago.

“We always had a TB test, plus BVD, IBR and Johne’s on these, so there was a high level of biosecurity. That’s the only animal that has been on the farm in that time,” he said.

The forage tends to be haylage, which is cut from fields two to three miles from the farm.

“I’m now one of the several thousand who has had this [bovine TB],” said Mr Seals. “But in a way I’m not surprised. When you live in an area with a level of infection, every year we have tested we have managed to get through and then someone down the road had it. Or a neighbour had it in the other direction.

“However, I was very surprised at the amount of paperwork that followed. I think we could consolidate that.”

He now face an anxious wait until the next scheduled TB test in May.

“The animals have all lived together over the winter. They are now in-calf. If the others have got it from that particular one it’s too late,” he said.

Mr Seals, who is also chairman of the National Fallen Stock Company (NFSCo), said the AHWBE had taken a “holistic approach” to the eradication of TB, which included badger culling.

“The implementation of that [the badger culling policy] has begun and the strategy is moving forward,” he added.

“We were a long way back before we started, but there has been a lot of activity. Hopefully that evidence will demonstrate that the strategy is the right direction of travel.”

More than 33,000 cattle were slaughtered in the UK because of bovine TB last year, according to Defra. Tackling the disease in England costs the taxpayer more than £100m each year.

A Defra spokesman said: “England has the highest incidence of TB in Europe, and over the past two decades the number of cattle slaughtered has increased tenfold.

“That is why we are pursuing a comprehensive strategy to deal with the disease, which includes cattle movement controls, vaccinating badgers in the edge area and culling badgers where TB is rife.

“This approach of tackling the problem in both cattle and wildlife has worked overseas in Australia, Ireland and New Zealand.”