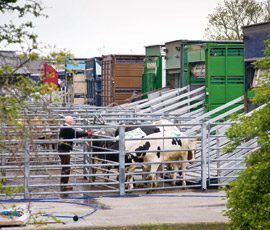 The “utter hell” caused by TB must drive renewed diligence among all cattle farmers in northern counties in their efforts to halt the further spread of the disease.

Lancashire vet Rob Howe, of Lambert, Leonard and May, is calling for a co-ordinated and determined strategy involving farmers, vets, auction marts and animal health staff to combat the growing risk of TB spreading into Lancashire and further north to Cumbria.

“Cattle producers in counties not affected don’t know how lucky they are, but the movement of stock from TB infected areas into Lancashire and Cumbria continues and the risks increase,” says Mr Howe.

“The pre-movement testing used on individual or small numbers of animals should only be considered as a safety-net; as a TB test’s sensitivity is considerably reduced compared with its use in a herd situation.

“There’s a growing risk infected animals that aren’t identified and are moved into clean areas will create a pool of infection in the wildlife they come into contact with.

“If we don’t act fast and focus our attention more on the risks of the spread of TB northwards instead of allowing the issue of badger culling to dominate the TB debate, farmers in Lancashire and Cumbria will soon realise the utter hell this disease causes to farm businesses and to farming families.”
Rob Howe, Lambert, Leonard and May

“If we don’t act fast and focus our attention more on the risks of the spread of TB northwards instead of allowing the issue of badger culling to dominate the TB debate, farmers in Lancashire and Cumbria will soon realise the utter hell this disease causes to farm businesses and to farming families.”

He wants a more vigorous approach from auction marts to help buyers assess the risks when buying stock. “Information given out is usually in bits and pieces. So the ringside will hear that an animal has been pre-movement tested and that it may be from perhaps a one-year or a four-year area. But that level of information isn’t strong enough to give a buyer any real indication about the degree of risk.”

So far this year there have been five cases of TB in Lancashire, one in Cumbria, one in Greater Manchester and one in Merseyside.

While the cities of Manchester and Liverpool – as well as the Manchester Ship Canal – have helped reduce the northward march of TB – vets say the continued trading of cattle from infected regions into Lancashire and Cumbria now presents a massive risk.

More than 200 people attended a meeting in Lancashire organised by Lambert Leonard and May where farmers were given important advice to help them keep TB out of the county.

Mr Howe says: “TB is arriving in Lancashire predominantly via the trading in infected cattle. Any farmer buying cattle privately must have a discussion with his vet beforehand to ensure he is fully aware of the consequences and all purchased cattle should have a post-movement TB test.

“Auction marts need to display clear information about TB to both buyers and sellers and to provide more information at the point of sale to inform buyers of the length of time the herd from which the animal is being sold has been free of TB, the last date of the pre movement test, the date of the herd’s last TB test and the date the animal joined the herd – hopefully its date of birth.

“And farmers must start making feed stores wildlife-proof because if nothing changes it’s inevitable that TB will get into wildlife in Lancashire and Cumbria as it has in other parts of the UK.”

Keep up with all the latest news on TB