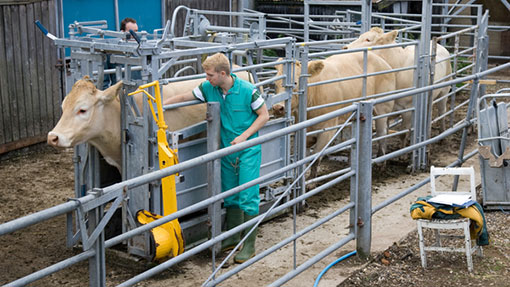 DEFRA has announced a shake-up of TB testing rules for the movement of cattle to and from common land.

Under new rules, from 30 June 2014, the default will be that all cattle older than 42 days that are moving to and from common land in the annual testing area must be pre-movement tested.

However, for movements back from the common, DEFRA said farmers will be allowed to carry out a post-movement test instead as an alternative.

If you have common grazing rights and your cattle are tested annually for TB you are likely to be affected by these changes. You would also be affected if a herd using a common in a four yearly testing area tests positive for TB and triggers 3km radial testing.

Will I need to arrange pre-movement testing to or from the common if the move takes place on or after 30 June 2014?

Yes. You will need to arrange a pre-movement test for the movement back to the holding.

Yes. If it is dangerous or impractical to carry out testing on the common, you will have to post-movement test your cattle between 60 and 120 days after returning from the common. You should contact your local AHVLA office to agree this.

My holding is adjacent to the common and I turn out the cattle every day/frequently. Will I need to pre-movement test every time I move stock?

Not necessarily. In such scenarios, AHVLA may grant a licence to allow your cattle to move without a pre-movement test.

I have grazing rights to a common in the four-yearly tested area (such as Cumbria). Will I need to pre-movement test?

Only if your herd is subject to annual TB testing surveillance.

It said this measure would reflect the fact that in most cases, TB testing on common land is “impractical and dangerous”.

The NFU previously said it was “vital” that farmers have the option of a post-movement testing as an alternative as pre-movement testing before moving cattle back to a farm from common land can be dangerous or impossible in many cases because of the lack of available cattle handling facilities.

DEFRA said in some cases, the Animal Health and Veterinary Laboratories Agency (AHVLA) will consider licensing some cattle movements without pre-movement testing.

However, this would require veterinary approval that an agreed TB “control plan” for the whole of the common would give at least the same level of assurance as testing would provide.

DEFRA said the policy change would ensure all cattle are tested within 60 days of moving on to common land and therefore “help reduce the risk of spreading TB through such cattle movements”.

The change is part of the government’s plans to eradicate bovine TB in England within 25 years.

See also: More on Bovine TB and the badger cull

DEFRA has urged all cattle keepers with common land rights and annually tested herds to familiarise themselves with the new rules.

A spokesman said: “Effective cattle measures are the foundation of our fight against bovine TB, which is the most pressing animal health problem facing cattle farmers in England.

“We remain committed to working with stakeholders to monitor and enhance TB control measures. These latest enhancements strike an appropriate balance between robust disease control and the need to support farm businesses.”

Pre-movement testing of cattle for TB has been in place in England since 2006 to improve TB surveillance and to help detect infected cattle before they move and spread the disease to other herds.