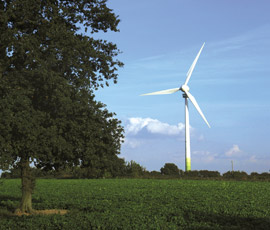 A Gloucestershire green energy company is risking a potential backlash from farmers by speaking out against the badger cull.

Ecotricity in Stroud has pledged its support to Team Badger’s efforts to stop the pilot badger culls, which are due to start any time now as part of government plans to curb bovine TB.

Team Badger is the name given to a group of organisations including Animal Aid, VIVA!, and Gloucestershire Against Badger Shooting (G.A.B.S) – all committed to exploring ways to stop the cull.

“I fully support Team Badger in their efforts in getting this hideous cull stopped,” said Ecotricity founder Dale Vince, in a statement on his company’s website.

“It’s worth considering that if we truly have to virtually wipe out a species such as the badger just to produce milk from cows, then maybe we should be questioning the basis for the dairy industry itself.

“After all, we don’t need cow’s milk to live. We all need to work together to ensure that it does not go ahead.”

He set up wind energy business Ecotricity in 1995. The company has evolved into a key player in the eco energy business, with more than 70,000 customers.

Ecotricity’s website states that Mr Vince “holds treatment of animals close to his heart and actively supports organisations that campaign against cruelty to animals”.

The company is asking people to sign a petition, which has gathered more than 250,000 signatures, to encourage MPs to abandon the proposed cull.

The company states: “Simply go online or pop into the Ecotricity reception on Russell Street, Stroud, to pick up a postcard and send it to Conservative Party policy minister Oliver Letwin.”

One farmer, who did not want to be named, said: “Ecotricity is one of the biggest renewable companies using farmland for windmill placement.

“I think it’s appalling that they make all their money off farmers, but are openly not supporting them with the cull.”

But a spokesman for Ecotricity said the company had not received any complaints from farmers over its stance on the cull.

“The badger cull is a divisive topic and people have different viewpoints on the solutions to bovine TB.

“We are an ethical company, deeply committed to the environment and natural world. We have taken our position based on the evidence available to us. Some people will have a different view.”

Last year, G.A.B.S presented Mr Vince with the Golden Badger Paw award for his opposition to the badger cull.