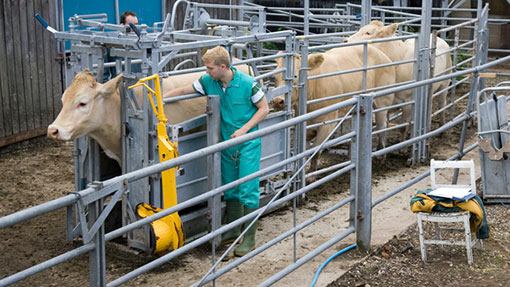 A Dorset farmer has urged Defra secretary Owen Paterson to step in to protect the welfare of his cattle after officials told him that 14 of his TB-infected cows would have to be slaughtered in west Wales.

Kevin Wallbridge, a dairy farmer from Hooke, refused to let contractors hired by the Animal Health Veterinary Agency take his cattle after they told him they would need to travel some 170 miles to be slaughtered.

Mr Wallbridge said it would be cruel to take the animals, some of which are heavily pregnant, on such a long journey, especially when there was a local abattoir in Taunton.

With proper rest breaks, he said the journey would take about 24 hours from when the cattle left his farm to when they were eventually slaughtered, putting their welfare at risk.

But officials from AHVLA, which manages the bovine TB operation in cattle, told Mr Wallbridge that they had a contract with the abattoir in Wales which was offering to pay £200 more than his local slaughter house.

Unless he allowed the cattle to be collected on Tuesday (27 May), he would have to arrange for slaughter himself and would not be able to claim compensation for the infected cattle.

In a meeting with Mr Paterson at the Devon Show on Thursday (22 May), Mr Wallbridge urged the minister to use his influence to change the officials’ minds and allow his animals to be slaughtered locally.

“I fully accept that the cows need to be slaughtered, but their welfare is important and it is not fair to make sick cows travel for so long,” Mr Wallbridge said.

“The pregnant cows are very heavy and it is not fair to have them standing in a lorry for so long, and the milkers would need milking.

“On such a long journey, the odds of them falling over in the lorry and getting trampled and injured increase, and I’m not happy about that.”

Mr Wallbridge said he had offered to pay the £200 difference to ensure his cattle were slaughtered locally, but AHVLA officials were unwilling to budge.

“I explained all this to Mr Paterson and he agreed that it’s utter madness. He promised he would look into it and do something about it, but we only have until Tuesday to get this put right.

“I don’t want to send my cattle to Wales, but if I don’t, I’m going to lose thousands of pounds in compensation.

“I feel like civil servants are making up rules about things they don’t understand. They don’t know about animals and they’re not thinking about the cows at all in this.”

An AHVLA spokesman said the decision to send the cattle to Wales was in a bid to achieve the best value for money for the taxpayer.

“[The AHVLA] selects the abattoir which is likely to provide the best financial return, while also ensuring that journey times to slaughter adhere to welfare during transportation regulations.

“Animals unfit to travel would normally be slaughtered on-farm.

“Cattle owners have the option of choosing not to receive compensation and to arrange slaughter privately.”