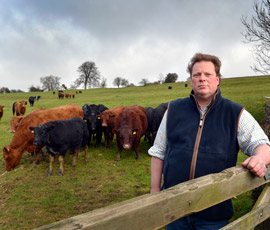 A beef farmer whose life has been blighted by bovine TB opened his farm to show people the destruction caused by the disease.

David Barton invited NFU leaders and councillors to see the crippling effects the disease has had at Manor Farm, in Middle Duntisbourne, Cirencester, Gloucestershire.

Last Thursday (18 May) he loaded two more of his South Devon cows in a lorry to be taken away and slaughtered after they failed a TB test.

“It’s heartbreaking, it really is absolutely heartbreaking,” said Mr Barton. “You have got a calf in there now that is an orphan and the other cow was in-calf. That’s not what I’m farming for.

“I’m between a rock and a hard place because we keep testing our cows. We keep testing them every 60 days and as soon as they react to the test, they’re slaughtered.

“And we keep doing this. Bring them in, slaughter them if they react to the test. But we are not doing anything about the reservoir in the wildlife.”

Addressing the crowd of 50 guests in a field surrounded by picturesque rolling hills in the Cotswolds, he said: “We had our first case of TB in 2001 and since then, 103 of my cattle have been slaughtered. We have had 38 TB tests.

“It’s absolutely soul-destroying because it takes me about five years to produce a heifer that has a first calf. It’s a very slow process.”

Last autumn, three lorry loads of cattle were taken away and slaughtered because of TB.

“A lot of work, passion and dedication were wiped out in a stroke,” he said. “Livestock farmers are all animal lovers in the true sense of the word. Without that passion you simply wouldn’t do it.

“The TB issue has become so devastating here. To lose all these cattle; it takes such a long time to build them up.”

Mr Barton said badger numbers have increased dramatically over the past 20 years – and so have incidences of TB. In the past 15 months, he has lost 50 cows to TB – 50% of his total losses to the disease.

In total, there are five active badger setts around the grazing area, including two on boundaries and one in the middle of the 105ha farm. A number of satellite badger setts are also dotted around fields.

Mr Barton reckons between 40-50 badgers live around his farm, but said it is difficult to give a true estimate of numbers as badgers are nocturnal.

“I don’t dislike badgers. I think they are a great part of the British countryside,” he said.

“But unfortunately, many badgers on this farm have TB, as many do in Gloucestershire. This isn’t a myth – it’s a fact. Some of the figures suggest at least one in three could have TB.”

Mr Barton has a closed herd of about 150 beef cattle, mostly native breeds – South Devons and Sussex cows, which he has crossed with a Saler bull.

“I rarely buy stock in, so where did this devastating disease come from?” he asked. “I have come to the conclusion after many years of farming this farm that the problem we have here is badgers.”

Mr Barton spoke out in favour of a badger cull to get the disease under control.

“In Ireland, the USA, Australia and New Zealand they have done it and it’s working very well. They have taken the action that needs to be taken,” he said.

“We have to work together on this and get healthy badgers and healthy cattle living together.”

He has taken biosecurity measures on farm, such as raising the height of feeders so badgers can’t get in to feed there. Also, when the cattle come in they are kept far away from badgers.

But Mr Barton said it was impossible to keep badgers and cattle apart, as nine to 10 months of the year his cows are grazing in fields.

Although his farm is located outside the government’s pilot badger cull area in Gloucestershire, Mr Barton said he would allow badgers to be culled on his land.

NFU vice president Adam Quinney, who attended the farm walk last Friday (17 May), said bovine TB was increasing by about 10% annually and the UK cannot wait 10 years for a vaccine that “might be effective”.

He is “very confident” the pilot culls will go ahead this summer as planned in west Gloucestershire and west Somerset.

The cull licences are in place and the pilots could begin any time from 1 June, but the farmers and contractors will decide the best time to begin.

Mr Quinney said: “We are not anti-badgers, we are anti-TB. Any badger cull that will happen in the future will only be in areas with a high incidence and long history of TB, such as Gloucestershire.

“This will not be a nationwide rollout. If the pilot areas are successful – and I predict they will be – it’s about focusing on the areas that have long-term significance.”